PH, US joint drills may increase tensions with China – fishers 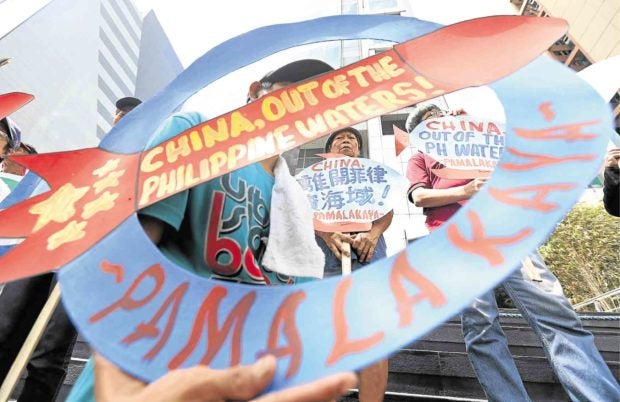 In this file photo, taken in May 2018, fishermen’s group Pamalakaya holds a rally in front of the Chinese Consulate in Makati City to protest Chinese incursions into Philippine fishing grounds. (INQUIRER FILE PHOTO)

MANILA, Philippines — An alliance of militant fisherfolk firmly opposed on Tuesday the joint war exercises between troops of the Philippines and the United States, noting they might further increase tensions over the West Philippine Sea.

In a statement, the Pambansang Lakas ng Kilusang Mamamalakaya ng Pilipinas (Pamalakaya) stressed its objection to Kamandag 6, or the Kaagapay ng mga Mandirigma ng Dagat (Cooperation of the Warriors of the Sea) military drills, as it might provoke China to ramp up its military buildup in the disputed waterway.

A total of 639 Filipino and 2,550 US marines, together with troops from South Korea and Japan, are conducting the exercises in Palawan and Batanes from Oct. 3 to 14.

“Our territorial waters in the West Philippine Sea are already militarized by China, and the last thing we need is another superpower carrying out power-projection and naval operations that pose another security threat to Filipino fishers. We want our fishing grounds demilitarized so we could fish in peace,” Bobby Roldan, Pamalakaya vice chair, said in a statement.

He also underscored Pamalakaya’s objection to “a military intervention of any superpower under the guise of joint military exercise.”

“We reassert that any foreign military activities that give extraterritorial rights to foreign troops in our land and waters is an affront to national sovereignty and territorial integrity,” Roldan added.

Pamalakaya cited the call for the administration of President Ferdinand Marcos Jr. to pursue a peaceful and diplomatic route – while still adhering to an independent foreign policy – in settling the country’s territorial dispute with the Asian giant.

China has repeatedly dismissed the historic ruling of the Permanent Court of Arbitration that the Philippines, thus rejecting China’s nine-dash line claim over the contested waterway.