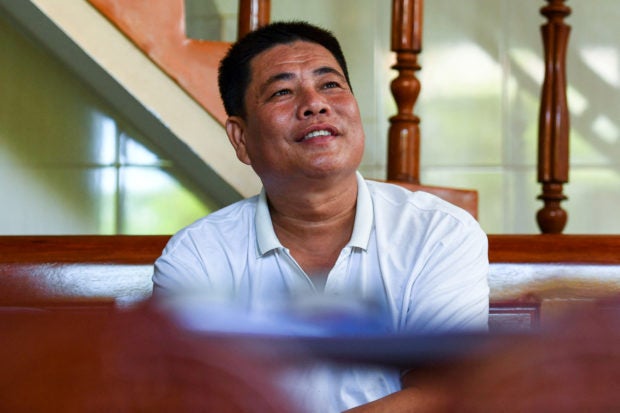 LY SON, Vietnam — Vietnamese fisherman Nguyen Van Loc has been attacked by Chinese coast guard vessels so many times, he has lost count.

One summer day in 2020, while sailing through the Paracel Islands — resource-rich waters in the South China Sea claimed by both Hanoi and Beijing — his boat was rammed by a Chinese ship repeatedly until it capsized.

Thirteen of his crewmen were left clinging to a fishing basket in the water, desperately awaiting help.

Loc, 43, was beaten over and over, while his boat was stripped of their catch, tools and fishing gear.

Some years before that, two Chinese vessels with large machine guns — and crew armed with axes — slammed into Loc’s boat and followed them closely as they tried to make their way home.

Now swathes of the disputed sea – where he began fishing as a boy aged 15 — are no-go zones, while other parts are so overfished that he spends just an hour where he used to pass the whole day.

“We used to get scared,” Loc told AFP. “But now this is just our normal life.”

Vietnam’s ministry of foreign affairs asked Beijing to investigate the incident — widely reported in Vietnamese media — at the time, and other fishermen from Ly Son island told AFP of similar experiences of harassment at sea.

Since 2014, 98 Vietnamese boats have been destroyed by Chinese vessels, according to figures from the local fishing association on Ly Son, home to hundreds of fishermen and their families whose livelihoods depend on trips out to sea.

Beijing claims almost the entirety of the South China Sea, a waterway of immense strategic importance through which trillions of dollars worth of trade transits every year.

There are rival claims to part of the sea from neighbors including Vietnam, but China has become increasingly aggressive in asserting itself in the area under President Xi Jinping, who is expected to secure a record third consecutive term this month.

Close to the water’s edge, where a line of women wearing traditional conical hats sorts the day’s catch, lies Ly Son’s ship repair yard. But it is ill-equipped to handle the hefty damage inflicted on the boats.

Many are forced to sail to the mainland, putting them out of action for days.

Beijing gained control of the Paracel Islands in 1974 after clashes with the South Vietnamese Navy that left 75 Vietnamese troops dead.

Today, Chinese coast guard vessels shoot down the Vietnamese flags that flutter over the cabin of each fishing boat, according to Ly Son’s fishing association, and mostly the crew have no choice but to sail away, fearful of the consequences if they stand their ground.

Over the last three decades, 120 fishermen from Ly Son have died due to attacks by Chinese vessels or because boats from China refused to come to their aid during poor weather, the local fishing association said.

“Our vessels are small,” said Loc. “If we are chased, then we run.”

But Loc, like many of his fellow fishermen, remains committed to the waters, where his grandfather and father fished before him.

“This fishing ground belonged to our ancestors, we will never give it up.”