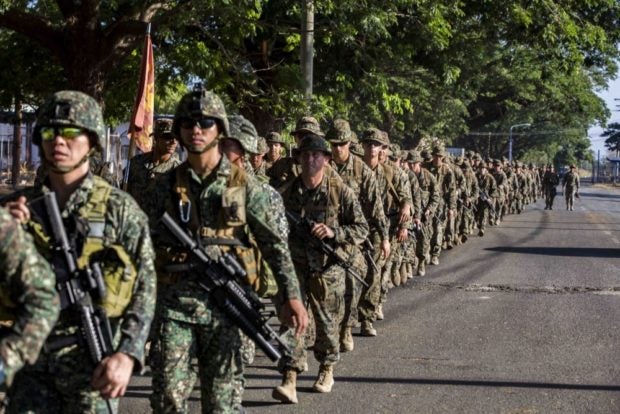 MANILA, Philippines — The week-long maritime exercises of the Philippines, United States, and Japan are not in any way connected to the country’s territorial dispute in the South China Sea.

“First of all, this is not something related to the South China Sea. Let us be clear on that,” Brig. Gen. Ariel Caculitan, exercise director for Kamandag (Venom), told reporters Monday.

Territorial disputes between Manila and Beijing have continued, and incidents are reported from time to time over the disputed waterway despite improved relations under President Rodrigo Duterte.

Both the US and Japan are known to play an active role in countering China’s growing military and political power in the region.

The annual Kamandag, which also stands for “Kaagapay Ng Mga Mandirigma Ng Dagat,” or “Cooperation of Warriors of the Sea,” kicked off on Wednesday in Subic Bay.

In the next 10 days, around 2,000 combined forces from the Philippines, US, and Japan will conduct amphibious operations, live-fire training, urban operations, aviation operations, and counterterrorism response operations across selected areas in Luzon.

Maj. Gen. Shinichi Aoki, commanding general of the Japan Ground Self-Defense Force, sees this event as an opportunity to boost their capabilities in amphibious operations.

“In Japan, we don’t have any suitable for beach landing. So this is a very great chance,” he said.

With the country’s archipelagic nature, the training for this capability is important, Caculitan said.

“If you are able to land tanks or AAVs in one island, that would certainly draw a big impact on the psychological capacity of the enemy of the terrorists there,” he said.