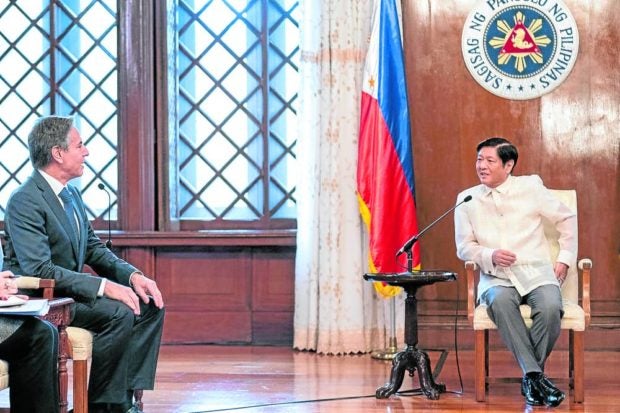 COMMITTED US Secretary of State Antony Blinken speaks with President Marcos in Malacañang on Saturday about the taut situation in the region as massive Chinese military drills encircle Taiwan. Mr. Marcos tells Blinken, the highest US official to visit the country since his inauguration, that the developments “point to the fact of the importance” of US-Philippine ties. —REUTERS

MANILA, Philippines — US Secretary of State Antony Blinken met with President Ferdinand “Bongbong” Marcos Jr. in Malacañang on Saturday offering reassurance that his country would honor its commitments to the Philippines under the decades-old Mutual Defense Treaty (MDT) amid rising tensions in the region.

“We’re committed to the Mutual Defense Treaty. We’re committed to working with you on shared challenges,” Blinken, the highest American official to visit the country since the President’s inauguration on June 30, told Marcos during the meeting.

Blinken assured Marcos that the “alliance is strong” between Manila and Washington and “can grow even stronger.”

But as the US diplomat pledged aid should the country face aggression from other forces, the reverse could also be true, according to a Philippine security official who raised the possibility of Manila being compelled to assist Washington under the same defense pact.

Such a scenario was only made more plausible by Washington’s escalating feud with Beijing in the aftermath of US Speaker Nancy Pelosi’s politically charged trip to Taiwan, a self-ruled island claimed by China, Michael Eric Castillo, deputy director general of the National Security Council (NSC), said on Wednesday.

“Do we have procedures on how to execute the request if America asks for assistance in case it gets involved into an armed conflict in the Asia-Pacific region?” the NSC official said on the radio show called “Up Up Pilipinas.”

Signed in 1951, the MDT binds the Philippines and the United States to defend each other against armed attack in the Pacific.

Washington has reiterated its commitment to defend Manila against any armed attack on Philippine armed forces, public vessels or aircraft in the South China Sea amid Beijing’s aggression and expansion activities in contested waters.

Military activity around Taiwan — located north of the Philippines — increased ahead of Pelosi’s arrival on the island on Tuesday as China carried out drills to simulate attacks while the United States deployed warships, including a nuclear-powered aircraft carrier, near the area, likely to provide security escort to the Speaker.

China sees Taiwan as a renegade province and has threatened retaliatory action for the high-profile visit of Pelosi, the highest-elected American official to visit Taipei since 1997.

China kicked off its largest-ever military air and sea exercises around Taiwan on Thursday, a day after Pelosi’s departure, and will run until Sunday.

Chinese fighter jets and warships reportedly conducted exercises along the so-called median line of Taiwan Strait, which separates Taiwan and China. Castillo said he was not aware of any preparations by the Armed Forces of the Philippines in case it was dragged into warfare between the two superpowers. “I’m not saying there is none … I do not have any personal knowledge if there is any contingency that exists,” he said.

The Philippine military and its US counterpart, however, have carried out combat exercises in previous months in northern Philippines facing Taiwan.

While Castillo believes China would not initiate an open armed conflict with the United States because of Pelosi’s visit, he said the Philippines should still prepare for “contingencies.” “While we don’t have the intention of engaging in a war with any country, we might be caught in crossfires with warring countries,” he said, adding that: “We need to prepare immediately and urgently for a capability to respond to foreseeable contingencies, and this contingency with the Pelosi visit is one of the possible contingencies that we need to prepare for.”

During Saturday’s meeting, Marcos told Blinken that the MDT was “in constant evolution” as he recognized the volatile situation in the region following Pelosi’s Taiwan visit.

“To be perfectly candid, I did not think it raised the intensity, it just demonstrated it — how the intensity of that conflict has been. It actually has been at that level for a good while, but we got used to it and put it aside,” the President said.

“So again, this just points to the fact of the importance of the relationship between the United States and the Philippines,” Marcos said.

Present at the meeting were other US officials, including US Ambassador to Manila MaryKay Loss Carlson and Principal Deputy Assistant Secretary for East Asian and Pacific Affairs Kin Moy.

The United States has a complex relationship with the Philippines — and the Marcos family. Marcos’ namesake father, the late dictator whose rule ended with the peaceful 1986 Edsa People Power Revolution, went into exile in Hawaii.

After his predecessor Rodrigo Duterte kept an antagonistic stance toward the United States while being friendly to China, Marcos has indicated he will strike a balance between the two powers, which are vying to have the closest ties with his administration.

Also on Saturday, Blinken appeared at a virtual joint press conference with Foreign Secretary Enrique Manalo, who said the Philippines was ready to “help in any way to reduce the tensions” between the United States and China over Taiwan.

“The Philippines and the Asean (Association of Southeast Asian Nations) have always been ready to see how we can help in any way to reduce the tensions,” Manalo told reporters.

Blinken assured regional allies, including the Philippines, that it was “not in the interest” of Taiwan or the United States to further escalate the situation.

“We’ll keep our channels of communication with China open with the intent of avoiding escalation due to misunderstanding or miscommunication. In the days to come, you will see the United States remaining steady,” he said.

—WITH A REPORT FROM AFP AND KATHLEEN DE VILLA

Blinken aide: US rebuffs China ‘aggression’ in SCS; PH rights must be defended

US stands by obligations to PH under MDT – envoy