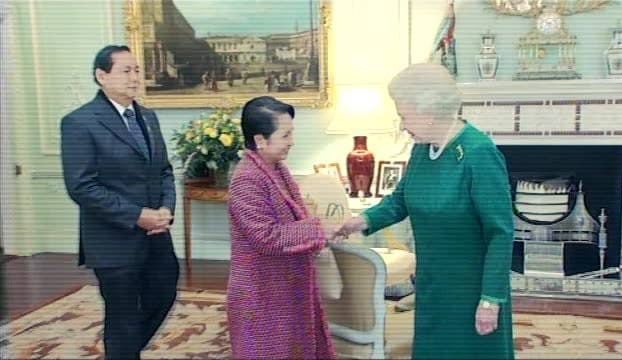 An image posted by Pampanga Rep. Gloria Macapagal-Arroyo on Facebook showed her and former First Gentleman Mike Arroyo during their courtesy call to the late Queen Elizabeth at Buckingham Palace in 2007.

MANILA, Philippines — Former president and now House of Representatives Senior Deputy Speaker Gloria Macapagal-Arroyo has offered her condolences to the Royal family following the death of Queen Elizabeth II, saying that she will forever treasure the late monarch’s advice.

In a statement on Friday, a few hours after the longest-serving British sovereign died, Arroyo said that Queen Elizabeth II gave her some advice and encouragement when the former president visited Her Majesty.

“I am deeply saddened to hear the passing of Her Majesty Queen Elizabeth II.  The world will always remember her long and glorious reign,” Arroyo said.

“I will forever cherish Her Majesty’s advice and encouragement when we visited her during my presidency.  My sincere condolences to the entire Royal family and the peoples over whom she reigned,” she added.

The caption on Arroyo’s post said that the visit happened in December 2007.

President Arroyo and First Gentleman Jose Miguel Arroyo with Queen Elizabeth II in the Buckingham Palace on December 6, 2007. The video is courtesy by Getty Images.

Arroyo’s post earlier meanwhile showed a picture of her and the Queen during the said visit.

Earlier, lawmakers from the House of Representatives led by Speaker and Leyte Rep. Ferdinand Martin Romualdez mourned the death of Queen Elizabeth, saying that Her Majesty was an inspiration for many generations of public servants, as she was an image of stability for the United Kingdom.

Queen Elizabeth died early morning of Friday (Manila time) after Buckingham Palace announced that she was under medical supervision Thursday night, and that her immediate family have been summoned to Balmoral Castle in Scotland once doctors expressed serious concern over her health.