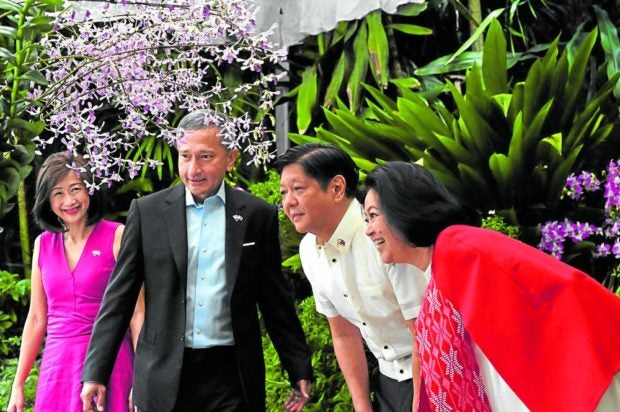 MANILA, Philippines — The Philippines signed six pacts with Singapore during the two-day visit of President Ferdinand Marcos Jr. to the city-state, including an agreement on the deployment of more Filipino health-care workers, cooperation on counterterrorism and data protection, and the development of New Clark City in Tarlac province.

Before returning to Manila on Wednesday evening, Marcos called on Singaporean President Halimah Yacob to discuss key issues in Southeast Asia, particularly peace and stability in the West Philippine Sea, as well as closer cooperation for pandemic recovery.

The two heads of state “reiterated Asean’s [Association of Southeast Asian Nations] consistent position on the South China Sea and reaffirmed the importance of maintaining peace, security, stability, safety, and freedom of navigation and overflight in and above the South China Sea,” according to a statement by the two governments.

The joint statement stressed the importance of “peaceful resolution of disputes without resorting to threat or use of force, in accordance with international law, including the 1982 United Nations Convention on the Law of the Sea (Unclos), which is of universal character and sets out the legal framework within which all activities in the oceans and seas must be carried out.”

According to the Department of Foreign Affairs (DFA), the president’s state visit “reflects the abiding bonds of friendship between the government and peoples of both countries and the strong mutual commitment to further strengthen Philippines-Singapore relations.”

“Our peoples share close bonds of friendship and amity which have continued to flourish even during the COVID-19 pandemic, as well as the restoration of travel links following the easing of the global COVID-19 situation,” the DFA said.

In the joint statement, Halimah expressed Singapore’s “appreciation for the invaluable contributions of Philippine health-care workers and frontline personnel to Singapore’s COVID-19 response.”

The Philippines’ Department of Migrant Workers signed a joint communique with Singapore’s Ministry of Health that “will pave the way for the continued deployment of Filipino health-care professionals to Singapore as well as greater bilateral cooperation in the field of health care.”

Other bilateral agreements signed during the state visit were:

• Arrangements between the Singapore Armed Forces and the Armed Forces of the Philippines concerning the assignment of a team to the Regional Counter-Terrorism Information Facility in Singapore;

• Memorandum of Understanding between the Bases Conversion and Development Authority of the Philippines and Enterprise Singapore for Singapore and Philippines to collaborate on business opportunities on the development of New Clark City;

• Memorandum of Understanding between the Metropolitan Waterworks and Sewerage System of the Philippines and the Public Utilities Board of Singapore on water collaboration.

Marcos and Halimah also discussed the turmoil in Myanmar (Burma) and jointly called for the release of all political detainees in the country, including President U Win Myint and State Counselor Aung San Suu Kyi.

“The leaders expressed deep concern about the situation in Myanmar, including the prolonged political crisis in the country and the recent execution of four opposition activists,” according to the statement.

The two also discussed measures to mitigate the impact of COVID-19, both agreeing “that there is a need to place sustainable measures to allow the reemergence of the economy,” their statement said.

Before Singapore, Marcos went on a three-day state visit to Indonesia from Sept. 4 to 6, from which he and his delegation secured some $8.5 billion in investment pledges.

During that trip, the Marcos witnessed the signing of the Philippines-Indonesia Plan of Action for 2022-2027, the Agreement on Cooperative Activities in the Field of Defense and Security, an MOU between the National Commission for Culture and the Arts and the Ministry of Education, Culture, Research and Technology of Indonesia on Cultural Cooperation, and an MOU for Cooperation on the Development and Promotion of Creative Economy.

It was Marcos first official travel overseas since assuming the presidency on June 30.

The president arrived at Ninoy Aquino International Airport around 10:30 p.m. on Wednesday.