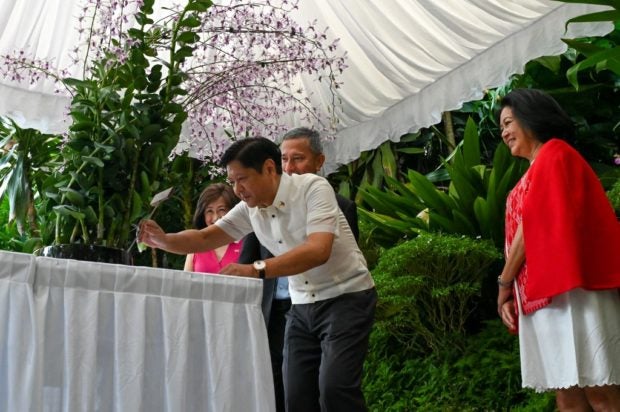 MANILA, Philippines — President Ferdinand “Bongbong” Marcos Jr. announced on Wednesday that he was able to secure $14.36 billion worth of investment pledges in his recently concluded inaugural state visits to Indonesia and Singapore this week.

These, he said, were in sectors of renewable energy, data centers, e-commerce, broadband technology, startups, government housing, and agriculture.

The pledges were enclosed in 10 letters of intent and 12 memoranda of understanding from 22 Indonesian and Singaporean investors.

“This will support our country’s economic recovery efforts and create more jobs for Filipinos here in our country,” Marcos said in his speech during his arrival at the Ninoy Aquino International Airport Terminal 2.

He pointed out that securing foreign investments was one of his promises in his first State of the Nation Address, saying the ones secured in Indonesia and Singapore were “just the beginning.”

“We look forward to doing the detailed work that is necessary to bring all of these proposals to fruition and that is what we are all now going to bend ourselves to this work. We will not stop until we can come back and say that these MOUs  and letters of intent would bear results,” he added.

He recalled how he met with Indonesian President Joko Widodo to “comprehensively discuss our overall bilateral ties with Indonesia,” covering defense, security, maritime cooperation, and trade and investment and people-to-people ties.

He also said he and Widodo discussed the “delimitation” of each of the countries.

“We renewed our commitment to stronger bilateral cooperation as fellow Asean [Association of Southeast Asian Nations)] members and as two of the largest maritime nations in the world,” Marcos said.

“Notably, President Widodo and I discussed the delimitation of our boundaries, respective to our continental shelves, which I hope can become a template for resolving conflicting claims,” he added.

They also talked about the Philippines importing fertilizers from Indonesia and increasing coal imports for the country’s energy supply, Marcos said.

He also recalled his meeting with Singapore President Halimah Yacob and Prime Minister Lee Hsien Loong, during which they “highlighted the deep and enduring frienship” between the Philippines and Singapore.

“The visits also offered us an opportunity to exchange views with the leaders of Indonesia and Singapore on important regional and global issues that affect security in our region,” he said.

“We were cognizant of our roles as neighbors and partners in Asean. We all share the view that in this time of geopolitical turmoil and uncertainty, unity, mutual respect and the principle of sovereign equality should always prevail in our efforts to uphold peace and stability and an environment conducive to our continued national development,” Marcos added.

In his state visits, Marcos said he also witnessed the signing of agreements with Indonesia to “deepen ties from defense, security to the creative economy and even to culture.”

He added the Philippines and Indonesia agreed to pursue joint activities for the next five years.

Marcos said he and the Philippine economic team also met with the business sectors of the two countries, where they explained the administration’s policies and economic priorities “to promote the Philippines as an investment destination.”

“Indonesia and Singapore are key trade and investment partners of the Philippines. More notably Singapore is our top trading partner in Asean and sixth worldwide and our top source of approved investments last year,” he said.

During his trips, Marcos also visited the Filipino communities in Indonesia and Singapore.