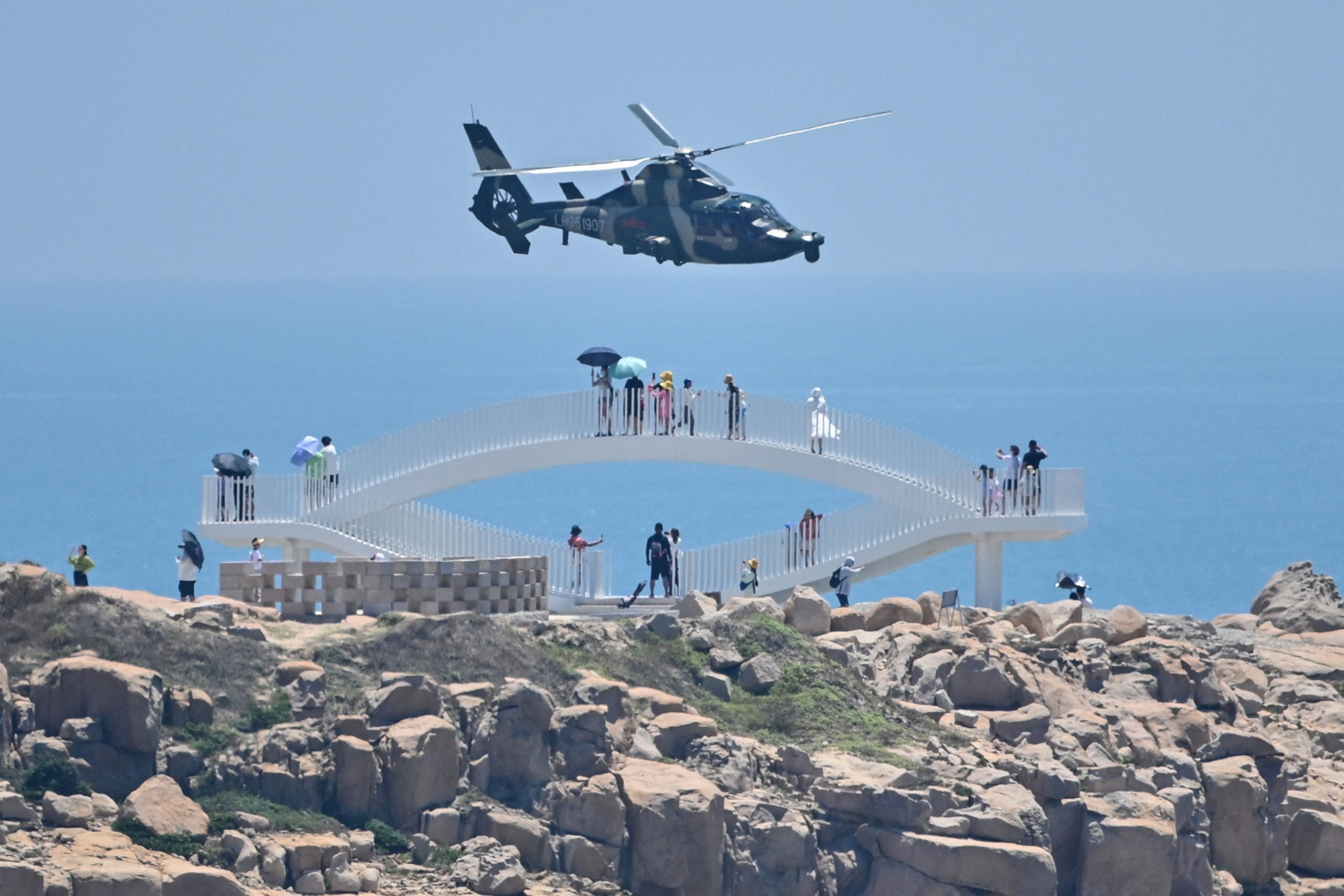 Tourists look on as a Chinese military helicopter flies past Pingtan island, one of mainland China’s closest point from Taiwan, in Fujian province on August 4, 2022, ahead of massive military drills off Taiwan following US House Speaker Nancy Pelosi’s visit to the self-ruled island. (Photo by Hector RETAMAL / AFP)

MANILA, Philippines — The Chinese ambassador to the Philippines on Sunday defended China’s  live-fire military exercises that were carried out in the vicinity of Taiwan following the visit of U.S. House Speaker Nancy Pelosi to the self-governing island.

According to Chinese Ambassador to the Philippines Huang Xilian it was the United States that was being “irresponsible” by letting Pelosi visit Taiwan despite the One China Policy.

“The Chinese government has every right to do whatever is necessary and justified to resolutely uphold our sovereignty and territorial integrity. China has acted in legitimate self-defense only after the US made this egregious provocation,” said the top Chinese envoy in the country in a statement.

Huang made the statement after U.S. Secretary of State Antony Blinken on Saturday (Manila time) accused China of taking “irresponsible” actions and shifting its priorities away from peaceful resolution and toward the use of force.

Huang then noted that it is the U.S. that must take full responsibility as China had already warned Washington several times of the “grave nature and severe harm“ of Pelosi’s visit.

“They are also about staunchly safeguarding regional peace and stability and international law and basic norms governing international relations,” he added.

Huang reaffirmed there is only one China, and both the mainland and Taiwan belong to it under the One China Policy, accusing the U.S. of breaking this status quo with the “Taiwan independence” separatist forces.

He also accused the U.S. of further destabilizing the region amid the COVID-19 pandemic, calling Pelosi’s visit a “farce.”

Huang said that if the U.S. is indeed  serious in its plans to de-escalate the tension, it should then “fulfill its commitment on the Taiwan question to respecting China’s sovereignty and territorial integrity, stop interfering in China’s internal affairs and stop conniving at and supporting ‘Taiwan independence’ separatist forces.”

Huang also earlier “reminded” the Philippine government to “adhere” to the One China Policy, which senators took offense to, as they reminded the Chinese envoy not to “meddle” with Philippine foreign policy.