Blinken: China’s reaction to Pelosi’s Taiwan visit ‘very concerning to countries in region and beyond’ 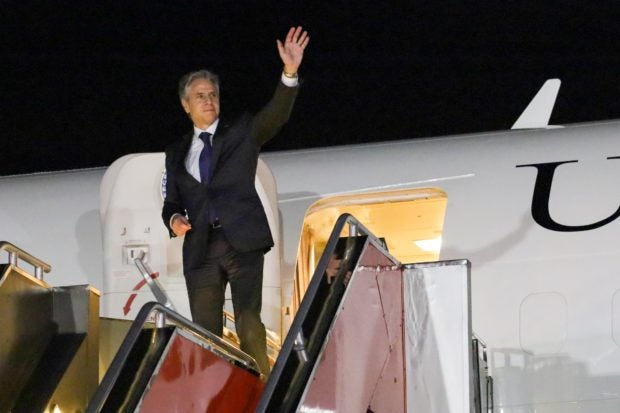 US State Secretary Antony Blinken waves as he boards a plane after wrapping up his visit to the Philippines. Image from Twitter / US Embassy in the Philippines

MANILA, Philippines — China’s reaction to United States House Speaker Nancy Pelosi’s visit to Taiwan is “very concerning to countries throughout the region and even beyond,” US Secretary of State Antony Blinken said Monday.

Speaking in an ABS-CBN New Channel interview, the US’ top diplomat pointed out that other members of the US Congress have visited Taiwan prior to Pelosi, while lamenting that China’s show of force in positioning ships near the Taiwan Strait that “could have impeded commerce moving through the strait.”

“So much commerce goes through that strait that’s critical to the global supply chain. That is interrupted, it’s going to be a problem for everyone,” Blinken said.

“I think this reaction by China is something that is very concerning to countries throughout the region and even beyond. That’s what I heard in the couple of days that I’ve been here, including most recently in Cambodia,” he added.

Blinken said that countries are looking at the two of the world’s superpowers to “act responsibly, and when there are differences between the United States and China, that we manage them responsibly.”

“That’s what we’re focused on doing. We are not going to overreact ourselves and we hope that China engages in the responsible management of what differences we do have,” Blinken said.

Pelosi earlier visited Taiwan, which China considers to be part of its territory. Pelosi, second in line to the presidency, is the highest-profile elected US official to visit Taiwan in 25 years.