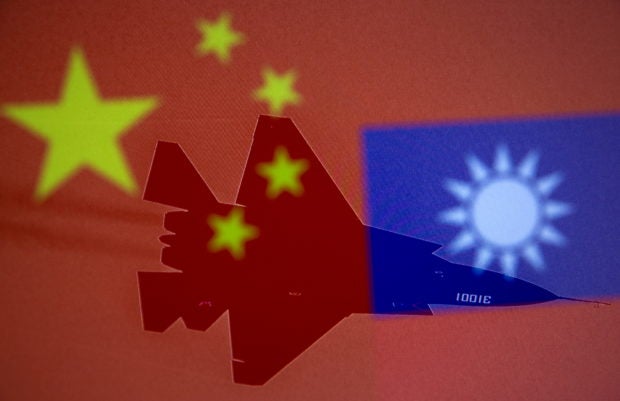 Chinese and Taiwanese national flags are displayed alongside a military airplane in this illustration taken April 9, 2021. REUTERS/Dado Ruvic/Illustration

MANILA, Philippines — The scheduled visit of United States (US) House Speaker Nancy Pelosi to Taiwan does not sit well with China.

Chinese Ambassador to the Philippines Huang Xilian expressed disagreement with Pelosi’s visit as he claimed that Taiwan is part of their territory.

“China firmly opposes any official exchange or visit between the US and Taiwan region of China,” Huang was quoted as saying in an interview.

“This position is clear and consistent. There is only one China in the world. Taiwan is an inalienable part of China’s territory,” he added.

Huang also claimed that the One China policy is the political foundation of diplomatic relations between them and 181 nations across the globe including the US.

The policy is likewise the core of the three Sino-US joint communiqués, said the envoy.

Huang said that Pelosi’s visit will “seriously violate” the One China policy, warning of the potential consequences.

“Should Speaker Pelosi insist on making a visit to Taiwan region in disregard of China’s strong objection, such a visit will seriously violate the one-China principle and the stipulations in the three Sino-US joint communiqués, seriously harm China’s sovereignty and territorial integrity, seriously undermine the political foundation of China-US relations, seriously jeopardize peace and stability across the Taiwan strait, and send a gravely wrong signal to ‘Taiwan independence’ separatist forces,” he explained.

“As we have made clear, should the US side insist on doing so, China will take strong and resolute measures to safeguard our sovereignty and territorial integrity. The US side and ‘Taiwan independence’ separatist forces must assume full responsibility for any ensuing consequences,” he further cautioned.

Huang likewise called on the Philippines to abide by the One China principle and handle issues related to Taiwan with prudence to ensure the development of bilateral ties between Beijing and Manila.

Despite China’s warnings, the US insisted that it has a right to visit Taiwan.

The Department of Foreign Affairs has also pointed out the importance of communication between China and the US “to avoid any miscalculation and further escalation of tensions.”

Read Next
Philippines joins calls to end violence in Myanmar
EDITORS' PICK
House energy committee chair Arroyo bats for cheap electricity
Powered by style, innovation and passion
A laptop that maximizes your WiFi so you can maximize your productivity
Red-tagged green activist recalls imprisonment
Authors unbowed after gov’t ‘purge’ of books
‘FPJ’s Ang Probinsyano’ officially ends after nearly 7 years
MOST READ
Arjo Atayde reveals proposal to Maine Mendoza was ‘more than a year’ in the making
Man, girlfriend found dead in Leyte river
Jalen Green has no doubt Kai Sotto will make the NBA
Authors unbowed after gov’t ‘purge’ of books
Don't miss out on the latest news and information.