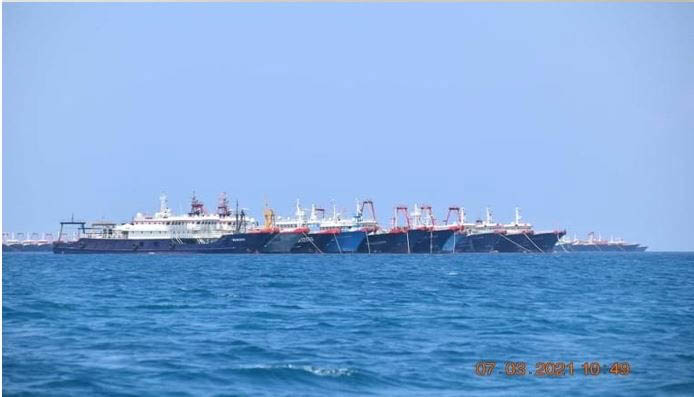 Photo shows some of the 220 Chinese vessels anchored in disputed waters in the South China Sea. —REUTERS FILE PHOTO

MANILA, Philippines — China is showing increasingly “aggressive and irresponsible behavior” in the South China Sea which it claims almost in its entirety and it will only be “a matter of time” before its actions trigger a “major incident” in the disputed waters, American officials warned on Tuesday.

There is a “clear and upward trend” of Chinese “provocations” against other countries that are lawfully operating in the region, said Jung Pak, deputy assistant secretary for East Asia at the US Department of State, during a forum hosted and livestreamed by US think tank Center for Strategic and International Studies in Washington DC.

China has overlapping claims over parts of the South China Sea with the Philippines, Vietnam, Brunei, Malaysia and Taiwan. An arbitration tribunal ruled in 2016 to reject its sweeping claims to the waters but Beijing refuses to recognize the ruling.

Speaking in the same forum, Ely Ratner, assistant secretary of defense for Indo-Pacific Security Affairs, said Chinese provocative actions in the South China Sea are not isolated incidents and they had “increased dramatically” in the last five years, “with dozens of dangerous events in the first half of this year alone.”

“Beijing is systematically testing the limits of our collective resolve and advancing a new status quo in the South China Sea that flies in the face of our shared commitment to the respect for sovereignty, peaceful resolution of disputes and adherence to international law,” he said.

“This aggressive and irresponsible behavior represents one of the most significant threats to peace and stability in the region today, including in the South China Sea,” he said. “And if the PLA (People’s Liberation Army) continues this pattern of behavior, it is only a matter of time before there is a major incident or accident in the region.”

The US officials made the comments ahead of an anticipated call between US President Joe Biden and Chinese President Xi Jinping this week, which is expected to focus on ways to prevent the growing US-China rivalry veering into conflict, particularly over the self-ruled Chinese-claimed island of Taiwan.

Their remarks also came ahead of next week’s meetings of Southeast Asian foreign ministers and partners, including the United States, in Cambodia.

China has been employing its military, maritime militia and state-owned enterprises “at a pace unseen before,” threatening peace and stability in the region, Ratner said.

To deal with this challenge, the United States is helping its allies and partners by “bolstering” their self-defense capabilities.

He said the United States would help beef up their intelligence, surveillance and reconnaissance through the Indo-Pacific Partnership for Maritime Domain Awareness (IPMDA), which aims to build a “common operating picture” that will allow them “to better detect and counter illicit activities in their territorial waters,” he said. The IPMDA was initiated by the Quad, comprising the United States, India, Australia and Japan.

Ratner said, however, that the United States was not seeking confrontation and conflict.

“Our primary interest is in upholding the order that has for decades sustained the region’s peace,” he said, adding that there were open communication lines between Washington and Beijing and with Chinese defense leaders “to ensure we can prevent miscalculations.”

The United States is also negotiating with the Philippines on possible new sites for the Enhanced Defense Cooperation Agreement (Edca), he said. Edca allows the US military to build facilities and preposition military material in several Philippine military bases. It was signed in 2014 but the implementation was stalled during the Duterte administration.

“The sustainment of cooperation and strategic partnership between the naval forces of the Philippines and the United States was the main takeaway during the courtesy visit of the Secnav,” the Philippine Navy said in a statement.

The US Embassy in Manila hosted a reception to celebrate the naming of a US Navy warship after Telesforo Trinidad, the only Filipino recipient of the US Medal of Honor.

—WITH A REPORT FROM AGENCE FRANCE-PRESSE

Read Next
Senate adopts resolution expressing ‘profound sympathy’ for death of ex-PM Abe
EDITORS' PICK
A laptop that maximizes your WiFi so you can maximize your productivity
Why Tagle is a leading papal contender
In Borongan, nuns play hoops (not mahjong)
Powered by style, innovation and passion
House energy committee chair Arroyo bats for cheap electricity
KWF has no power to ban, censor written works – Lagman
MOST READ
Why Tagle is a leading papal contender
Zubiri on SRA mess: Shameful, disgusting
SRA officials should resign after ‘illegal sugar order’ – Zubiri
Arjo Atayde reveals proposal to Maine Mendoza was ‘more than a year’ in the making
Don't miss out on the latest news and information.