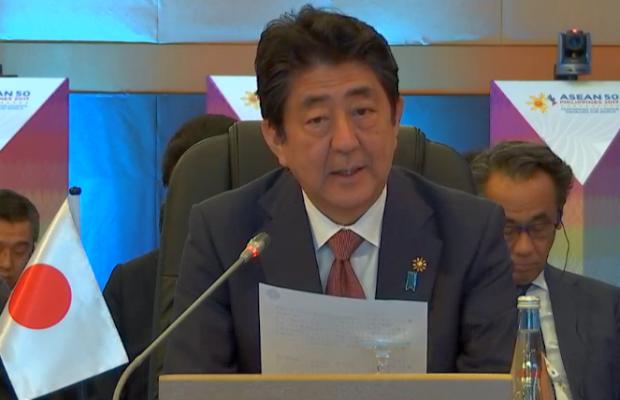 MANILA, Philippines — The Senate has adopted a resolution expressing its “profound sympathy and sincere condolences” for the death of former Japanese Prime Minister Shinzo Abe.

Abe, the longest-serving prime minister in Japan, was gunned down in Nara in south-central Honshu last July 8.

“Prime Minister Shinzo Abe was regarded as a great political leader and a revered statesman. His untimely death, without a doubt, is a tragedy not only to his family and Japan, but to the world. He was a leader with a vision that transcends generations,” Senate President Pro Tempore Loren Legarda said during a plenary session on Wednesday.

She later added: “At this time of his tragic loss, I join the people of Japan, especially his wife, Mrs. Akie Abe, in mourning the loss of a great leader, and a friend of the Philippines.”

Japanese Ambassador to the Philippines Kazuhiko Koshikawa was also present during the Senate session to witness the senators’ adoption of the resolution.

Several senators recalled the strengthened relations maintained between the Philippines and Japan during Abe’s term.

“Prime Minister Abe was an exceptional leader whose impact was felt not only in Japan but in our country as well. He was a very good friend to the Philippines, and it was under his leadership that Japan and the Philippines were really able to strengthen our bilateral relationship,” Senate President Juan Miguel Zubiri said.

In 2015, Japan became the top trading partner of the Philippines, overtaking the United States.

“Among our infrastructure developments, he has perhaps – if not the most supportive of our bid to strengthen our public transportation,” Zubiri noted.

“Mr. Abe saw that for the Philippines to achieve genuine progress, for an empowered and mobile citizenry, we would have to have a world-class public transportation system,” he likewise said.

With this in mind, Zubiri said Japan later committed to being the country’s partner in pursuing the Metro Manila Subway Project.

“We, Filipinos, will always remember this project as Prime Minister Abe’s legacy to our country and to our people. We will honor Mr. Abe through the successful completion of the projects that he supported,” he added.

Aside from this, Japan – under Abe’s reign as prime minister – also offered to be a partner in the peace-building efforts in the Philippines, particularly in Mindanao.

In 2017, the East Asian nation granted the Philippines high-speed boats, surveillance radars, and other equipment to augment Manila’s defense system.

And amid the COVID-19 pandemic, Japan supported the crisis response of the Philippines through a loan package amounting to P23.5 billion.

Abe is also known for supporting the Duterte administration’s controversial war against drugs.

READ: PH finds an ally in Japan on war against drugs

Beyond the strengthened relations between both nations, Senator Pia Cayetano likewise noted that Abe helped shed light on the role of women in the economy by introducing the policy on “womenomics.”

Womenomics, according to Cayetano, was about getting women into the workforce with the “intention to cultivate the power of women as the greatest potential for the growth of the Japanese economy.”

READ: Only women should raise children? Japanese execs under fire for remarks on women

She then pointed out that “there is a lot of room for improvement in the Philippines in encouraging the private sector to promote more women, and provide data on the advancement of women.”