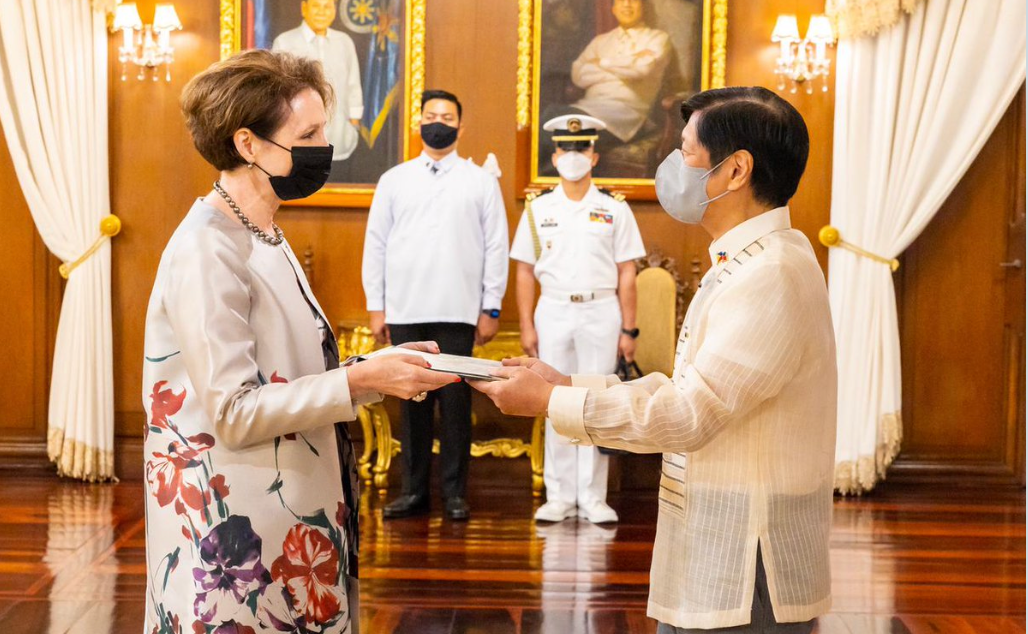 Carlson, who presented her credentials to Marcos, expressed goals to strengthen further the relationship between the Philippines and the United States.

“I am deeply honored to work with the Philippine government led by President Marcos and our #FriendsPartnersAlliesacross this great country to further strengthen U.S.-Philippine ties,” Carlson said in a tweet.

I am deeply honored to work with the Philippine government led by President Marcos and our #FriendsPartnersAllies across this great country to further strengthen U.S.-Philippine ties. pic.twitter.com/KPBo9lyHD1

The meeting between Marcos and Carlson lasted for 45 minutes, according to Philippine Ambassador to the United States Jose Manuel Romualdez, who was also present.

Romualdez said during the meeting, Marcos expressed his appreciation to the United States for helping the Philippines with vaccines in its fight against the COVID-19 pandemic.

“The President expressed his appreciation to the United States in helping the Philippines with the vaccines and that our long historical ties will take us to the future of our strong relationship,” Romualdez said in a text message.

“PBBM (President Bongbong Marcos) said we should have more trade not aid from the US,” he added.

“Ambassador Carlson told the president that the United States is ready to work with his government on all areas of cooperation like climate change, pandemic response and of course food security and the economy,” Romualdez said.

For his part, Romualdez thanked Carlson for her kind words in relation to him being selected to continue as Philippine envoy to the US.

“With the Philippines, our oldest treaty ally in Asia, we have a long history of shared sacrifice and incredibly close people-to-people ties,” Carlson said.

“I look forward to working with the new government and our partners to upgrade and modernize our alliance to face new challenges, expand bilateral trade and investment, and promote democratic freedoms and good governance,” she added.

Prior to arriving in Manila, Carlson was Deputy Chief of Mission and Chargé d’Affaires at the US Embassy in Buenos Aires in Argentina.