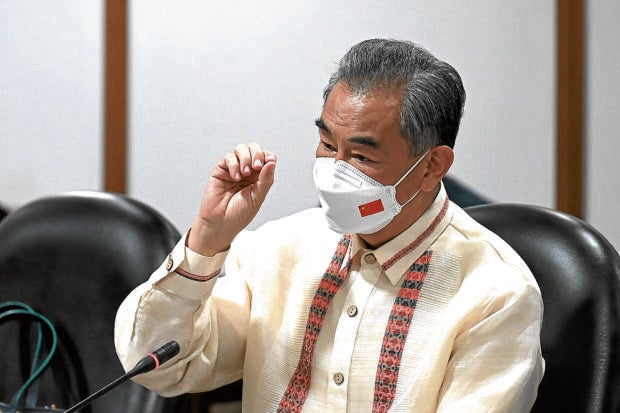 MANILA, Philippines — President Ferdinand Marcos Jr. held wide-ranging talks on Wednesday with Chinese Foreign Minister Wang Yi, but there was no word from Malacañang on whether they discussed the simmering maritime dispute between their two countries in the South China Sea.

Wang was the second highest Chinese official Marcos has met in less than a week since taking office. He earlier held a meeting with China’s Vice President Wang Qishan who was his guest at his inauguration on June 30, but officials still have not provided details about their discussions.

“We also discussed agriculture, infrastructure, energy, and our commitment to maintaining the strong relationship between our peoples in the coming years,” he said, without elaborating.

In a call on Manalo earlier in the day, Wang said Beijing was committed to working with the country’s new administration “in all areas of comprehensive, strategic partnership” and expressed confidence that they could start “a new golden era” of bilateral ties.

Wang expressed appreciation for the president’s “friendly policy” toward the Chinese government, saying Marcos’ recent statements “have sent out a very positive signal to the outside world.”

Last month, Marcos called China the Philippines’ “strongest partner” in its fight against the COVID-19 pandemic.

He echoed the same statement in his meeting with the Chinese vice president, telling the visiting official that he considered China “the most powerful partner of the Philippines,” according to China’s state news agency Xinhua.

Xinhua reported that Marcos was willing “to deepen its participation in the joint construction of the Belt and Road, join hands with China in coping with regional challenges, and elevate the bilateral ties to a higher level.”

The Belt and Road Initiative is a massive Chinese infrastructure and investment development project across Asia, Europe, and Africa.

In May, Marcos told reporters that he would talk to China with a “firm voice” and would assert the country’s sovereignty over the West Philippine Sea. He said that with the 2016 international arbitral ruling invalidating Beijing’s sweeping claims to the South China Sea, the Philippines under his administration would not give up even “a single millimeter of our maritime coastal rights.”

On Tuesday, the president said he would seek “to strengthen” ties with China and “to find ways to resolve the conflicts that we have.”

He said Manila’s relationship with Beijing should not only be about the long-standing maritime dispute in the West Philippine Sea.

“Let’s add to that. Let’s have cultural exchanges, educational exchanges, even military if that will be useful,” he told reporters in his first press conference after taking office.

He said he also wanted more joint ventures between the Philippines and China, including the private sector.

In his meeting with Manalo, Wang stressed that the relationship between Manila and Beijing had “turned a new page” with the election of Marcos as the new president.

Given the “uncertain, unstable and complex regional and international dynamics,” Wang said it was even more important for China and the Philippines “as two close neighbors to join hands and further enhance mutual trust, expand mutually beneficial cooperation.”

“This will not only serve the common interest of the two countries and two people but will also be our important contribution to peace and stability of our region,” he added.

“We are ready to work toward that same direction with the Philippines and to plan for our cooperation going forward in all areas of our comprehensive strategic partnership and I am confident that with our two sides working together, we can surely open up a new golden era for the bilateral relationship,” China’s top envoy said.

Manalo said he looked forward to having fruitful exchanges on important matters between the Philippines and China.

“There is no doubt that the security situation surrounding our countries and our region has become more complex, as political, economic, and socio-cultural landscapes continually shift. We also find ourselves rebuilding after the pandemic, which has ravaged our economies and as well as our efforts to reach development goals, such as the 2030 Sustainable Development Goals,” Manalo added.

The Philippines and China formalized ties on June 9, 1975, during the dictatorship of the president’s late father.

The pact establishing diplomatic relations between the two countries was signed during a five-day state visit to China by Marcos Sr., who was accompanied by his wife Imelda, and daughters Imee and Irene. They met Chinese leader Mao Zedong in Beijing.

Marcos Sr. won a political victory when he got a commitment from Beijing not to interfere in the internal affairs of the Philippines, which at the time meant China would cease supporting the local communist insurgents.

The ground for the diplomatic ties was prepared in September 1974 by the former first lady, who led a Philippine delegation to China to promote better links between the two countries. She and her then 17-year-old son, the future president, met Mao for the first time.

Reuters reported that many analysts saw the election of  Marcos as more favorable to China than to the United States.

China’s assertiveness and conduct in waters claimed by the Philippines have long been sources of diplomatic tension.

Marcos has a tricky balancing act in boosting business ties with China while maintaining a close relationship with the US, its treaty ally and former colonial master that still holds considerable sway among the military and the public.

—WITH A REPORT FROM INQUIRER RESEARCH AND REUTERS

Bongbong Marcos: PH-China friendship to continue for benefit of people