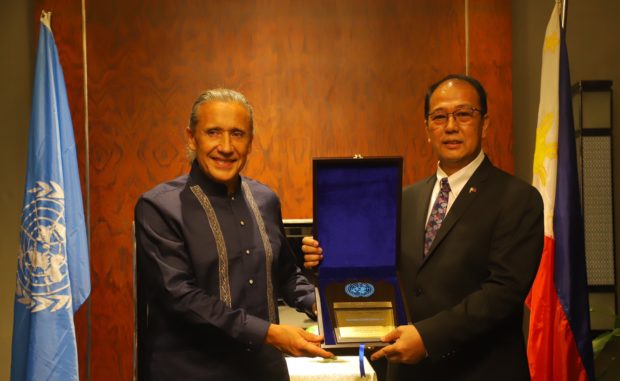 UN Resident Coordinator in the Philippines Gustavo González cited Galvez’s “commitment and professionalism in peacebuilding efforts,” many of which were done in collaboration with the UN Philippines.

According to Gonzales, Galvez “personally contributed to the absence of major conflict since the Marawi Siege in 2017 which has led to [the] increase of economic activity across the Bangsamoro region.”

This, he noted, “is a clear demonstration of the so-called peace dividends.”

Gonzales also cited how Galvez “also contributed to the strengthening of the role of women and the youth in the peace process, conflict transformation and the protection of human rights” that is deemed “crucial for securing sustainable peace.”

The UN Philippines, through the United Nations Development Programme, has supported the government’s various peacebuilding programs.

In a reception organized by the UN last Wednesday, Gonzales presented a plaque of recognition to Galvez.

During the event, Foreign Affairs Secretary Teodoro Locsin lauded Galvez for his role in ending the Marawi siege in 2017 as commander of the military’s Western Mindanao Command, and his role in overseeing the national government’s COVID-19 response.

Galvez thanked the UN and other international development partners for their help in strengthening the peace process.