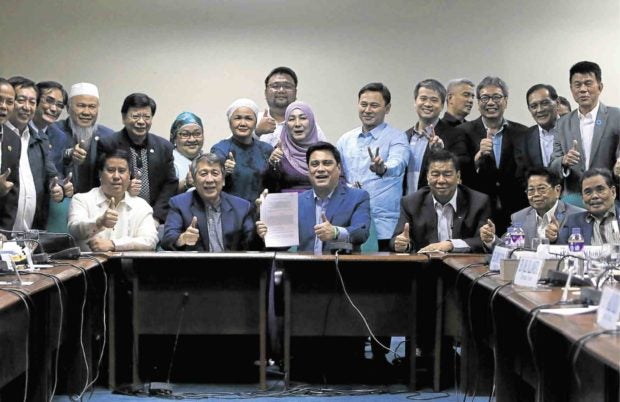 MINDANAO ON THEIR MINDS Members of the bicameral conference committee and the Bangsamoro Transition Committee celebrate the approval of the draft Bangsamoro Organic Law on July 18. —RICHARD A. REYES

UNITED NATIONS — UN Secretary General Antonio Guterres has called a new law in the Philippines creating a Muslim autonomous region “a landmark achievement on the road to lasting peace” in the country’s troubled south.

President Rodrigo Duterte on Thursday signed the legislation establishing the Bangsamoro region, capping off over two decades of negotiations under four presidents.

The new region is aimed at settling nearly half a century of Muslim unrest in the south.

UN spokesperson Stephane Dujarric on Friday said “the United Nations will continue to support the Philippines in the implementation of the law, and to help build the capacity of the Bangsamoro Transition Authority as an effective conduit for peace, democratic governance and human rights.”

He said Guterres congratulated the negotiators, including the government and the Moro Islamic Liberation Front.

In a separate statement, Maja Kocijancic, spokesperson for the European Union, said the passage of the Bangsamoro Organic Law by Congress and the subsequent approval by Mr. Duterte was “an opportunity for the Filipino people to embrace peace and stability after decades of strife.”

“It comes after 21 years of formal talks after the first ceasefire agreement between the government and the Moro Islamic Liberation Front. It underlines both parties’ commitment to peace and their ability to tackle a variety of complex matters through a comprehensive and inclusive law,” Kocijancic said.

She said the European Union remained a “staunch supporter of the Mindanao peace process” and was prepared to support the implementation of the Bangsamoro law for “long-lasting peace, development and prosperity in Mindanao and for the Filipino people.”