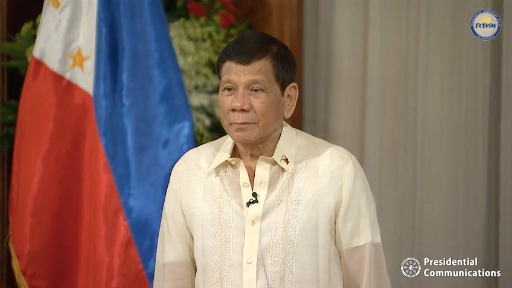 President Rodrigo Duterte accepts the credentials of four envoys at the Malacañan Palace on Wednesday, May 25, 2022. | Screengrab from RTVM Facebook page

The resident Ambassadors-Designate to the Philippines whose credentials were accepted at the Malacañan Palace were Phan Peuv of Cambodia, Agus Widjojo of Indonesia, Ricardo Luis Bocalandro of Argentina, or officially Argentine Republic, and Ioannis Pediotis of Greece, or officially Hellenic Republic.

As he presented his credentials, Peuv noted the good bilateral relations of Cambodia and the Philippines which are set to celebrate their 65 years of diplomatic affairs.

Duterte, in response, said he expects Peuv’s “high level exchanges to continue and chart the future course for growing engagement” between Manila and Phnom Penh.

Duterte also said the Philippines is looking forward to an enhanced cooperation with Cambodia in various areas, including trade.

Meanwhile, Widjojo underscored that Indonesia and Philippines “have long been friends and allies for over seven decades” and that that the two countries’ economic cooperation has been strong.

Duterte, for his part, stressed the country’s robust trade relations with Indonesia despite challenges and expressed anticipation to more bilateral engagement with Jakarta “as we advance our shared interests.”

Bocalandro, on the other hand, conveyed his desire to “strengthen and deepen the friendly relations” between Manila and Buenos Aires as he emphasized that the Philippines and Argentina “share a common Hispanic root.”

Duterte thanked Bocalandro for Argentina’s “good treatment of Filipinos working and residing” there.

The Philippines is looking forward to increasing cooperation, and enhancing cooperation in regional and multilateral fronts with Argentina, added Duterte.

Highlighting the more than 200-year relations of the Philippines and Greece, Pediotis said the two nations have shared “mostly similar” views on international issues, especially regarding the law of the seas.

In accepting his credentials, Duterte pushed to “further deepen bilateral engagement for the mutual benefit of our two peoples.” The President also expressed appreciation to Athens’ support to Filipino seafarers.