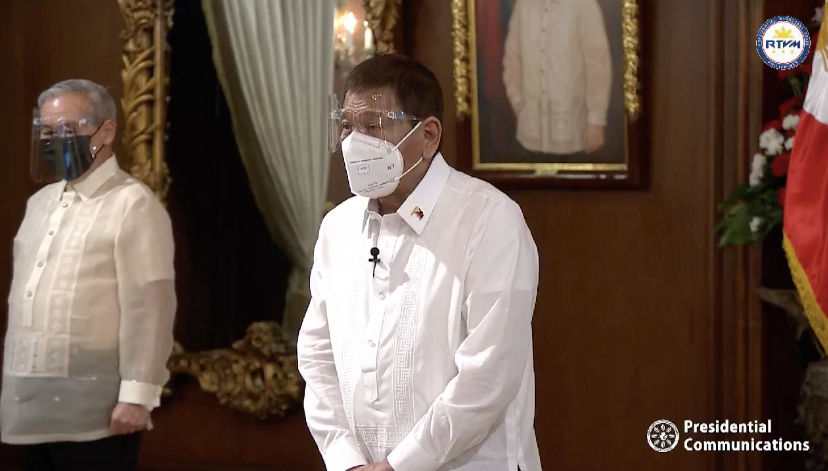 President Rodrigo Duterte delivers a message as he accepts credentials of new ambassadors of the European Union, Brazil, South Korea, France, and Colombia at the Malacañan Palace on Wednesday, February 10, 2021. Beside him is Foreign Affairs Secretary Teodoro Locsin Jr. Screengrab from RTVM

Véron expressed the EU’s willingness to support the Philippines in its efforts to overcome the Covid-19 pandemic, “including guaranteeing affordable and fair access to vaccines for all.”

Duterte, for his part, noted that the Philippines and the EU should continue “to redefine, refine and reinforce” its ties in the face of challenges and opportunities.

Meanwhile, the President thanked the Philippines’ “old friend and partner” Brazil for supporting the country’s defense and security.

Duterte welcomed the delivery of the six Brazilian-made attack aircrafts last year as he received the credentials of its new envoy.

In accepting the credentials of Ordoñez, the President said it was time to bring the Philippines’ ties with Colombia “to another level.”

“We are ready to further enhance cooperation particularly in trade and investment, defense, and in addressing non-traditional security issues including terrorism and violent extremism and drug trafficking,” Duterte said.