“As a doctor, I have a more acute sense of the health needs of my constituents,” said Ofelia Alcantara, the mayor of Tolosa, a municipality with more than 20,000 residents in the central region of the Philippines. “I believe that a healthy community is the driving force towards a stable and productive municipality.”

The vision of Mayor “Ofel” – as she is known – is for Tolosa to become an example of how to govern a municipality. This means she must manage the economic, political, and social landscape and respond to the needs of the community. 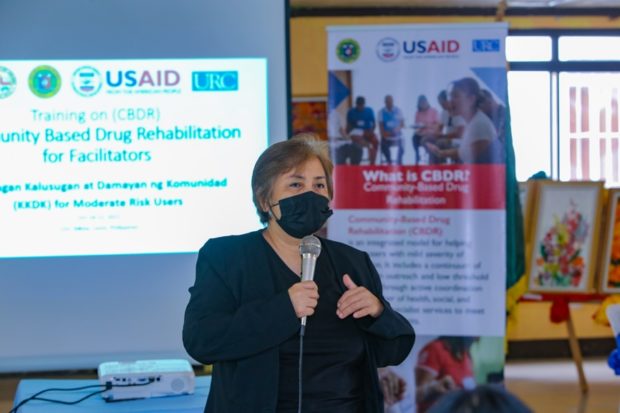 One of Tolosa’s urgent needs is ending the vicious cycle of drug addiction in the community. However, until recently, the remote, low-income municipality didn’t have any programs to help treat people who use drugs (PWUDs). Health workers lacked the capacity to screen and implement community-based drug rehabilitation programs (CBDR) in their communities.

“There are many initiatives that must be done in Tolosa,” said Mayor Ofel. “It is important for local government units like Tolosa to partner with agencies like USAID. This is helping us develop our health program and activities.”

In 2020, Tolosa signed an agreement with USAID after the municipality was identified as one of the partner sites of USAID RenewHealth – a project implemented by URC that helps PWUDs, people in recovery, and their families obtain access to informal care, self-help, or community-based rehabilitation and recovery support to reduce or prevent drug dependence.

In September 2021, USAID helped train 19 of Tolosa’s barangay (neighborhood) health workers (BHWs) on the Screening, Brief Intervention, and Referral to Treatment, an evidence-based practice used to identify, reduce, and prevent problematic use, abuse, and dependence on alcohol and illicit drugs. As a result, the BHWs were able to conduct the municipality’s very first screening of PWUDs.

The following month, 38 BHWs attended Tolosa’s first CBDR facilitator training. The program included measurement tools that identify strengths and areas of improvement for each of the participants, including facilitators and trainers. The training produced a pool of CBDR facilitators who now can treat PWUDs through patient-centered and compassionate CBDR services.

Among these new facilitators is Jo Ann Cacerez, a BHW for the past 10 years. “I find it inspiring that we are able to do this now and provide the needed services to our community members,” Cacerez said.

Of the 173 PWUDs in Tolosa, 125 have been screened and are now attending CBDR sessions in their respective barangays. 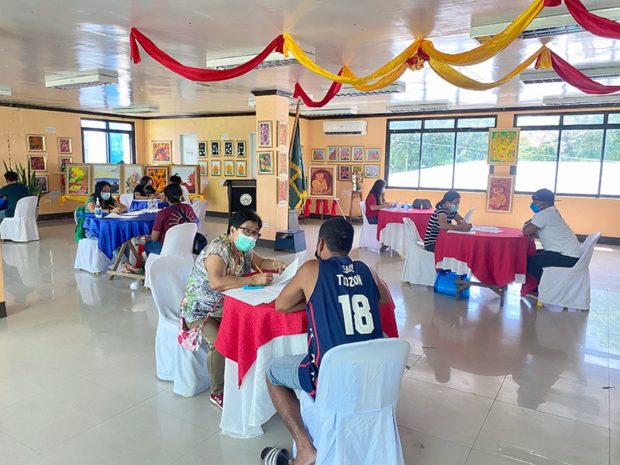 The first screening of people who use drugs in Tolosa in September 2021. Credit: URC

Tolosa is using the General Interventions for Health and Well-being Awareness (GINHAWA) program for low-risk drug users and the Katatagan, Kalusugan at Damayan ng Komunidad (KKDK), or Resilience, Health and Care in the Community program for moderate drug users.

GINHAWA is a secondary prevention intervention program that focuses on improving well-being, quality of life, and life skills to prevent substance use. The KKDK program for moderate-risk users focuses on drug recovery skills and life skills, but also includes families of users – recognizing that drug use is not only an individual problem but is linked to the family.

“Although Tolosa has limited resources, it has a lot of untapped sources of support just waiting to be unearthed,” she said.

“For the past 2.5 years, we have been collaborating with different sectors,” said Mayor Ofel. “We have tapped the academe as an ally in capacity-building. We have reached out to regional and national government agencies for additional logistics, especially during the Covid-19 pandemic. We have opened our doors to development partners like USAID to use Tolosa as a staging ground for their health projects.”

Said Mayor Ofel: “My vision is for CBDR to be fully institutionalized and integrated in the health program of the municipality – that it becomes a regular service of the local government, and that people will actively seek out mental health care without the stigma. We are thankful for USAID’s assistance and we hope to scale up this work up for the province of Leyte.”

Tolosa’s citizens are living healthier lives thanks to collaborations between local government and partners like USAID.