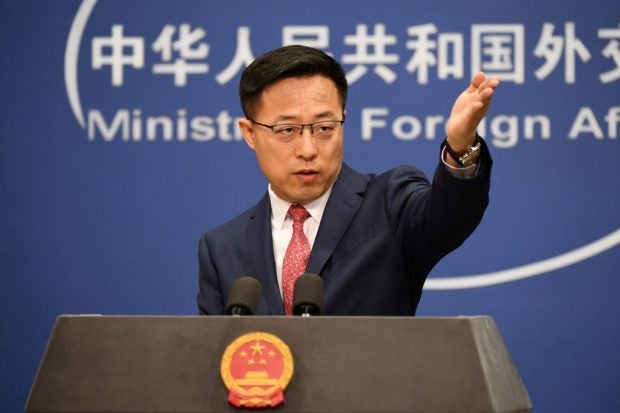 MANILA, Philippines — The Chinese Foreign Ministry has defended the presence of a Chinese vessel in the Philippines’ maritime territory in the Sulu Sea, labeling the illegal intrusion as an “exercise of the right of innocent passage.”

Foreign Ministry Spokesperson Zhao Lijian made the remark after the Philippines summoned Chinese Ambassador Huang Xilian over the People’s Liberation Army-Navy’s (PLAN’s) illegal incursion in the Sulu Sea located in the southwestern area of the Philippines.

“The Chinese naval vessel’s sailing through the Philippine waters was an exercise of the right of innocent passage pursuant to UNCLOS (United Nations Convention on the Law of the Sea),” he said in a press conference on Tuesday.

“The Chinese passage was safe and standard, and consistent with international law and international practice. We hope relevant parties can view it in an objective and rational manner,” he added.

According to the Department of Foreign Affairs, PLAN Electronic Reconnaissance Ship (Dongdiao-class), with bow number 792, sailed into Philippine waters from Jan. 29 to Feb. 1 without informing Philippine authorities.

It said the Chinese military vessel reached the Cuyo Group of Islands in Palawan province and the protected Apo Island in Mindoro.

The Philippine Navy’s BRP Antonio Luna challenged the Chinese vessel, which claimed it was exercising innocent passage. However, the DFA said the vessel lingered in the area for three days despite being repeatedly directed by the Philippine Navy to leave immediately.

“As a country that abides by its international commitments, the Philippines recognizes the right of innocent passage in accordance with Article 52 of the 1982 United Nations Convention on the Law of the Sea,” DFA said.

The Philippines and China had been at odds over their ownership claims in the disputed South China Sea.

In 2016, the international arbitral court in The Hague invalidated China’s sweeping claims and recognized the Philippines’ sovereignty and sovereign rights in the West Philippine Sea.