DFA: 28 Filipinos expected to evacuate from Ukraine this week 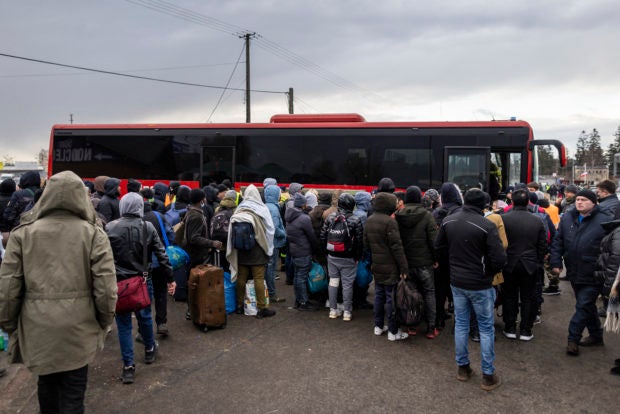 People gather to take a bus as refugees from many different countries. mostly students of Ukrainian universities are seen at the Medyka pedestrian border crossing fleeing the conflict in Ukraine, in eastern Poland on February 27, 2022. (Photo by Wojtek RADWANSKI / AFP)

MANILA, Philippines — Some 28 Filipinos in Ukraine are expected to evacuate from the strife-stricken eastern European country this week amid the aid assault launched by Russia, an official of the Department of Foreign Affairs (DFA) said Monday.

DFA Undersecretary Brigido Dulay said this is on top of the 13 Filipinos who have so far been evacuated from Ukraine to Poland. Of the 28 more expected to be moved, 10 will be coming from Lviv.

(The arrival of our countrymen are still in small batches. We are expecting 28 Filipinos this week.)

Dulay said the number of Filipinos evacuating is “fluctuating” since there are Filipinos, who initially expressed intentions to evacuate, that have yet to go to the borders.

This is as the surrounding countries have allowed Filipinos to enter their borders even without visas, as appealed by Foreign Affairs Secretary Teodoro Locsin Jr.

(Secretary Locsin has asked foreign ministers to allow Filipinos, even those without visas, to enter their countries and they have allowed it.)

“With that, ‘yung ating mga kababayan ay ready to enter any of the borders surrounding Ukraine,” Dulay added.

(Our countrymen can readily enter any of the borders surrounding Ukraine.)

Read Next
22 Filipinos affected by Russia-Ukraine conflict await repatriation – DFA
EDITORS' PICK
Why Tagle is a leading papal contender
A laptop that maximizes your WiFi so you can maximize your productivity
Powered by style, innovation and passion
PH resumes talks with China on Chinese-funded transport projects
In Borongan, nuns play hoops (not mahjong)
House energy committee chair Arroyo bats for cheap electricity
MOST READ
Why Tagle is a leading papal contender
Arjo Atayde reveals proposal to Maine Mendoza was ‘more than a year’ in the making
My neighbor FVR: From soldier to president
Zubiri on SRA mess: Shameful, disgusting
Don't miss out on the latest news and information.