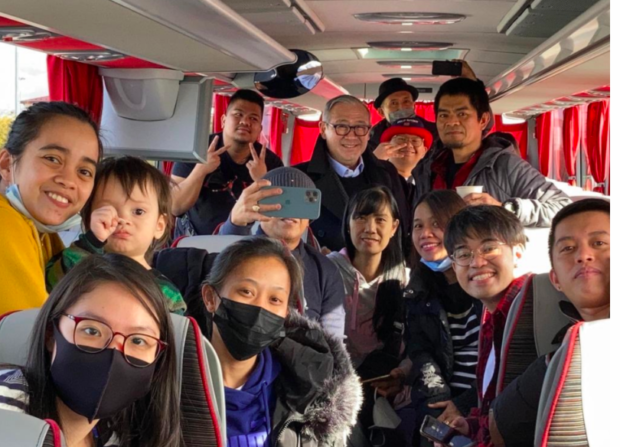 Foreign Affairs Secretary Teodoro Locsin Jr. with the 13 Filipinos who were evacuated from Ukraine. (Screengrab from DFA website)

MANILA, Philippines — Thirteen Filipinos evacuated from Ukraine amid the invasion of Russia have arrived in Poland on Sunday, the Department of Foreign Affairs (DFA) reported.

The displaced Filipinos were provided with food and water.

“We are on high-alert 24/7 to ensure that Filipinos are safe in this conflict. Our Embassies in Poland and Hungary have been working hard these past days to account for each Filipino in Ukraine, and to repatriate them as soon as possible. Our people only need to ask, and we will get them home safe,” said Locsin in a statement.

The DFA urged other Filipinos in Ukraine to take caution and remain vigilant.

It likewise advised Filipinos to contact the Philippine Embassy team in Lviv or the Consulate General in Kyiv should they need assistance.

On Saturday, the DFA said that more than 40 Filipinos are awaiting repatriation amid the Russia-Ukraine crisis.

The DFA earlier assured that all Filipino crewmen aboard a ship hit by bomb off Ukraine are safe.