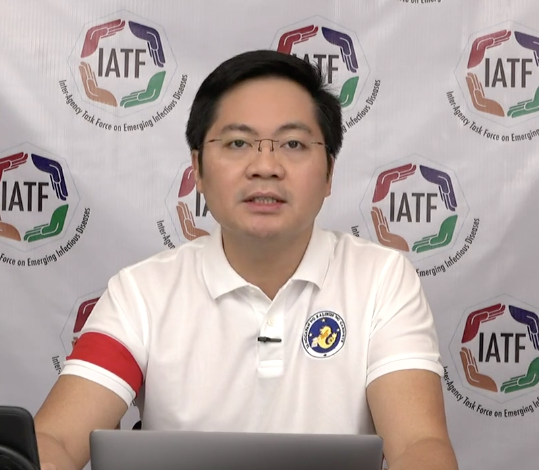 MANILA, Philippines — The Philippines temporarily suspended flights from South Africa, Botswana and five other African countries until Dec. 15 amid the emergence of a new COVID-19 variant that was first detected in South Africa.

Malacañang made the announcement on Friday night, hours after it said the country would be open to fully vaccinated individuals from nonvisa required countries and those coming from “green list” countries.

“The Inter-Agency Task Force (on the Management of Emerging Infectious Diseases, or IATF) approved on Friday the temporary suspension of inbound international flights from South Africa, Botswana and other countries with local cases or with the likelihood of occurrences of the B.1.1.529 variant. This shall take effect immediately and until 15 December 2021,” said acting presidential spokesperson and Cabinet Secretary Karlo Nograles in a statement. The IATF also approved the temporary suspension of inbound international flights from Namibia, Zimbabwe, Lesotho, Eswatini and Mozambique, which are adjacent to South Africa and Botswana.

South Africa, Namibia and Zimbabwe are under the green list of countries considered to be low risk for COVID-19. Citizens of these countries may also stay in the Philippines for 30 days without a visa, according to a list on the Department of Foreign Affairs website.

Botswana, Lesotho, Eswatini and Mozambique, although nonvisa required countries, are under the “yellow list” of countries.

“Passengers coming from or having been to these abovementioned countries within the last 14 days prior to arrival shall be temporarily barred from entering the country,” Nograles said. He said the Bureau of Quarantine and local government units would be tasked to locate travelers from the abovementioned countries who may have arrived within seven days prior to the temporary suspension order.

These travelers are required to undergo full 14-day facility-based quarantine and a reverse transcription-polymerase chain reaction (RT-PCR) test on the seventh day, or or upon location of the passenger, whichever comes later, with the date of arrival considered as Day 1.

Nograles said passengers already in transit from the covered countries and those who had been to these countries within 14 days immediately preceding arrival in the Philippines and who would arrive before 12:01 a.m. of Nov. 28 would still be allowed entry. However, they will be required to undergo stricter quarantine and testing protocols, such as an absolute facility-based 14-day quarantine period, notwithstanding a negative RT-PCR result.

All passengers, whether Filipinos or foreigners, who are merely transiting through the said countries will not be considered as coming from the said countries if they will stay in the airport and were not cleared for entry by immigration authorities in the transit airports.

Prior to the announcement of the suspension, independent pandemic monitor Octa Research fellow Dr. Guido David had called on the government to further intensify the country’s border restrictions on concerns about the newly detected COVID-19 variant. The variant, called B.1.1.529, has been detected in South Africa in small numbers but has shown “a large number of mutations,” according to South African scientists.

“At this stage, all we can say is this could definitely be a potential serious concern … This virus is radically different from the original. We will monitor this in terms of infectiousness and vaccine escape,” David said.

“The worst possibility is that it is infectious, vaccine resistant and more lethal … It would then have the killer trifecta,” he added.

Nograles earlier said the government was in touch with the World Health Organization (WHO) for its advisory on whether the South African variant would be declared a variant of interest or of concern.

Without border restrictions, David expressed concern that the new variant might easily find its way to the country.

Scientists in South Africa blamed the new variant for the surge in infection numbers in that country. Daily cases have increased tenfold since the start of the month.

Britain banned all travel from South Africa and five other southern African nations as concerns grow about the new variant, which scientists said could be more infectious than Delta and more resistant to current vaccines.

Reports indicated that the variant has also been detected in Botswana and Hong Kong among travelers from South Africa.

South African Health Minister Joe Phaahla said the variant was of “serious concern” and behind an “exponential” increase in reported cases, making it “a major threat.”

Scientists said the new variant had at least 10 mutations, compared to two for Delta and three for Beta.

“The concern is that when you have so many mutations, it can have an impact on how the virus behaves,” Maria Van Kerkhove, the WHO’s technical lead on Covid-19, said at a virtual press briefing.

“It will take a few weeks for us to understand what impact this variant has on any potential vaccines,” she added.