No peace if the strong continues to trample on the weak, Duterte tells leaders' summit | Global News
Close
menu
search

No peace if the strong continues to trample on the weak, Duterte tells leaders’ summit 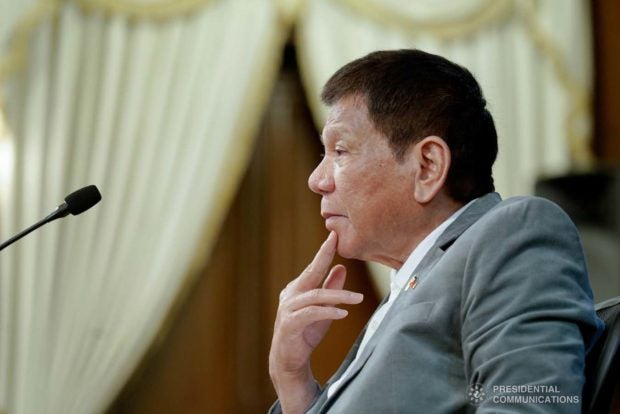 MANILA, Philippines — Real peace cannot be achieved if the strong continues to trample the weak, President Rodrigo Duterte told other heads of state during the Asia-Europe Meeting (ASEM) Summit with a reminder that any territorial dispute must be settled by lawful means.

During a speech before world leaders on Friday, Duterte said that progress could only be attained if peace and stability is achieved through the implementation of the United Nations Convention on the Law of the Sea (Unclos) in resolving the issues of the overlapping claims on the South China Sea.

“Excellencies, we all want progress and prosperity for our peoples. And we know that peace and stability are the preconditions for these to happen. There can be no real peace if the strong trample on the weak – just because it can,” Duterte told the other state leaders.

“There can never be other acceptable basis for a just maritime order but the law, particularly the 1982 United Nations Convention on the Law of the Sea.  All countries – big and small – must adhere to the rule of law faithfully and consistently. Otherwise, there will be chaos,” he added.

Duterte also reaffirmed the country’s position towards a peaceful resolution of the territorial disputes despite China’s continued aggression in the region.

“Ours is a region full of promise but fraught with potential flashpoints. These include disputes in one of the world’s most important sea lanes of communication.  The Philippine position is clear and unchanging – disputes must be settled peacefully in accordance with international law,” he explained.

“The South China Sea must remain a sea of peace, stability and prosperity, where the vital interests of stakeholders inside and outside the region are recognized and respected,” he further said.

Despite this, Duterte thanked the country for reaffirming its commitment to discussions on a Code of Conduct on the West Philippine Sea.

“We acknowledge China’s reaffirmation of commitment to an early conclusion of negotiations on a substantive and effective Code of Conduct on the South China Sea,” he said.

“We thank our ASEM partners that have issued statements of support on upholding the rule of law in the South China Sea. We also welcome their interest to enhance cooperation, including in maritime security.  We are encouraged by these developments,” he added.

Duterte’s statements came a week after Chinese Coast Guard vessels blocked and water cannoned Filipino boats that were on a mission to resupply BRP Sierra Madre, a ship strategically grounded at the Ayungin shoal, which is being claimed by China as part of its territory.

BRP Sierra Madre serves as an outpost of the Philippine Navy in the shoal to mark the territory as part of the country’s EEZ.

While the incident did not result in any injuries, it initially forced the boats to abort their mission.

Duterte denounced the incident, saying in another leaders’ forum that the Ayungin incident does not speak well of the relations between China and the Philippines, which have enjoyed good ties under his administration.

According to Duterte, parties with stake in the West Philippine Sea must ensure that the disputed region is a “sea of peace and stability”.

Despite his strongly worded statement, some groups blamed the President for China’s repeated intrusions in the disputed area, citing another instance in March 2021 when over 220 Chinese ships were spotted in line formation near the Julian Felipe Reef.

According to critics of the administration, it was Duterte who started the pivot to China, under his administration’s independent foreign policy. The President chose to mend ties with the Asian superpower, after relations were strained due to the complaints filed by the previous administration.