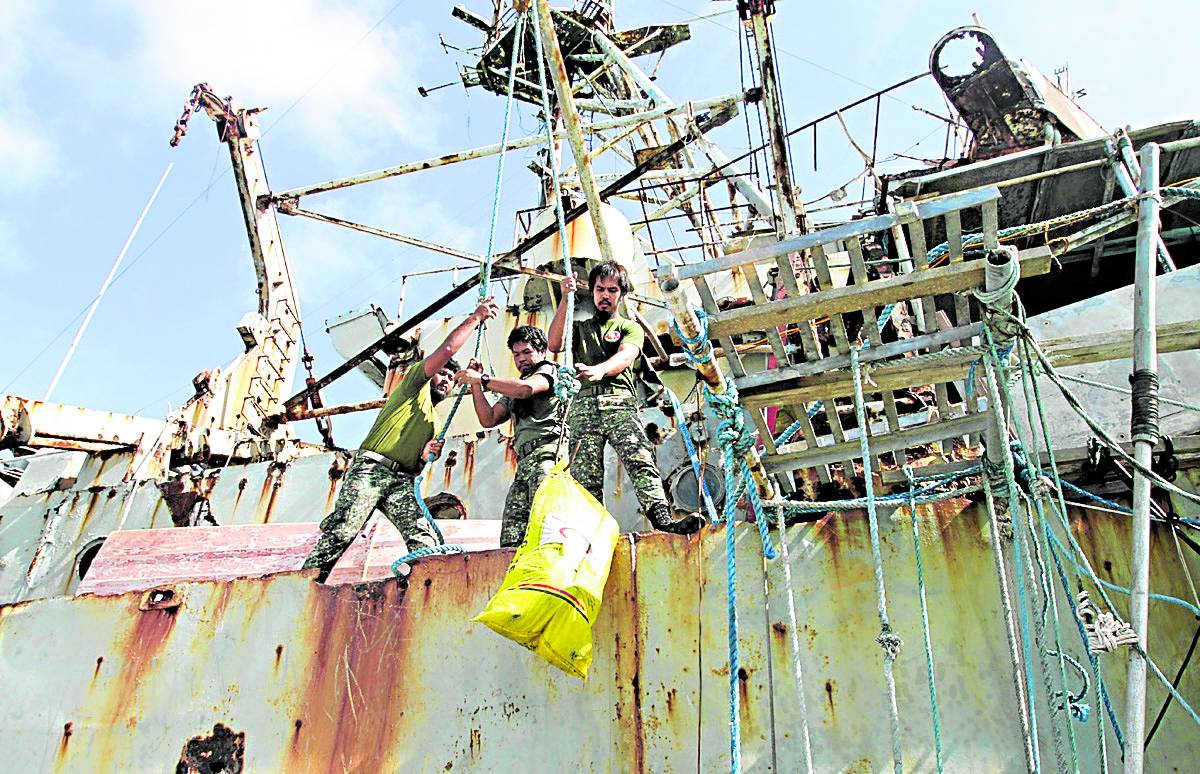 MANILA, Philippines — The BRP Sierra Madre, a former World War II-era ship that is now a rusting military outpost on a shallow reef west of Palawan province, has become the symbol of Philippine sovereignty over the West Philippine Sea.

Since it ran aground in 1999 at Ayungin (Second Thomas) Shoal, which is about 196 kilometers from Palawan and well within the Philippines’ exclusive economic zone (EEZ), China has repeatedly demanded its removal, claiming that the area was part of its territory.

Following the Nov. 16 incident in which three Chinese coast guard ships prevented the resupply of a military detachment on the Sierra Madre with a water cannon attack on two Filipino civilian boats carrying food for the Marines, the Philippine government said it had no plans to abandon the shoal and was determined to keep the detachment there.

In a statement on Friday during the Asia-Europe Meeting, President Rodrigo Duterte thanked countries that expressed support for the Philippines over the incident.

He stressed that the South China Sea must remain “a sea of peace, stability and prosperity.”

“There can be no real peace if the strong trample on the weak—just because it can,” he said.

Sen. Panfilo “Ping” Lacson, head of the Senate national defense and security committee, filed a resolution on Friday calling on all senators to condemn the “continued presence and hostile acts” of Chinese vessels within the country’s EEZ and “thwart” further Chinese bullying in Philippine waters.

The resolution also urged the government to “fortify, amplify and enhance our positions in the West Philippine Sea through defense and security agreements with other nations.” Lacson had proposed refurbishing the ship and deploying another one to the shoal.

In a response, Cabinet Secretary Karlo Nograles, the acting presidential spokesperson, on Friday said the government was continuously modernizing the Armed Forces of the Philippines and that “in conducting our AFP modernization, this includes our naval assets.”

A Chinese foreign ministry spokesperson this week said the Philippines made a “commitment” to remove the Sierra Madre. But Defense Secretary Delfin Lorenzana denied that Manila made such a commitment.

On March 14, 2014, when China also demanded the pullout of the Sierra Madre, the Department of Foreign Affairs (DFA) told Beijing that the Ayungin Shoal was part of the country’s continental shelf over which it had sovereign rights and jurisdiction.

It said the Philippines never made an “unequivocal commitment” to pull out of the shoal, as China had claimed a day earlier.

“The BRP Sierra Madre, a commissioned Philippine Naval vessel, was placed in Ayungin Shoal in 1999 to serve as a permanent Philippine government installation in response to China’s illegal occupation of Mischief Reef in 1995,” the DFA said.

The statement was issued five days after Chinese ships for the first time in 15 years intervened in the delivery of supplies to Filipino troops stationed on the decrepit ship. Later on March 29, 2014, in another attempt, a supply boat was able to slip past the Chinese ships to deliver food and replacement troops to the Sierra Madre after a dramatic two-hour standoff.

Ayungin Shoal is a strategic gateway to Reed Bank, believed to be rich in oil and natural gas. Beijing says the shoal is part of the Spratlys, a group of 250 islets spread over 427,350 square kilometers in the South China Sea and claimed entirely by China, Taiwan and Vietnam and in part by Malaysia, Brunei and the Philippines.

Commissioned by the United States in 1944 as the USS Harnet County, the landing ship tank was first used during World War II. It participated in the assault on Okinawa Gunto, Japan, in 1945. It was decommissioned by the US Navy in 1946.

The vessel was recommissioned in August 1966 for the Vietnam War. It was decommissioned again in October 1970 in Guam.

In April 1976, the Philippine government acquired it under Washington’s Foreign Military Sales program. The vessel was renamed BRP Sierra Madre, also known as LT 57, and joined the Philippine Navy in 1979.

The ship, which was supposedly on its way to Panatag (Scarborough) Shoal, struck a shallow reef at Ayungin Shoal on May 9, 1999. Six days after running aground, Navy officials accused two Chinese frigates of training their guns on the distressed ship.

The Sierra Madre sounded its alarm, and the Chinese frigates headed toward Panganiban (Mischief) Reef where the Chinese had fortified buildings they claimed they built as shelters for fishermen four years earlier.

Panganiban is now one of the largest artificial islands built by the Chinese who use it as an air and naval outpost in the South China Sea.

On Nov. 2 ,1999, the Inquirer reported that Manila had turned down Beijing’s request to tow the Sierra Madre out of the shoal.

“We told them that the Philippines is also claiming the territory and that repairs on the ship have yet to be finished,’’ a senior DFA official was quoted as saying.

Then Defense Secretary Orlando Mercado said that lack of parts for the vintage ship was delaying repairs. “But in due time, we will be able to restore the ship,” he said.

On Nov. 3, 1999, another naval vessel, the BRP Benguet, ran aground at Panatag Shoal but Mercado, seeking to allay fears it could add further tension, said that the ship’s primary mission was to transport Navy personnel and cargo and that it was responding to a distress call by a local fishing boat when it got stranded.

China had complained over its grounding and urged Philippine authorities to remove it before the visit of Chinese Premier Zhu Rongji to Manila to attend a summit of leaders of the Association of Southeast Asian Nations hosted by the Philippines.

Then military chief Gen. Angelo Reyes reported that the Benguet was extricated on Nov. 29. —WITH REPORTS FROM DJ YAP, JULIE M. AURELIO AND INQUIRER RESEARCH