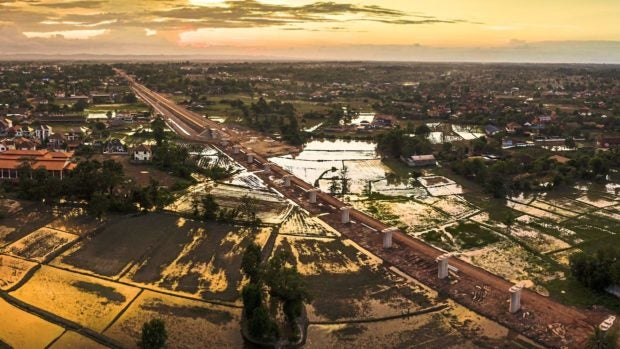 Aerial photo taken on May 29, 2020 shows a view of the under-construction China-Laos Railway running through the outskirts of the Lao capital Vientiane. — Xinhua via The Star/Asia News Network

KUALA LUMPUR — On December 3, the 414 km Boten-Vientiane railway (more commonly referred to as the China-Laos railway) will open for cargo service, marking an important milestone in the Pan-Asian Rail network, which is part of the grander Trans-Asian Rail network envisioned in the 1950s.

The realization of this Kunming-Vientiane stretch indicates that the proposal to link Kunming with Singapore using rail – via Vientiane, Bangkok and Kuala Lumpur – remains very much alive. Touted as landlocked Laos’ most expensive project, the Boten-Vientiane stretch, which is part of China’s Belt and Road Initiative push, will be connected to China’s Yuxi-Mohan stretch (504km), which is also slated to open on Dec. 3 to allow for cross border services between the two countries.

A 9.7 km cross-border stretch will provide that final joining between Boten and Mohan, forming the China-Laos network designed mostly for medium speed travel, of up to 160kph, for passenger services. By next year, attention will shift to the Bangkok-Nong Khai high-speed railway or what is also known as Thailand’s north-eastern high-speed rail (HSR) line, a 608km stretch that is currently under construction as efforts to modernise Thailand’s rail network, and a critical stretch that makes the Kun-ming-Singapore stretch closer to reality.

It is the first high-speed line in Thailand, and this stretch is expected to be operational by 2030 at the latest as the country battles hard to overcome several challenges along the way. Under Phase 1, the 252km stretch from Bangkok to Nakhon Ratchasima will be completed in a few years from now (no exact timeline given).

Over the long term, Thailand intends to expand its HSR coverage all the way to Padang Besar, Perlis, the northernmost point of Malaysia’s rail network (excluding the inactive stretch from Kelantan’s Pasir Mas to Hatyai (via Thailand’s Sungai Kolok town).

The Pan-Asia stretch is part of the grander Trans-Asian Railway (TAR) promoted by the United Nations’ Escap (Economic and Social Commission for Asia and the Pacific) to facilitate the movement of goods across the entire Asian-Europe region. Currently, the TAR network comprises slightly over 118,000km of rail routes that have been selected for their potential to serve international trade within the Escap region as well as between Asia and Europe.

Thailand makes no secret of its ambition to be the HSR hub of the Asean Economic Community, with announcement of having five HSR lines sprouting from Bangkok in all directions, including one southwards to the Malaysian border.

On its website, the Thailand Board of Investment says to ensure it maximises its strategic location at the heart of the Asean Economic Community (AEC), Thailand will invest around 1.9 trillion baht under its Thai Transport Infrastructure Development Plan 2015-2022 and Urgent Transport Action Plan 2015.

Key infrastructure projects include intercity rail network development, along with public transportation network development to address road traffic problems in Bangkok and its suburbs, even though it will increase its highway capacity to connect the country’s key production bases with those of neighbouring countries.

“Thailand has an excellent rail system spanning 4,952km of railways that constitute a vital link in the transportation chain.

“The office of the Royal State Railways of Siam was first established under the control of the Public Works Ministry in October 1890,” says the Thai Board of Investment as it tries to drum up investor confidence in Thailand’s transport infrastructure.

Over in Cambodia, construction is ongoing to improve the country’s connectivity with Laos, Thailand and Vietnam so that it will not be left out in the larger scheme of things.

Likewise, Vietnam is also modernising its network, but adopting the use of standard gauge (track width), which is 1,435mm, in its newer stretches, even as existing intercity trains trundle at a relatively slow pace along its century-old metre-gauge network (like Malaysia’s) built during the 1880s by French colonialists.

If things go as planned, Indonesia will earn bragging rights pretty soon too, as the country gets ready to welcome its maiden HSR service from Jakarta to Bandung, a stretch measuring 142km.

Over in Indonesia, the Jakarta-Bandung HSR is on track to open for service in 2023, bridging the congested road corridor between these two megacities, with the latter being the capital of West Java. Bandung itself is the fourth-largest city in Indonesia, with Greater Bandung being the country’s second-largest metropolitan area.

By most standards, the Jakarta-Bandung HSR is rather unusual as it only covers a distance of 142km, a departure from the typical “sweet spot” of HSR, which is around 300km to 900km. However, careful analysis of the current traffic flow between these two cities found that the project is justified, as it can take up to five hours to drive the distance (and on a really bad day, nearly 10 hours), demonstrating the huge amount of time wasted by people on the road. The HSR, when running non-stop between the two cities, covers the distance in a mere 40 minutes by using rolling stock capable of hitting 250kph.

While a conventional train exists between Jakarta and Bandung, it still takes three hours to cover the distance, thus limiting its attractiveness as it struggles with both congestion on board as well as jostling for space with cargo trains. Potential for further development of the HSR network in Indonesia comes from the possibility of extending the line from Bandung onwards to Surabaya.

Indonesian transport authorities, along with the Japanese Inter-national Cooperation Agency, also conducted studies for a project that extends the HSR line all the way to Surabaya after Bandung, covering around 730km in total. Indonesia started considering HSR seriously in 2008, but groundbreaking on the Jakarta-Bandung HSR only took place in early 2016.

The republic is also cognisant that things have to move faster when it comes to its overwhelmed public transport infrastructure.

In March 2017, Indonesia appointed Japan as the partner to refurbishing its conventional railway connecting Jakarta and Surabaya, which runs on a 1,067mm gauge (considered narrow gauge by modern standards).

The project aims to upgrade the tracks to standard gauge so that intercity trains can move closer to 160kph, and this is done by replacing nearly 1,000 level crossings between Jakarta and Surabaya with viaducts.

What then, for Malaysia?

While Malaysia currently has a metre-gauge double track running all the way from Padang Besar, Perlis, to Gemas, Negri Sembilan, operated by KTM Bhd (KTMB), the country needs to urgently upgrade its rail network to ensure that it will be able to tap into the potential of moving cargo by rail, the only part of KTMB’s operation that is profitable.

Currently, KTMB’s cargo train operations have to give priority to passenger traffic, thus imposing serious constraints on its capacity to grow its cargo business.

The impending opening of Gemas-Johor Baru double tracking by the end of 2022 may offer some relief for the southern sector, but not by much for those who need to reach Johor Baru or Singapore in a hurry. The time savings of the Kuala Lumpur to Singapore HSR has already been well laid out: No commercial airline would be able to match the 90 minute non-stop service between Bandar Malaysia in KL and Jurong East in Singapore when the time needed to get to and from airports is considered in the equation.

Restarting the HSR had been the clarion call of former prime minister Datuk Seri Najib Razak, who has argued throughout this month that the country badly needs the project in order not to be left behind.

The HSR was also turned into an electoral issue for yesterday’s Melaka state election, with then caretaker Chief Minister, Datuk Seri Sulaiman Md Ali pronouncing before voting day that the KL-Singapore HSR should be revived as it will bring huge benefits to Melaka.

In fact, Sulaiman proclaimed on Nov 12 that if Barisan Nasional is given the mandate to govern Melaka, it will prevent the project from being built in the state if it is not eventually connected to Singapore (ie, if it ended only at Johor Baru). He said the original route from KL to Singapore was not only important in reducing road traffic congestion but also critical in bringing business and investments to Melaka.

For Dr Carmelo Ferlito, CEO of the Center for Market Education in Malaysia, a boutique think thank based in KL, Malaysia just needs to embrace a wider perspective when planning its rail infrastructure, such as viewing the issue beyond just the KL-Singapore HSR corridor.

“I believe it is in Malaysia’s interest to keep it alive while rethinking its scope and how to finance it. In fact, this moment of difficulty could present the chance to imagine the future of the transportation system in Malaysia not only for passengers but for cargo too.

“For reasons of both economic and environmental sustainability, Malaysia needs to rethink its entire North-South connection and move people and goods traffic from roads to trains.

“Malaysia could implement a successful North-South HSR for both passengers and cargo [with all the due differences], while creating opportunities for economic development and, at the same time, reducing the environmental impact created by vehicular traffic,” he said.