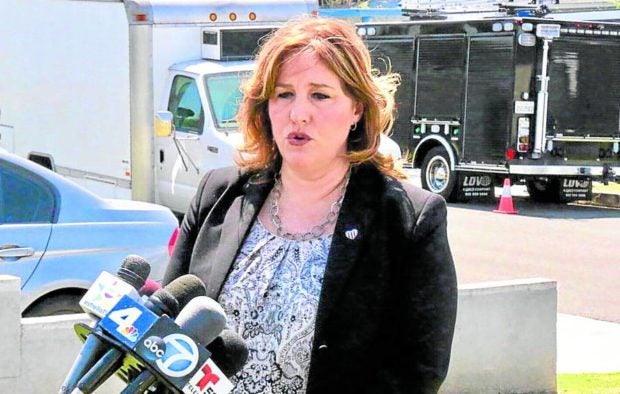 LOS ANGELES — US authorities will seek to confiscate the US assets of Filipino self-styled pastor Apollo Quiboloy which the Federal Bureau of Investigation (FBI) said were “ill-gotten.”

“We seek to recover typically all ill-gotten gains from the crimes committed,” FBI spokesperson for Los Angeles Laura Eimiller told the Inquirer on Friday (Saturday morning in Manila).

This disclosure came a day after federal authorities here indicted Quiboloy, who called himself the “appointed son of God,” and eight of his lieutenants for engaging in a “criminal conspiracy” that included sex trafficking, child sex trafficking, money laundering, bulk cash smuggling, marriage and visa fraud, and other violations of federal law.

Eimiller also said more sex trafficking victims may come out to help federal authorities in their case against the 71-year-old Quiboloy and his cohorts in the megachurch Kingdom of Jesus Christ (KOJC), The Name Above Every Name, which he founded in 1985.

The church claims a following of over 6 million in 200 countries.

“We do believe there are additional victims out there,” Eimiller said, in addition to the five unidentified victims (including three minors) mentioned in the 74-page indictment unsealed by a grand jury on Nov. 10.

“We have reached out to multiple cities in the US, and we are hoping these victims will come forward and talk to us,” she said.

Justice Secretary Menardo Guevarra and acting presidential spokesperson Karlo Nograles both said on Friday that the Philippine government would cooperate with the United States if it would seek the extradition of Quiboloy, a close friend and spiritual adviser of President Rodrigo Duterte.

But a lawyer of the pastor in Hawaii, Michael Green, told Hawaii News Now TV that his extradition was “not gonna happen.”

“At this time we are just seeking their arrests,” Eimiller said, referring to Quiboloy and two of his co-accused, Teresita Dandan and Helen Panilag.

Dandan and Panilag, two administrators of KOJC, are believed to be still in the Philippines, like their leader, the US Department of Justice said on Thursday.

If US authorities succeed in the criminal forfeiture, Quiboloy also risks losing some of the prime assets of his religious empire, including a Cessna Citation Sovereign, a private aircraft with a current market value of $18 million, a Bell 429 helicopter, several luxury cars and real estate holdings, such as a million-dollar mansion which he allegedly owns in Calabasas, California, where America’s rich and famous live.

Other properties that could be seized include houses in Las Vegas, Nevada and in Kapolei, Hawaii, as well as the main headquarters of KOJC in the United States with address at 14400 block of Vanowen Street, Van Nuys, California.

Quiboloy has been on the radar of US authorities since Feb. 13, 2018, when he was detained for a day in Honolulu after customs officials found gun parts, at least $335,000 in US dollars and another $9,000 in Australian dollars hidden in luggage in his private aircraft.

But he was not charged in connection with that incident until last Thursday, and at that time was allowed to return to the Philippines in a commercial flight.

Although his Cessna was seized, the plane was returned to him afterward.

Yet his aide Felina Salinas, who is now among the nine indictees, was detained for a month after she was found lying and falsifying a report to US officials.

In the indictment released to the media on Thursday, Quiboloy was finally charged for “knowingly concealing more than $10,000 in currency” in transit to another country outside the United States, a violation under federal law.

“We are confident in our case as we go through the court process,” Eimiller said.