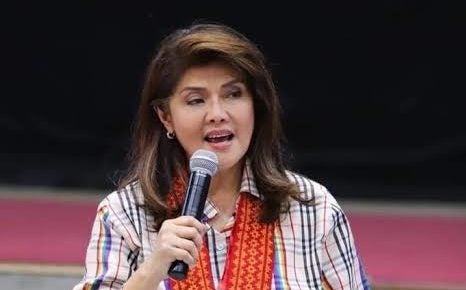 MANILA, Philippines — Senator Imee Marcos expressed misgivings in ratifying the Arms Trade Treaty (ATT) as she raised concerns over a possible embargo or blacklisting of the Philippines due to human rights issues, a fear that officials were quick to allay.

On Thursday, the Senate Foreign Relations Committee concluded its discussions on the ATT, which regulates international trade in conventional arms by establishing the “highest international standards.”

It also seeks to “prevent and eradicate illicit trade and diversion of conventional arms.”

Article 6 of the treaty “unequivocally” prohibits state parties to authorize any arms sales “if it has knowledge at the time of authorization that the items would be used in the commission of genocide, crimes against humanity, or certain war crimes.”

But Marcos feared that this could risk sanctions for the Philippines due to allegations of human rights violations in the country.

“Are we not merely inviting a potential embargo and blacklisting of the Philippines if we become a state party?” she asked.

“With allegations of human rights violations, extrajudicial killings, the drug war, the exporting party may easily be prohibited from shipping vitally needed weaponry to our government on the suspicion that the country is involved in crimes against humanity,” she added.

“Member states would not approve exports of conventional weapons even if it is legitimately for the use of our government,” the senator further said.

She cited the reported cancellation of awarded contracts for the Philippine National Police’s (PNP) purchase of firearms because the United States “refused to issue the export permits.”

Marcos did not specify which incident she was referring to but it can be recalled that in 2017, the US State Department put on hold the delivery of 27,000 rifles to the PNP due to alleged human rights violations linked to the drug war.

Ambassador Bruce Concepcion, Special Envoy for Transnational Crimes, pointed out to senators that the Philippines is “not excused from sanctions” since it is a member of the United Nations.

“But what happens, with the good reputation, the imposition of embargoes and sanctions will be farther because we have a better reputation than before,” he said.

Meanwhile, Director Norman Daanoy of the Department of National Defense (DND) Legal and Legislative Affairs clarified that the ATT does not intend to disarm its state parties.

Nevertheless, he recognized that there are instances when an arms purchase may need to be assessed first “if there are issues.”

He cited a previous procurement of the DND wherein the country’s human rights record was questioned, leading to a suspension of the purchase.

“We have experienced that, we have a procurement I think in the UK, in Europe. Our human rights records were questioned and the procurement was stopped, suspended in the meantime, but after assessment, and justification, the Department of Trade of I think in Germany, issued a clearance for the delivery of the items in the Philippines,” Daanoy said.

“It’s just a matter of presenting it. Justifying it that it’s a legitimate procurement,” he added.

Aside from the concerns raised by Marcos, at least two stakeholders in the domestic firearms industry opposed the ratification of the treaty.

Association of Firearms and Ammunition Dealers of the Philippines President Hagen Alexander Topacio said the ATT will be “disadvantageous to the country.”

“The firearms industry is already heavily regulated in the Philippines more than in other countries. The ATT will require the PH to apply international standards and definitions of conventional weapons contradictory to Philippine laws which provide stricter standards,” he told senators.

For example, a barrel in the Philippines is already considered a firearm and subject to regulation but in other countries a barrel is just a firearm part,” he added.

Further, Topacio said the ATT could result in “another of bureaucracy” in the country but “will not address the surge of illegal firearms.”

“The treaty will require us to report all our imports and exports and this info will be shared to all member states thereby informing those who wish our country harm of the weapons that we possess and those we are claiming,” he further said.

The Philippines signed the ATT on September 25, 2013, making it the first Southeast Asian country to do so, senators were told.

So far there are 110 state parties to the ATT, 31 signatories and 51 states which have yet to join the treaty.

After the discussions, the Senate committee will now be referring the ATT to the plenary for the chamber’s concurrence.

The 1987 Constitution requires concurrence by at least two-thirds of the 24-member Senate before any international agreement that the Philippines signs becomes binding.

Read Next
PNP and its Chinese counterpart revive talks to set up ‘China desks’ in PH
EDITORS' PICK
Miss Universe Philippines partners with JC
Duterte orders review of conduct of war on drugs
No evidence to warrant filing of homicide case vs Julian Ongpin – police
Smart powers Liga Adarna Season 4: Race to the Top
Who is Julian Ongpin?
Rabiya Mateo admits dating an older man and jokes: ‘Tatay pala ‘yung hinahanap’
MOST READ
LOOK: Angel Locsin inspires with weight loss progress
Gordon: Senate uncovered ‘mother of all corruption’ under Duterte admin
Gordon dares Duterte to prove he pocketed PDAF given to Red Cross
Who is Julian Ongpin?
Don't miss out on the latest news and information.