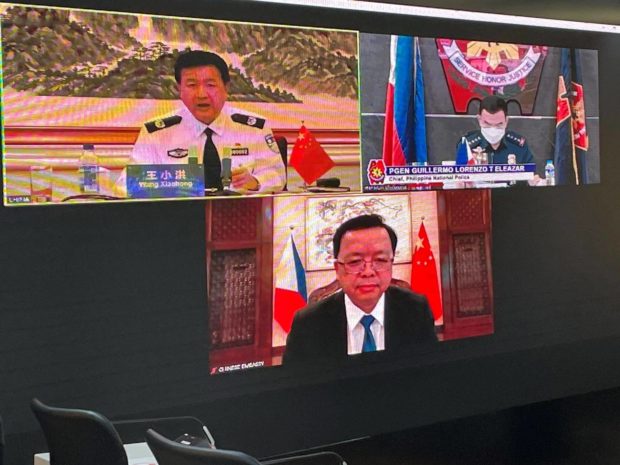 Philippine National Police chief Gen. Guillermo Eleazar discusses with his Chinese counterpart, Wang Xiaohong of China’s Ministry of Public Security, the setting up of China desk in the country. Photo from PNP-PIO

MANILA, Philippines — Top officials of the Philippine National Police (PNP) and its counterparts in the People’s Republic of China (PRC) revived talks of setting up the controversial China desks for the “protection” of Chinese nationals in the country.

The proposal was tackled in the bilateral meeting between the PNP and the Ministry of Public Security (MPS) of the PRC on Thursday.

“[D]iscussed were updates on the proposed establishment of China Desks in the PNP Offices that will address concerns on the protection of overseas Chinese nationals and organizations,” the PNP said in a statement.

First proposed in 2020, the “China desk” was seen as a solution to the rising trend of kidnappings in the country in which the suspects and victims are both Chinese following a surge in Philippine offshore gaming operations.

However, it was later scrapped after the proposal was put under a firestorm of criticism.

Both PNP and MPS maintain liaison offices in Beijing and Manila.