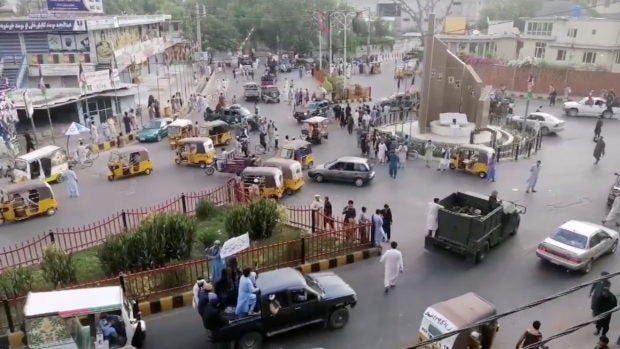 Taliban militants waving a Taliban flag on the back of a pickup truck drive past a crowded street at Pashtunistan Square area in Jalalabad, Afghanistan in this still image taken from social media video uploaded on August 15, 2021. Social media website/via REUTERS

MANILA, Philippines — Filipinos still in Afghanistan have been reminded to coordinate with the Department of Foreign Affairs (DFA) foreign service offices as political turmoil in the country continues.

DFA’s bulletin on Wednesday advised Filipinos, who have yet to express their intent to leave the country, to prepare themselves for repatriation as Alert Level 4 remains in the Middle Eastern country.

Under Alert Level 4, mandatory repatriation for all Filipinos in the area is in place.  According to the latest DFA estimates, there are still 132 Filipinos in Afghanistan.

“The Department continues to exhaust all avenues to assure the safety of the remaining Filipinos in Afghanistan, even as the situation on the ground remains uncertain,” the department said.

“Filipinos in Afghanistan that have not yet registered their intent to be repatriated are requested to do so immediately,” it added.

DFA assured that the Philippine Embassy in Islamabad has been coordinating with other offices in repatriation efforts.

“The Philippine Embassy in Islamabad is working alongside other Philippine Foreign Service Posts in the repatriation efforts, particularly in securing safe passage and other forms of coordination as needed to overcome challenges on the ground such as secure movement within Kabul, access to the airport, and the availability of flights,” it said.

“The government is also coordinating flights back to the Philippines for all those who are able to independently leave Afghanistan via 3rd countries,” it added.

The situation in Kabul and the whole of Afghanistan remains uncertain after the government recently fell into the Taliban’s hands.  Taliban’s assumption of control of the landlocked country comes after almost 20 years since it was overthrown by forces led by the United States.

READ: How did the Taliban take over Afghanistan so quickly?

People were seen in panic as Taliban forces marched into Kabul, with men and women hoarding airports in hopes of getting a flight away from the country.  Despite this, the Taliban has vowed to observe a peaceful transition.

Earlier, DFA also confirmed that 35 individuals have already arrived in the Philippines from Afghanistan.