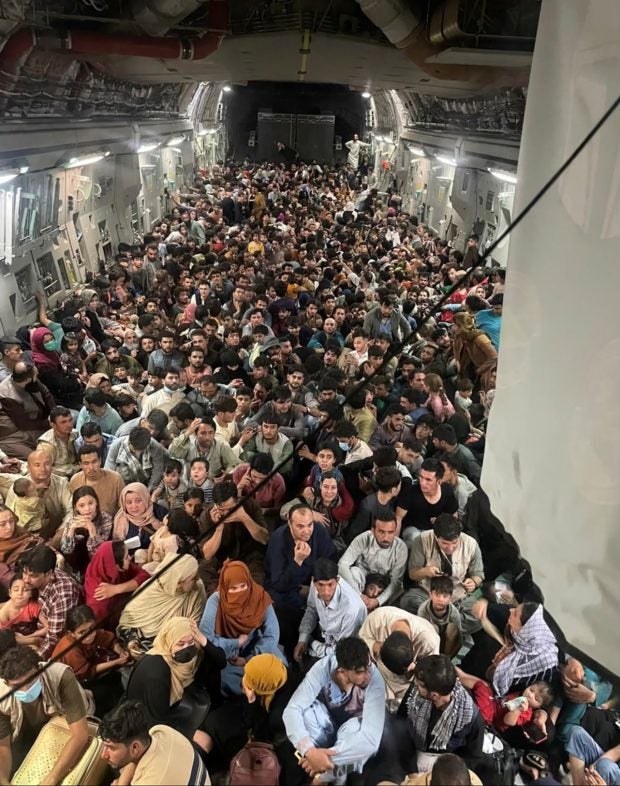 OUT OF KABUL As chaos swept the Afghan capital on Sunday following the Taliban’s advance, some 640 Afghans managed to make it inside a US Air Force transport aircraft that flew them to safety in Doha, Qatar. —REUTERS

MANILA, Philippines — Thirty-five Filipinos who were airlifted out of Afghanistan by the United States government and their employers have arrived in Manila, the Department of Foreign Affairs (DFA) said on Tuesday.

The DFA said there were 132 other Filipinos still in Afghanistan waiting to be repatriated as the Taliban swiftly seized Kabul after US-led foreign military forces withdrew from the country after 20 years.

The 35 Filipinos, not 32 as earlier reported, were flown by their respective companies from Afghanistan to Doha, Qatar, where they boarded the DFA-chartered plane to Manila, it said.

“The DFA is working nonstop to explore all options to ensure the safety and welfare of our people in Afghanistan in the face of challenging conditions,” Eduardo Meñez, assistant secretary for public and cultural diplomacy, told reporters on Tuesday.

The Philippine government had declared alert level 4 in Afghanistan that called for mandatory repatriation of its citizens “due to the uncertain security situation’’ in the Central Asian country.

Filipinos who are still in Kabul were advised to contact the Philippine Embassy in Pakistan for repatriation.

“All those who need care because they are persecuted in their countries, you have a place here in the Philippines,” he said in a press briefing.

Central Asian countries bordering Afghanistan were bracing for the influx of refugees as thousands of Afghan nationals scrambled to escape the Taliban, who are feared for their unbridled extremism.

Roque said the Philippines, through the decades, admitted asylum seekers such as the Russians fleeing the civil war between the White Army and Bolsheviks in the 1920s; German and Austrian Jews fleeing persecution by the Nazis; and the “boat people” who fled South Vietnam after it fell to the communists.

“Since time immemorial, the Philippines has had jurisprudence—even before it adopted the Convention of Refugees—welcoming asylum seekers. As the Supreme Court said [in one of its decisions], the Philippines will not hesitate to admit individuals fleeing their homelands because of fear of persecution,” he said.

The Taliban governed most of Afghanistan from 1996 until 2001, when it was ousted by the United States-led coalition in the aftermath of the Sept. 11, 2001 attacks that were blamed on the al-Qaida terrorist group said to be operating from the Central Asian country.

The war in Afghanistan was part of the global war against terror under the US-led Operation Enduring Freedom.

The Taliban offensive that began last May culminated in the fall of the capital Kabul on Sunday and the collapse of the government of President Ashraf Ghani, who fled the country.