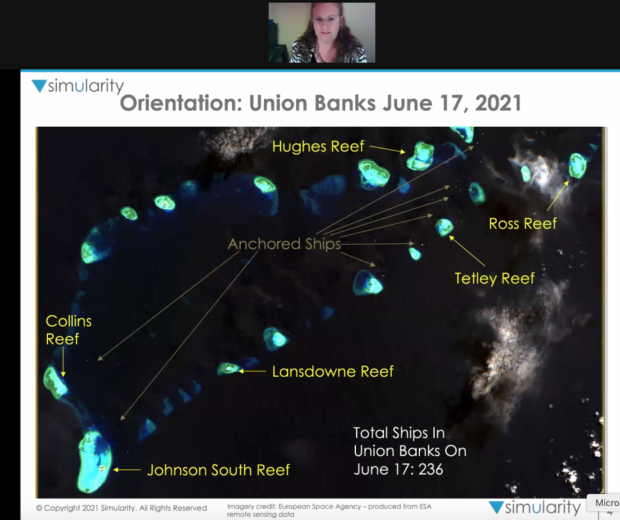 Satellite photo shows the position of the ships dumping human waste in the water in some reefs in the Spratly Islands. (Photo from Simularity)

MANILA, Philippines — The dumping of human waste at the Spratly Islands, which has been going on for the last five years at least, may eventually damage coral reefs in the area, creating a “dead zone” that is unsuitable as a breeding place for fish.

This will cut down the food supply not only of the immediate vicinity of the islands but of all the coastal areas of the South China Sea, according to Liz Derr, co-founder and CEO of Simularity, who talked about the issue in an interview on Tuesday with the ABS-CBN News Channel.

Simularity, which specializes in geospatial AI technology for satellite imagery, runs a free service called the South China Sea Rapid Alert Platform, which monitors the much-disputed body of water and publishes reports of unusual activity there.

“Coral reefs are basically habitats for a vast number of species, and it’s where most fish species go to breed and spawn. And if the reef habitat is damaged, the fish won’t go there to spawn anymore. And if it’s overfished, there aren’t many fish to spawn, to begin with. As the coral dies, it becomes less and less friendly as a breeding ground,” Derr said.

“And one might say: ‘Okay, so there’s no fish on the Spratlys. Is that a big deal?’ But it’s actually way worse than that because the fish that breed on the Spratlys their eggs get traveled all around the South China Sea from the summer and winter monsoons that blow those waters around while the eggs are still larvae,” she went on.

“So damaging the Spratlys is actually damaging the future food supply for all the coastal areas and anybody who’s fishing in the South China Sea.”

It was Simularity that reported the dumping of human waste at the Spratly Islands Group. The Philippines claims the northeastern section of the area as the Kalayaan Island Group, along with the Scarborough Shoal, which it calls the Bajo de Masinloc.

Derr explained key points of the report — “Sewage From Anchored Ships Is Damaging Spratly Reefs” — in her interview.

The dumped waste acts as nutrients, “like fertilizer,” that the microscopic plants in the water consume, she said. The leftover waste will then drop to the bottom of the sea where they are consumed by bacteria that use up oxygen — which results in what is called a “dead zone,” an area without oxygen.

“These nutrients can also to the plants that are on the reef and cause an overgrowth of those plants,” Derr said. “Like if you dumped a bunch of fertilizer on weeds, for example. The weeds would go crazy, and that’s essentially what’s happening. The sewage is essentially fertilizer for the weeds that we don’t necessarily want grow on the reefs.”

The plants and the algae on the coral can eventually kill it by releasing nutrients that will make the water more acidic, which will erode the coral.

Normally, the fish in the area will eat the algae, but because of overfishing, there are fewer fish left to eat the algae.

The plants release chlorophyll-a in the water. Over time, an increased concentration of chlorophyll-a can be detected by satellites and analyzed by AI-driven software — which is what Simularity has been doing.

It’s been going on for five years

Asked about the significance of a high concentration of chlorophyll-a, Derr said: “It means it has been going on for a while, and the imagery that we were able to analyze that has this special wavelength in it was from 2016.”

“And in just those five years — after all that artificial island-building and giant clam harvesting that was every bad for the environment — even after all that, we‘ve seen damage to the reefs in the Union Banks where the ships have been anchored, just in the last five years,” she added.

Asked if Simularity was sure that the ships dumping the waste were from China, she said: “From satellite imagery, we can’t definitively say that those are Chinese ships. But they seem to be the same ships that have been there since March, and they look very similar. So I think that in all probability they are.”

She added that it appeared that the ships were not moving at all, which meant that were still dumping their wastes in the water.

The environmental damage caused by overfishing and waste dumping would not be reversible on its own, she pointed out.

“You have to take active steps to do it,” she said. “Like, for example, reintroducing algae-eating fish into that area that has been overfished to start reducing the algae that are covering the reefs, and obviously, stopping the activity that is contributing to this algae explosion.”