The fight continues: The Mikeys’ community pantry helps 900 families in the first month

Every June, Pride Month celebrations commemorate the contributions and impact that LGBT+ individuals have made. This year, with the theme “The Fight Continues,” Pride organizations around the world are acknowledging the many battles the LGBT+ community faces, especially the way the ongoing pandemic is shaping our culture, our economy, our society, and ourselves.

For Michael Barilea, a business support consultant at Wells Fargo, the fight is a call to service. In mid-April, he saw a viral social media post of the simple bamboo cart and a few items with two signs proclaiming: “Maginhawa community pantry – Give what you can. Take what you need.” Inspired to replicate the model in his local community, he immediately gathered the financial support of his neighbors to buy groceries for a nearby under-resourced community. His pantry turned out to be one of hundreds that sprouted across the country in the days that followed. Together, these community pantries would address the urgent hunger crisis resulting from over a year of lockdown. 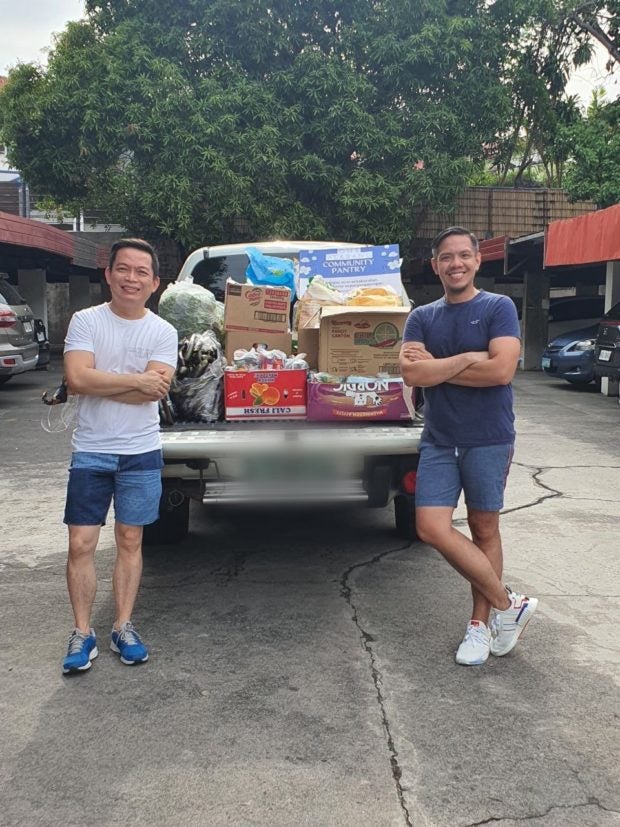 Barilea cites Do What’s Right — one of Wells Fargo’s Expectations of employees — as his motivation for setting up a community pantry in Alabang. “Knowing that people lost their jobs and were experiencing challenges to make ends meet, the only right thing to do was to help. Wells Fargo trained me to be a leader and not just a follower. I was motivated to step up and actually do something concrete.”

At work, Barilea is referred to as “Mr. Engagement” for his participation in employee engagement groups such as Pride Connections, Green Team, and Well-being Champions program, on top of his day job. “Wells Fargo gave me the opportunity to be part of organizing committees for these groups, which honed my skills. The pantry’s operations evolved to be more efficient and sustainable when I applied the lessons learned from those experiences,” he said.

Barilea and his partner, Michael Sioson, are known by their friends and neighbors as “The Mikeys.” After an initial community pantry launch on April 20, The Mikeys teamed up with a local grocery so the goods could be delivered directly to them for sorting into food packs. They coordinated closely with community representatives to distribute stubs and assign schedules to ensure goods were distributed evenly and safely, and with community volunteers to ensure that safety protocols could be followed at all times. After a fire ravaged a nearby low-income neighborhood, they used some of the funds to purchase construction materials to help survivors rebuild around 30 houses.

In total, after joining forces with nearby villages to scale up their operations, Barilea estimates they helped close to 900 families in their first month of One Alabang Community Pantry operations. 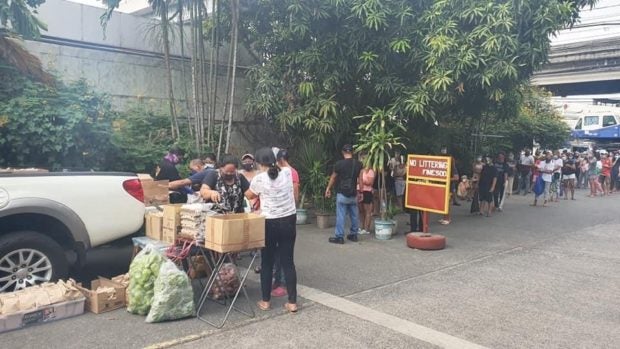 Hundreds line up at the Mikeys’ One Alabang Community Pantry.

This isn’t the first community service project the couple has done. Before the pandemic, The Mikeys would regularly participate in medical missions to help indigenous folks in Mindoro.

Barilea also credits Pride for helping him become a ‘late bloomer.’ In 2017, he had not yet embraced his identity fully, and he was looking for a sense of purpose. By following the example of his fellow Pride members, who were bold in taking action and advocating for themselves, Barilea learned how to do the same. “I used to wish I could be up front, waving the rainbow flag, standing with my LGBT+ brothers and sisters. I wasn’t ready then, but I am now.” Today, Barilea considers himself an out and proud gay man with a heart to serve his community. He has found his purpose.

Great things can come from small beginnings, just like the community pantry idea. “I know people are hesitant to take action, because they think their efforts are just small. If you want to fight for something, have a goal in mind, but don’t be afraid to take small steps,” Barilea reflected. He and Sioson talk often about sustainability. How long can they keep this up? “As long as there are people in need and people willing to help, we’ll be here. The fight continues.”

Addressing the state of the nation’s watersheds: Protect at all costs