MANILA, Philippines—World Oceans Day is celebrated each year across the globe every June 8.

The United Nations said the yearly event seeks to generate awareness on the impact of human activities on oceans, which is gaining relevance especially in the West Philippine Sea.

“World Oceans Day reminds everyone of the major role the oceans have in everyday life,” the UN said. “They are the lungs of our planet and a major source of food and medicine and a critical part of the biosphere,” it added.

As part of this year’s celebration of World Oceans Day, the global impact of illegal fishing, especially by China in the West Philippine Sea, is recalled.

A study published in 2020 in the scientific journal Science Advances revealed that between 2005 to 2014, at least 7.7 to 14 million metric tons of illegal fish catches were traded illicitly each year.

As a result, between $8.9 and $17.2 billion in gross revenues were lost to illicit trading.

The study also found that Asia, Africa, and South America were dealt a huge blow in illegal catch and gross revenue losses during the same period.

The Oceans Suffering Most From Illegal Fishing 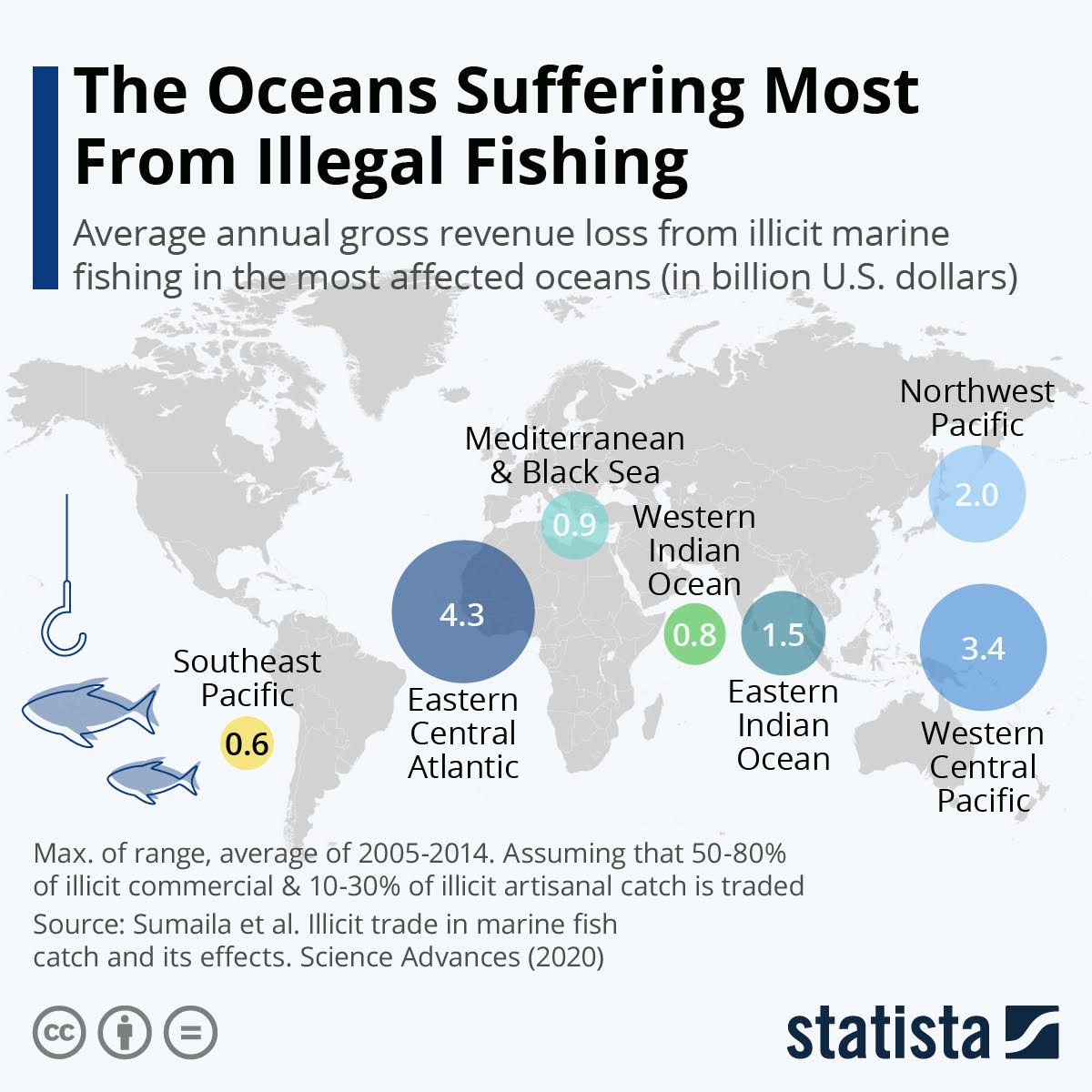 “Assuming that 50 to 80 percent of illicit commercial catch and 10 to 30 percent of the illicit artisanal catch is traded, up to $3.4 billion is lost every year in the Western Central Pacific (incl. the South China Sea), while up to $2.0 billion vanishes annually in Northeast Asia and up to $1.5 billion of revenue goes missing in the Eastern Indian Ocean every year,” said Statista’s Katharina Buccholz, citing the 2020 study.

The Central Eastern Atlantic lost around $4.3 billion each year.

Among the countries that suffered the most revenue loss due to illicit fishing were China, the Philippines, the US Pacific territories, Cambodia, Indonesia, Malaysia, Morocco, Mauritania, Russia, and Guinea.

The harmful economic impact of the illicit trade of illegally caught fish does not only harm annual revenues of regions or countries worldwide.

According to the study, illegal fishing has also brought to Asia food insecurity, job loss, and income loss for local fishers.

In 2019, out of a total of 152 coastal states assessed worldwide, China gained the worst scores for their degree of exposure to and quality of response toward illegal, unreported, and unregulated (IUU) fishing. 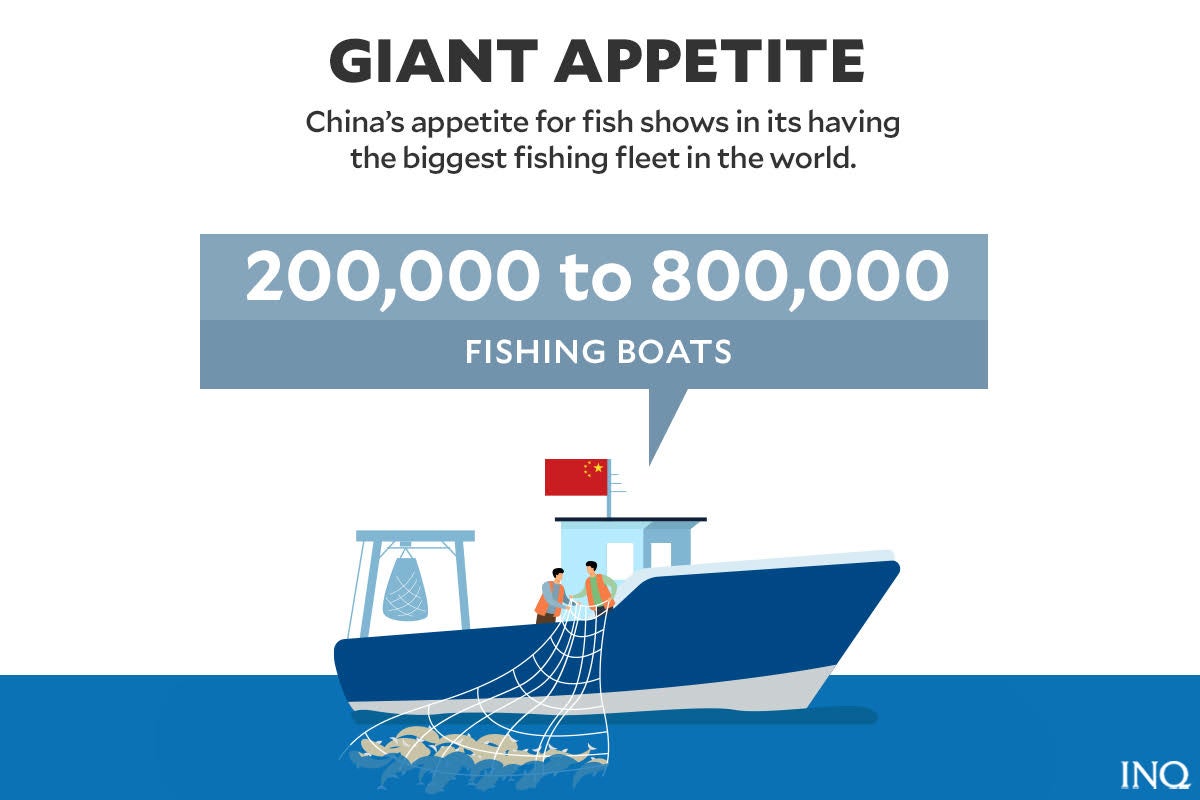 China, which operates the world’s largest overseas fishing fleet with 200,000 to 800,000 fishing boats, accounts for nearly half of the world’s fishing activity— according to an article published in 2020 at the Yale School of the Environment.

Aside from being the world’s biggest seafood exporter, China’s population also accounts for over a third of the total fish consumption worldwide.

“Having depleted the seas close to home, the Chinese fishing fleet has been sailing farther afield in recent years to exploit the waters of other countries, including those in West Africa and Latin America, where enforcement tends to be weaker as local governments lack the resources or inclination to police their waters,” said investigative reporter Ian Urbina in his article.

“Most Chinese distant-water ships are so large that they scoop up as many fish in one week as local boats from Senegal or Mexico might catch in a year” he added.

China has also expanded its maritime presence in Northeast Asia and most notably in the West Philippine Sea—causing the still unresolved territorial dispute and tension between the Philippines and China.

This was despite the international arbitral ruling in The Hague in 2016 which declared China’s mythical nine-dash claim to most of the South China Sea, including the West Philippine Sea, as invalid and baseless.

China, according to the ruling, violated Philippine sovereignty and Filipinos’ right to fish and explore resources in the West Philippine Sea. Beijing considered the ruling as trash and does not recognize it.

The Philippines, along with fellow Southeast Asian neighbors Brunei, Malaysia and Vietnam, have overlapping claims to the sea along with China. Despite an agreement to refrain from provocative actions, China has continued to expand and militarize territories that it claims in the maritime region.

The Homonhon Environmental Rescue Organization (Hero), a grassroots environmental group, has previously said that Chinese vessels off San Antonio town in Zambales are poaching in the area. 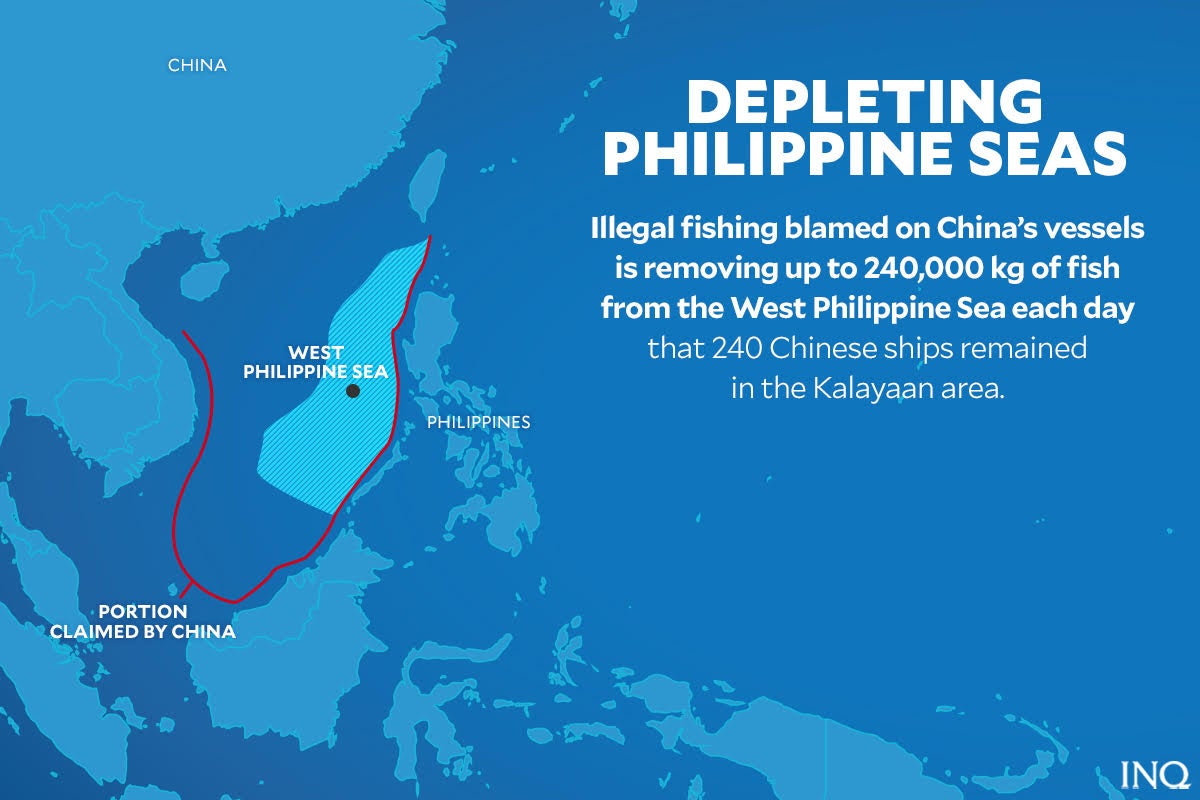 “The Chinese fishermen have been overfishing, depleting our marine resources,” said Hero’s president Villardo Abuene in a statement last April.

“They even sell their catch to our fishermen at a higher price,” Abuerne added.

He also believes that the country could soon face a fish shortage due to China’s illegal fishing in Philippine waters.

Perez explained that the Chinese vessels might have already caught at least 54,984 metric tons of fish since the Philippine Coast Guard (PCG) first reported the sighting of the China vessels in March.

It is a portion of the expected 323,312 metric tons of fish from the West Philippine Sea in 2021—which represents seven percent of the Philippines’ fisheries output. 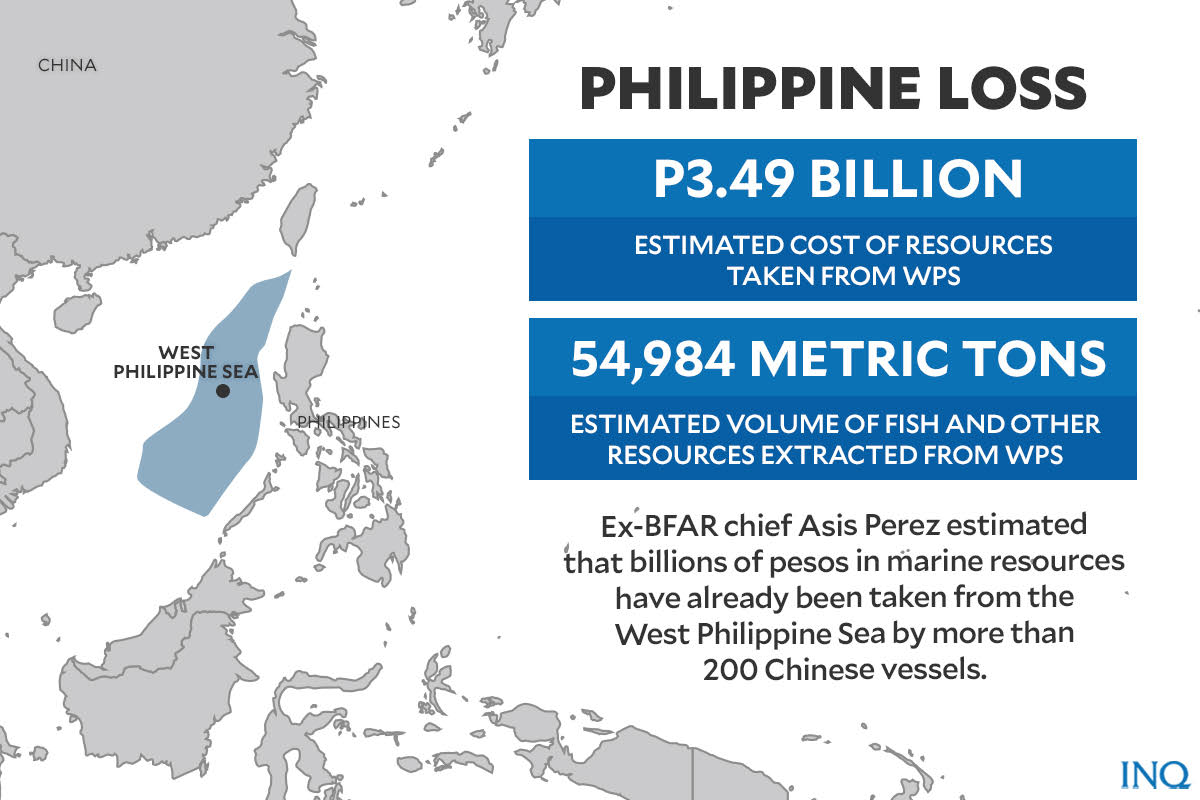 Aside from fish, Chinese poachers have also been illegally harvesting giant clams off waters of Pag-asa Island.

According to NTF-WPS, the Philippine Coast Guard last April found Chinese poachers collecting giant clams in the vicinity of Pag-asa.

“The poachers quickly departed when approached by the Philippine Coast Guard.,” said NTF-WPS. “This act is a blatant violation of Philippine fisheries and wildlife laws, and the Convention on International Trade of Endangered Species of Wild Fauna and Flora (CITES),” the task force said.

In 2019, fishermen in Pangasinan reported the then ongoing harvesting of giant clams at Panatag Shoal by several Chinese fishing vessels.

Jay Batongbacal, director of the University of the Philippines Institute for Maritime Affairs and Law of the Sea, explained that the Chinese sell giant clams which are used to carve figurines.

“It’s a substitute for ivory. Some of them are also used as jewelry materials,” Batongbacal said in an earlier Inquirer interview.

He said clam harvesting may have accelerated in 2012 when China seized the shoal following a standoff with the Philippine Navy. 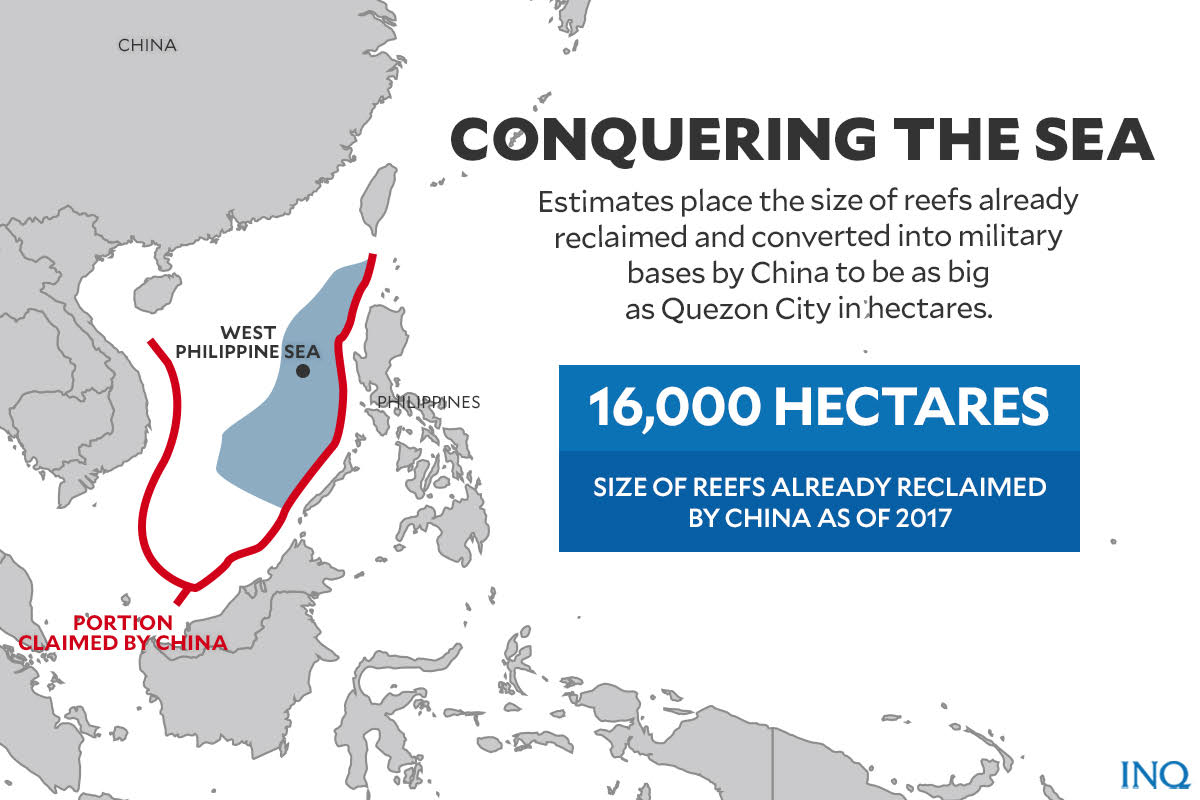 Deo Florence Onda, a scientist at the UP Marine Science Institute (UP MSI), has estimated in 2019 that China’s reclamation activities and illegal fishing operations may cause huge damage to the reef ecosystems at Panatag (Scarborough) Shoal and the Spratly Islands.

Cost of China damage to PH reefs: P33B a year

It will then lead to around P33.1 billion annual losses.

The Advocates of Science and Technology for the People, or collectively known as Agham, has also recently raised alarm over the impact of the environment and fisheries damage in the West Philippine Sea on the country’s fisheries production and fisherfolk welfare.

“With China’s illegal encroachment, fishes and other marine species are bound to lose their habitats as reclamation and the building of military bases has destroyed at least 16,000 hectares of reefs as of 2017. Rampant poaching of giant clams will also affect reefs,” the group said in a statement.

“China’s activities will also lead to a loss in the livelihood of about 627,000 fisherfolk, as their continuing aggression poses threats to the safety of our fisherfolk,” it added.

What else are they after?

According to Urbina, China’s interest in the West Philippine Sea—aside from fishing rights and the “political desire for control over a region through which a third of the world’s maritime trade flows”—may stem from its reported oil and gas deposits.

In 2020, the Philippine government has lifted a nearly six-year moratorium on oil and gas exploration in the West Philippine Sea.

The moratorium was issued under the Aquino administration in 2014 amid rising geopolitical tensions between the Philippines and China.

However, in 2019, President Rodrigo Duterte’s pivot to China enabled the signing of a memorandum of understanding between Manila and Beijing for a joint oil and gas exploration deal in the West Philippine Sea.