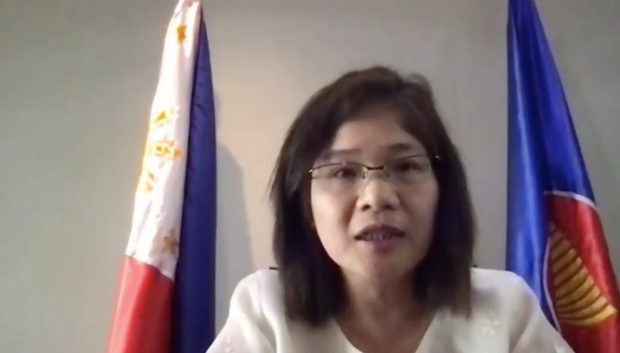 Deputy Permanent Representative Elizabeth Te of the Philippines Mission to Asean said during her Commission on Appointments.

MANILA, Philippines — China has been “remiss” in its obligations under the United Nations Convention on the Law of the Sea (UNCLOS), a Filipino envoy to the Association of Southeast Asian Nations (Asean) said as the Philippines protests recent Chinese actions in the West Philippine Sea.

“Yes, China has been remiss,” Deputy Permanent Representative Elizabeth Te of the Philippines Mission to Asean said during her Commission on Appointments (CA) hearing Wednesday.

This was her response when asked by Senator Risa Hontiveros if the envoy thinks that China was “remiss” in “keeping its word” in the maritime dispute with the Philippines.

“Because at this point, it’s known to everyone that her (China) presence in our territorial waters for the past months continues to post a threat to our national security,” Hontiveros added.

China and countries that have conflicting territorial claims over the South China Sea, including Asean members Philippines, Vietnam, Malaysia, and Brunei, have been negotiating for the passage of a Code of Conduct, an accord that seeks to prevent the escalation of tensions in the disputed waterway.

The Philippines serves as the country coordinator for Asean-China dialogues.

“As the country coordinator of the Asean-China dialogue, we continue to impress upon China that, yes, China has not exactly been abiding by its responsibilities because China is a state party to the United Nations Convention on the Law of the Sea and China has not been exactly implementing its obligations under the convention,” Te told said.

“In my meetings with the Chinese mission here in Asean, we’ve also emphasized that it is important that the situation on the ground in the South China Sea be taken into consideration [in dialogues],” she added.

The Department of Foreign Affairs (DFA) has so far lodged 100 diplomatic protests against China since the start of the Duterte administration, the most recent of which is over the “incessant” deployment of Chinese maritime and fishing vessels around Pag-asa Island.

While the maritime dispute between the Philippines and China is an important aspect of the relations between the two countries, Te also emphasized that it was not the “totality” of the nations’ diplomatic ties.

“It (China) has played its role, for example, in the COVID-19 pandemic, in pandemic response, China has actively supported all the Asean member states in terms of vaccines and all the other support. We have also emphasized bilaterally that the South China Sea is, of course, one aspect of our relationship and it’s not the totality, it’s not the entirety of our relationship,” she said.

Read Next
Senate thanks US for return of Balangiga Bells
EDITORS' PICK
Duterte warns of possible lockdown if ‘more aggressive’ Delta variant spreads
Tips for a cheerful life
Harnessing technology for quality education
Hidilyn Diaz wins weightlifting gold in Tokyo Olympics
Duterte: When I said I will fight drugs in 6 months, I thought it was like in Davao
Connect to PH’s fastest network with new Signature Plan Lite at only P599 per month
MOST READ
Hidilyn Diaz wins weightlifting gold in Tokyo Olympics
Go to war with China over West PH Sea? It will be a ‘massacre’, says Duterte
Hidilyn shoots not only for gold but also for permanent place in PH sports history
Duterte acclaims Sotto: ‘He can become a good vice president’
Don't miss out on the latest news and information.