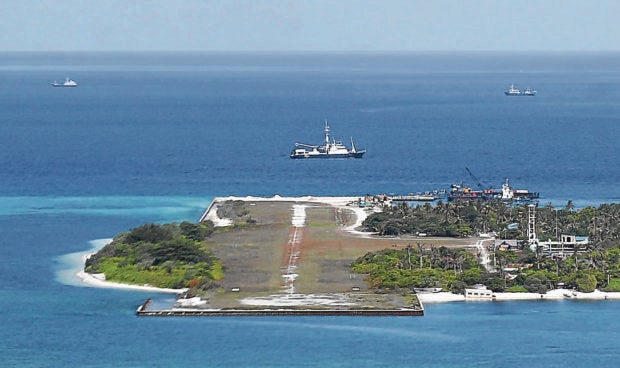 Aerial view of Pag-asa Island in the Kalayaan Group of Islands, Palawan as seen from the cockpit of a PAF C-130T.   (INQUIRER PHOTO/LYN RILLON)

MANILA, Philippines — The Philippines has continued to protest China’s incursions in the West Philippine Sea, this time over the “incessant deployment, prolonged presence, and illegal activities”of Chinese maritime and fishing vessels in the vicinity of the Pag-asa Island.

“The Department of Foreign Affairs lodged a diplomatic protest yesterday against the incessant deployment, prolonged presence, and illegal activities of Chinese maritime assets and fishing vessels in the vicinity of the Pag-asa islands, demanding that China withdraw these vessels,” the DFA said in a statement Saturday.

The DFA asserted that the “Pag-asa Islands is an integral part of the Philippines over which it has sovereignty and jurisdiction.”

This protest was the latest of several diplomatic protests recently filed by the DFA over the lingering presence of Chinese vessels in the West Philippine Sea, most notably at Julian Felipe Reef.

The presence of the vessels in the area prompted Philippine authorities to bolster its patrols in the country’s exclusive economic zone (EEZ).

According to American think-tank Asia Maritime Transparency Initiative (AMTI), it monitored 13 Philippine law enforcement or military vessels making at least 57 trips around the Spratly Islands and Panatag (Scarborough) Shoal, a geographical feature in the West Philippine Sea, from March 1 to May 25 this year.

In 2013, the Philippines filed a case with the Permanent Court of Arbitration (PCA) at The Hague challenging China’s sweeping claim of nearly the entire South China Sea, including parts of the West Philippine Sea.

The Hague-based court ruled in favor of the Philippines in July 2016, invalidating China’s nine-dash line claim.

This week’s protest from the DFA comes after the Philippines and China agreed, in a bilateral dialogue last week, on the importance of holding dialogues on territorial disputes in the West Philippine Sea to deescalate tension over the disputed waters.