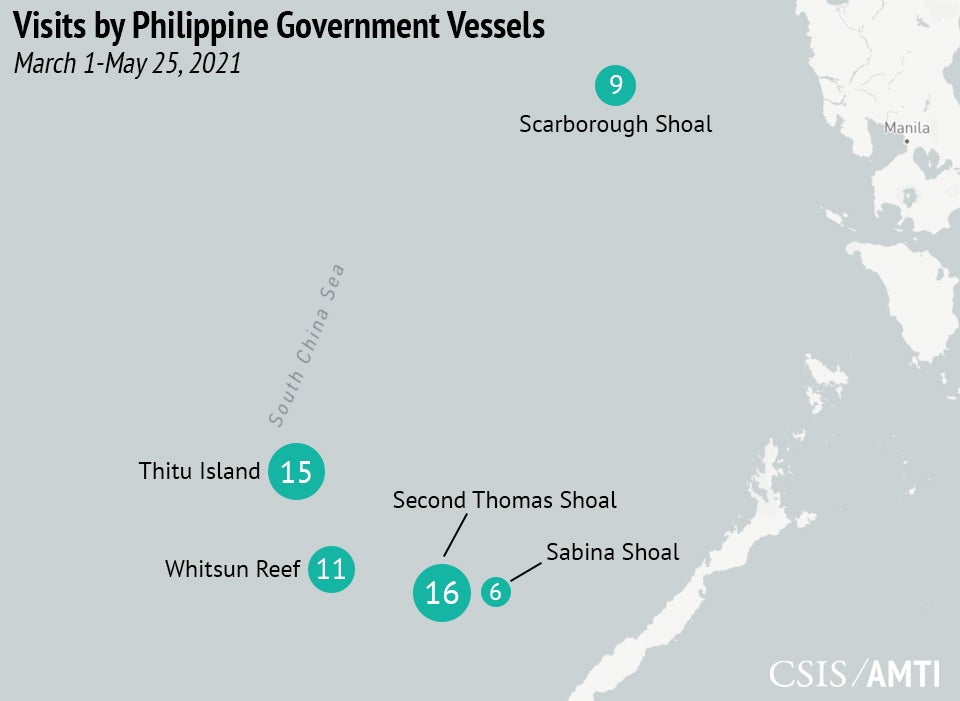 FROM7 TO 57 The US-based think tank Asia Maritime Transparency Initiative (Amti) said that from March 1 to May 25 it recorded at least 57 visits of Philippine government vessels at various features of the West Philippine Sea. It noted a “substantial increase” in such visits from only seven that was recorded between May 2020 and February 2021. —INFOGRAPHIC FROM AMTI

MANILA, Philippines — Hundreds of Chinese vessels which sailed away from Julian Felipe (Whitsun) Reef after a series of diplomatic protests from Manila never left the waters within the exclusive economic zone (EEZ) of the Philippines, a US-based research company reported recently.

In its May 24 report, Simularity, which analyzes satellite data, said most of these ships were spotted on the Philippine EEZ side of the Tizard Bank, around 25 kilometers north of Pagkakaisa (Union) Banks and Reefs.

Using satellite data from the European Space Agency, Simularity tracked the more than 200 Chinese fishing vessels, believed to be part of China’s maritime militia. They were found by the Philippine Coast Guard (PCG) in early March at Julian Felipe.

Between May 13 and May 18, a total of 261 Chinese vessels were found by Simularity in the West Philippine Sea: 234 at Burgos (Gaven) Reef, 18 near the Philippine-occupied Pag-asa (Thitu) Island, and nine at McKennan (Hughes) Reef. Of these, at least 120 were within the Philippines’ 370-kilometer EEZ.

Constantly present China built artificial islands which it transformed into military outposts on both Burgos and McKennan.

Going by Simularity’s earlier report, Chinese vessels have been constantly present within the country’s EEZ since at least November last year.

Simularity said that “a vast majority” of these ships resembled the vessels that swarmed Julian Felipe in March.

The satellite images “illustrate that the Chinese fishing ships that were at Whitsun Reef in March, moved to Hughes Reef in April, and are now gathered at Gaven Reef,” Simularity said. 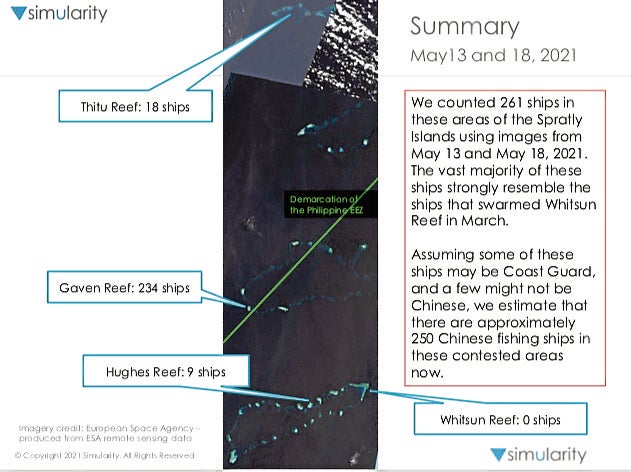 STILL MOORED Using satellite data from the European Space Agency, US-based company Simularity tracked down 261 Chinese vessels in waters within the Philippine exclusive economic zone. Simularity said the Chinese ships first detected at Julian Felipe Reef in March did not really leave the West Philippine Sea but only moved southwest to McKennan Reef in April and traveled northward in May to Burgos Reef,where they are currentlymoored. — SATELLITE IMAGES FROM SIMULARITY/EUROPEAN SPACE AGENCY

There was no comment on Simularity’s report from the task force, which was prohibited from making comments on the West Philippine Sea by President Duterte.

Amti reported on May 26 that from March 1 to May 25, it observed 13 Philippine law enforcement and other vessels visiting waters around Kalayaan Island Group (KIG) in the Spratlys chain and Panatag (Scarborough) Shoal 57 times.

This is a “substantial increase” from the total of seven visits of three Philippine vessels to the same areas between May 2020 and February 2021.

Amti also noted the change in the locations of patrols conducted by the Philippines.

Prior to the March incursion by the Chinese vessels, Philippine ships, particularly of the Navy and the Coast Guard, were only patrolling waters around Pag-asa, its largest outpost in the KIG.

But recent patrols had been deployed to other features such as Ayungin (Second Thomas) Shoal occupied by the Philippines, Julian Felipe, Escoda (Sabina) Shoal, and Panatag, which had been under Chinese control since 2012.

“The Philippines’ increased patrol efforts send a message that Manila is determined to assert its rights. But they pale in comparison to China’s near-permanent coast guard and militia presence throughout the South China Sea,” Amti said.

Only a few ships from the PCG and the Bureau of Fisheries and Aquatic Resources can travel safely to Kalayaan and Panatag, and spend only a day or two there before moving on.

“But while Manila’s combination of more public protest and greater presence seems to have had some success in dispersing Chinese vessels at Whitsun Reef and Sabina Shoal, it hasn’t impacted the overall number of Chinese vessels operating in disputed waters,” the Amti report noted.