What do we owe China? | Global News
Close
menu
search

What do we owe China? 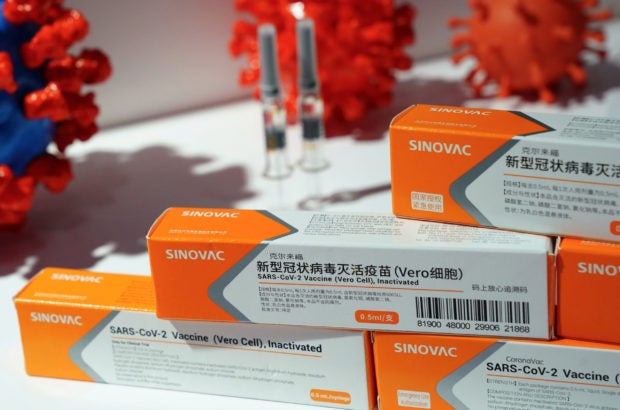 A booth displaying a coronavirus vaccine candidate from Sinovac Biotech Ltd is seen at the 2020 China International Fair for Trade in Services, following the COVID-19 outbreak, in Beijing, China in 2020. (Reuters)

MANILA, Philippines — In the past months, amid the ongoing tension over claims to the West Philippine Sea, President Rodrigo Duterte made several pronouncements saying that the Philippines owed a “debt of gratitude” to China.

“For the record, we do not want war with China. China is a good friend. We owe it a big debt of gratitude, among others for the vaccines [it has donated to us],” Duterte said, speaking partly in Filipino, in a pre-recorded briefing last April 18. 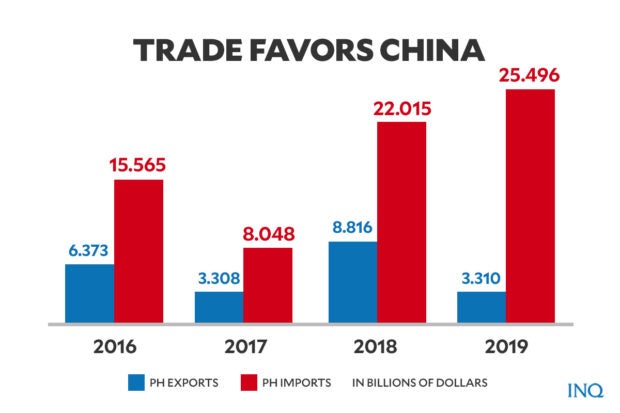 “So China, let it be known, is a good friend and we do not want trouble with them especially a war,” Duterte added.

In a separate speech, Duterte reiterated his statement, adding that it is “never wrong” to admit that the Philippines owed China a debt of gratitude for China’s donation of coronavirus vaccines. 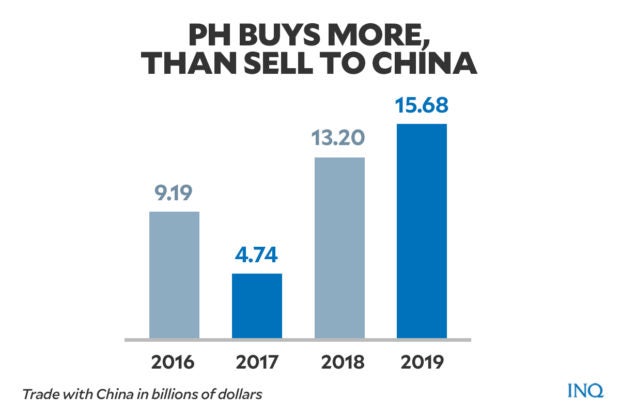 But aside from the donated jabs of Sinovac’s CoronaVac vaccine, how much do we really owe China?

For context, between February and March this year, the country has received a total of 1,000,000 doses of vaccines from China.

Aside from this, China’s smaller local units have also provided other essential supplies during the pandemic.

In the same period, the government of China delivered 100,000 test kits, 100,000 surgical masks, 10,000 N95 masks, and 10,000 sets of personal protective equipment after Filipino health care workers called for donations due to a shortage of protective equipment.

The Philippines continued to receive coronavirus test kits and medical-surgical masks from China in April, May, and August 2020. 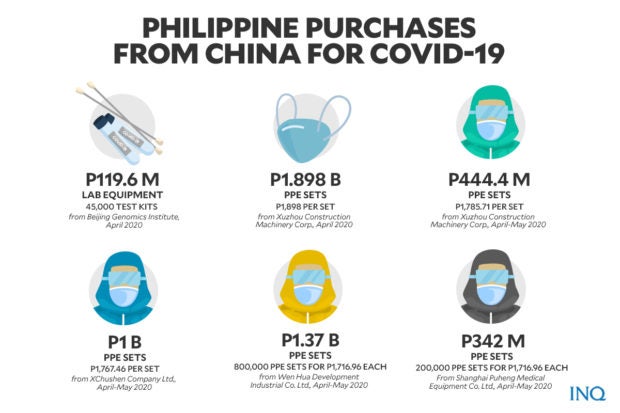 Meanwhile, to help Filipino students overcome difficulties and to get better access to distance learning resources amid the pandemic, the Chinese Embassy donated 2,000 tablets.

The Philippines purchased a total of 4,000,000 doses of Sinovac vaccines which arrived between March and May 2021.

In 2020, the government also procured a hefty amount of PPE sets from China, which opposition Sen. Risa Hontiveros had described as “overpriced.”

Hontiveros said of the 11 contracts that the Department of Budget and Management (DBM) entered into for PPE sets in April and May, five were with Chinese companies.

The Philippine government had separately purchased another 1 million PPE sets, worth P1.8 billion, from China to support health workers and those on the frontline of the battle against COVID-19.

In the same period, the Philippine government also bought $2.5 million worth of lab equipment for coronavirus testing which consists of 45,000 test kits from the Beijing Genomics Institute (BGI).

China also gave help to those who were displaced by Typhoon Ulysses in November 2020. According to the Chinese Embassy, a total of 3 million RMB (around P22 million) in donations was given to the Philippine government.

An additional P7.3 million worth of relief goods was also turned over for victims of Super Typhoon Rolly, the world’s strongest tropical cyclone in 2020.

Other than donations, grants and loans were also secured from China by the Philippines.

These included a $750 million loan from the Beijing-based Asian Infrastructure Investment Bank (AIIB) in June 2020 for the COVID-19 Active Response and Expenditure Support (CARES) Program.

Last February, the AIIB approved another $300 million in loan to the Philippine government for the procurement of vaccines for the Philippines’ vaccination rollout.

Earlier in 2021, a 500-million renminbi (P3.72-billion) grant was provided to the country by the Chinese government for livelihood and infrastructure projects.

The grant, according to China’s Foreign Minister Wang Yi, was also for the Duterte administration’s COVID-19 response.

In terms of official development assistance (ODA) financing, the National Economic and Development Authority (Neda) reported in 2020 that China has so far extended only three loans and two grants worth $590.4 million.

In terms of trade, China has been among the Philippines’ major trading partners through the years.

According to data by the Philippine Statistics Authority (PSA), China was the Philippines’ top trading partner from 2016 to 2019.

For four consecutive years, among the Philippines’ top trading partners including Japan, United States, and Hong Kong, China has dominated the number of import commodities sent to the Philippines.

The PSA said Imported goods purchased from China were mostly electronic products worth $3-4 billion and iron and steel with an import value of $2 billion to $3 billion.

However, export receipts between the Philippines and China were significantly lower than import payments. This means that the Philippines was buying more from China and not getting as much profit from selling to China.

Following the delivery of the first batch of donated Sinovac vaccines last February, Duterte told the public that the Chinese government did not ask for anything in return for its donation.

“China never asked for anything. China has been giving us everything but never asked anything from us actually,” the President said.

This is not the first time Duterte said this. Way back 2016, he also explained that the P90 million financial assistance of China to the Philippines for disaster relief efforts after the onslaught of Super Typhoon “Lawin” (international name: Haima) has “no strings attached.”

From ‘utang na loob’ to bondage