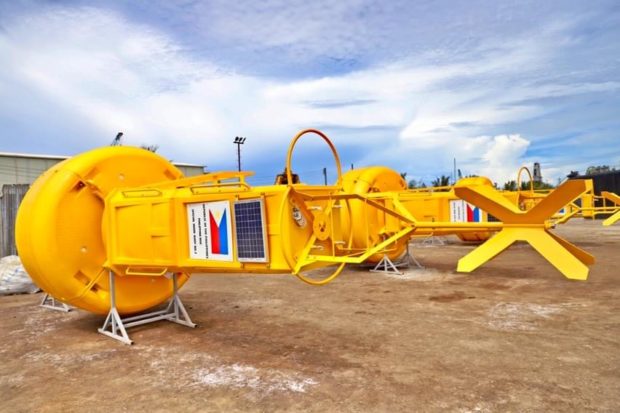 NO JOKING HERE The Philippine Coast Guard (PCG) is set to deploy the first three of 10 technologically enhanced buoys in the Philippine Rise (formerly Benham Rise), a submerged, resource-rich landmass off the eastern coast of Luzon. The area is not being claimed by any other state but the PCG says the buoys will be placed there not only to aid navigation but to make a timely statement: This belongs to the Filipino people. —PHOTO COURTESY OF THE PHILIPPINE COAST GUARD

MANILA, Philippines — The Philippine Coast Guard (PCG) is set to install the first three of 10 state-of-the-art lighted ocean buoys to mark Philippine (Benham) Rise, the submerged, resource-rich landmass off the eastern coast of Luzon, as part of the country’s exclusive economic zone.

The 30-foot long buoys, which arrived in Cebu from Valencia, Spain, on May 7, are equipped with modern marine aids to navigation lanterns and specialized mooring systems. They also come with a remote monitoring system that uses satellite technology to transmit data to the PCG national headquarters in Port Area, Manila.

Leading the inspection of the ocean markers on Monday, Admiral George Ursabia Jr., the PCG commandant, said the deployment of buoys in the Philippine Rise will effectively convey the message that the waters in that vicinity are part of a special protected zone.

“Hence, mining and oil exploration are strictly prohibited to preserve its rich natural resources,” Ursabia said in a statement.

“Moreover, the ocean markers will also be used by the PCG to mark the designated food supply exclusive zone and ensure safe navigation in the Philippine Rise,” he added.

The Philippine Rise is not being claimed by other countries. In May 2017, President Duterte signed Executive Order No. 25 changing its name from Benham Rise to emphasize the country’s sovereign rights and jurisdiction over the area, as stated in the Constitution and other national laws, the United Nations Convention on the Law of the Sea (Unclos), and applicable international laws.

The UN Commission on the Limits of the Continental Shelf ruled in 2012 that it was part of the country’s extended continental shelf, giving the Philippines the right to explore, exploit, conserve and manage the area’s natural resources. 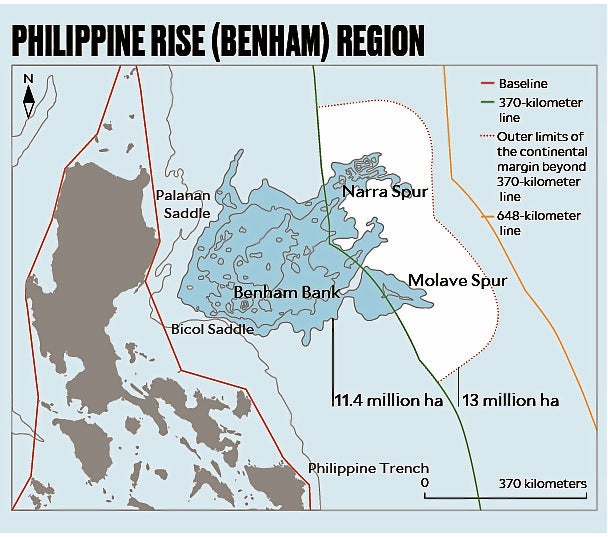 The landmass, with its shallowest part at 50 meters below sea level, is known as a rich fishing ground for fishermen from Aurora, Quezon, and the Bicol provinces. Locals from Catanduanes province, who can reach it after a 12-hour boat ride, call it “Kalipungawan” (loneliness).

With an area bigger than that of Luzon, Philippine Rise extends eastward off the provinces of Aurora and Isabela, and the Bicol region. The extended continental shelf in Philippine Rise has an area of 135,506 sq km (13.5 million hectares), equivalent to about half of the country’s land area. — Tina G. Santos