China sought clearance for survey ship after it was already in PH waters, DFA timeline shows 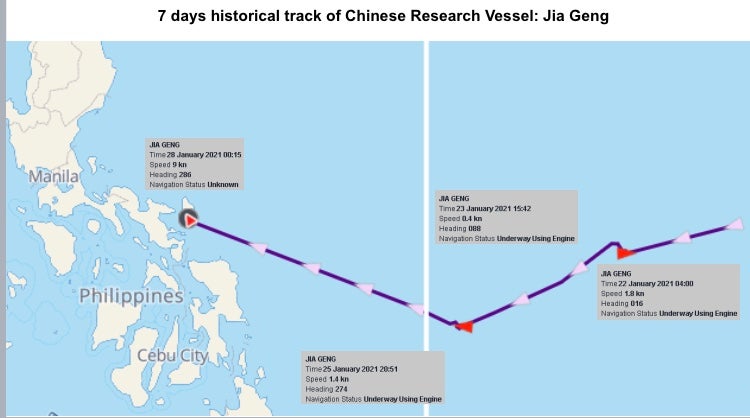 MANILA, Philippines—A clearance for Chinese survey ship Jia Geng to take shelter off Catanduanes was sought only after it entered Philippine waters, a timeline from the Department of Foreign Affairs (DFA) showed.

Based on the timeline posted by Foreign Affairs Secretary Teodoro Locsin Jr. on Twitter on Tuesday (Feb. 2), Jia Geng was already in the Philippines’ exclusive economic zone (EEZ) on Wednesday (Jan. 27).

On Thursday (Jan. 28), Locsin said the Philippine embassy in Beijing relayed a phoned in request to allow the Chinese marine research vessel to take shelter in Cabugao Bay.  Around this time, Jia Geng was already approaching the vicinity of Bato, Catanduanes, based on open-source ship trackers and a military report seen by INQUIRER.net.

By Friday (Jan. 29), the Chinese embassy in Manila sent an official note with the same request. The Philippine Coast Guard said it gave radio challenge to Jia Geng and tried to board the ship but was not allowed by the Chinese crew, Locsin said.

A green light was finally given by the DFA on Jan. 31, or at least four days after the Chinese ship had entered the Philippines’ EEZ.

The Chinese embassy in Manila said “the fact is that the Chinese scientific survey ship is seeking humanitarian shelter in Philippine waters due to unfavorable weather and sea conditions in the Pacific where they are scheduled to conduct research mission.”

Curiously, there was no weather disturbance around the area at that time, according to some local maritime authorities and weather reports.

This is not the way things are usually done, even in emergencies. For maritime law expert Jay Batongbacal, clearance should be secured first before entering and engaging in conduct for which clearance is requested.

“I think it’s clear that the vessel entered the EEZ first then requested to take shelter after. Ship had already been tracked and found anchored at Catanduanes on Jan. 28, by time request was made. So request came after the fact,” Batongbacal said.

“Normally one declares an emergency and calls on nearest authorities on the ground to say so and seek assistance. Just so it’s clear that there is one, and it’s not an afterthought excuse,” he said.

“Besides, what was the nature of the emergency? A ship like that would be designed to endure rather difficult weather also. It’s a deep sea research vessel,” he added.

The Chinese ship left Catanduanes on Monday (Feb. 1) morning, escorted by a Philippine Coast Guard Islander plane. Ship tracking data showed it went farther away from the coast and passed through Benham Rise.

Maritime security expert Collin Koh, of the S. Rajaratnam School of International Studies in Singapore, who also closely watched the situation, said Jia Geng should have stayed close to the coast if there were concerns on the weather and sea conditions.

“If the ship had ‘sought humanitarian shelter in Philippine waters due to unfavorable weather and sea conditions in the Pacific,’ as asserted by the PRC embassy, it should have simply hugged the coast as best as possible so it can avail itself of shore-based assistance,” he said on Twitter.