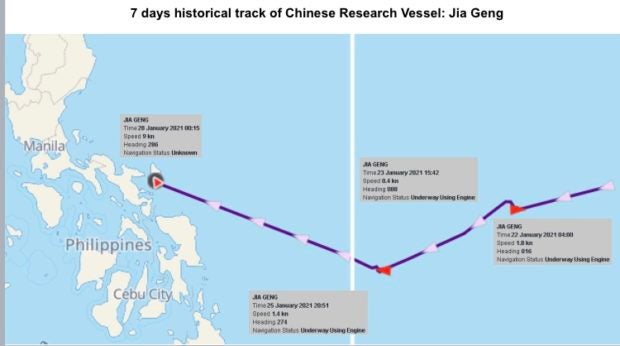 Chinese research vessel Jia Geng was seen anchored off the coast of Bato, Catanduanes since Jan. 28. Authorities say that its presence in Philippine waters in the last few days had no clearance from the Philippine government. Contributed photo

MANILA, Philippines—A Chinese survey ship that was spotted operating without consent in northern Philippine waters in 2020 has been sighted again within the country’s territorial waters, this time in the eastern side.

Chinese research vessel Jia Geng was seen anchored off the coast of Bato, Catanduanes since Jan. 28. INQUIRER.net learned from authorities that its presence in Philippine waters in the last few days had no clearance from the Philippine government.

The Chinese vessel entered the Philippines’ exclusive economic zone last Jan. 25. Ryan Martinson of the US Naval War College, posted on Twitter last Jan. 27 the vessel’s location—130 nautical miles east of Samar province. It was running at 8 knots without indications that it was conducting a marine scientific research.

The Chinese research vessel "Jiageng" is back operating in the Philippines exclusive economic zone. Current location about 130 nautical miles east of Samar. pic.twitter.com/lhvC0RlyrI

A government source said that the vessel sought clearance from the Philippine government last Jan. 28 to drop anchor in Cabugao Bay from Jan. 29 to Feb. 2 “due to weather and sea conditions,” but the application remained pending as of posting time.

Jia Geng’s request raised the eyebrows of some local maritime authorities because there was no weather disturbance in the area. The northeast monsoon, while affecting the entire country, had not brought any weather condition that justified a foreign ship’s intrusion into Philippine territory. The vessel’s design was fit for cruising in the open seas.

Jia Geng’s presence inside Philippine EEZ could be part of a larger ploy to gather data. Based on ship tracking data shared to INQUIRER.net, Jia Geng had been conducting research in the northwest Pacific and was running at 1 knot, or nearly stationary, for a few days before it entered Philippine waters. The Chinese ship left Gaoqi Wharf in Fujian Sheng, China last Dec. 23 and passed through the high seas in between Taiwan and northern Luzon before it entered the Pacific.

There is a possibility that the vessel could be heading to Benham Rise, which is also of a particular interest to China, according to a naval expert who analyzed Jia Geng’s track. Also known as the Philippine Rise, the 13-million hectare Philippine territory off the coast of Aurora province is rich in resources and  considered part of the country’s extended continental shelf.

Maritime law expert Jay Batongbacal said that Jia Geng’s presence in the Philippines should be given attention because China has not yet given any explanation for previous intrusions and in fulfilment of its obligations. There should be transparency and prior clearance for Chinese ships to enter Philippine waters, he said.

“This is due to the nature of the vessel and its previous conduct. Sheltering from bad weather is allowed in international law, but the government should ensure that rights are not abused,” he said.

The same vessel became the subject of a diplomatic protest by the Department of Foreign Affairs in 2020 after it was spotted in Philippine waters in northern Luzon also without permission from the Philippine government.

When Philippine authorities called out Jia Geng for loitering near Calayan Island, Cagayan province in September 2020, it gave the same reason for intrusion—it was seeking refuge from bad weather.

The vessel’s shipbuilder, Guangzhou Shipyard International, described the Jia Geng as one of Beijing’s top research ships. It is owned and operated by Xiamen University, a public research university in China.

Built in 2017, the ship is 77.7 meters long and capable of carrying more than 50 people. It has a maximum speed exceeding 14 knots.

Oceanographic surveys have several purposes and are entirely lawful, but experts say that research carried out by civilian ships have indispensable data that can have military applications.

Read Next
PH, other SCS claimants can file joint protest before UN vs China coast guard law — senator
EDITORS' PICK
EDITORIAL: Good news, bad news
Ahead of ONE: Full Blast II, Mongkolpetch warns Elias Mahmoudi: ‘Watch out for my fists’
1Sambayan to nominees: Stick to word of honor
Trust Robredo’s political instincts – Kaya Natin! convener
Kai Sotto continues to inspire Filipinos by sharing his passions and stories with Smart Prepaid
Alex Eala wins Grand Slam on Independence Day: ‘I hope I made my contribution to the country’
MOST READ
China cautions G7: ‘small’ groups don’t rule the world
1Sambayan to nominees: Stick to word of honor
Duterte, Mayor Sara unlikely to run under same slate in 2022, says Lacson
Leni vs. Sara
Don't miss out on the latest news and information.

Ahead of ONE: Full Blast II, Mongkolpetch warns Elias Mahmoudi: ‘Watch out for my fists’

1Sambayan to nominees: Stick to word of honor

Alex Eala wins Grand Slam on Independence Day: ‘I hope I made my contribution to the country’

1Sambayan to nominees: Stick to word of honor

Rare earth metals at the heart of China’s rivalry with US, Europe