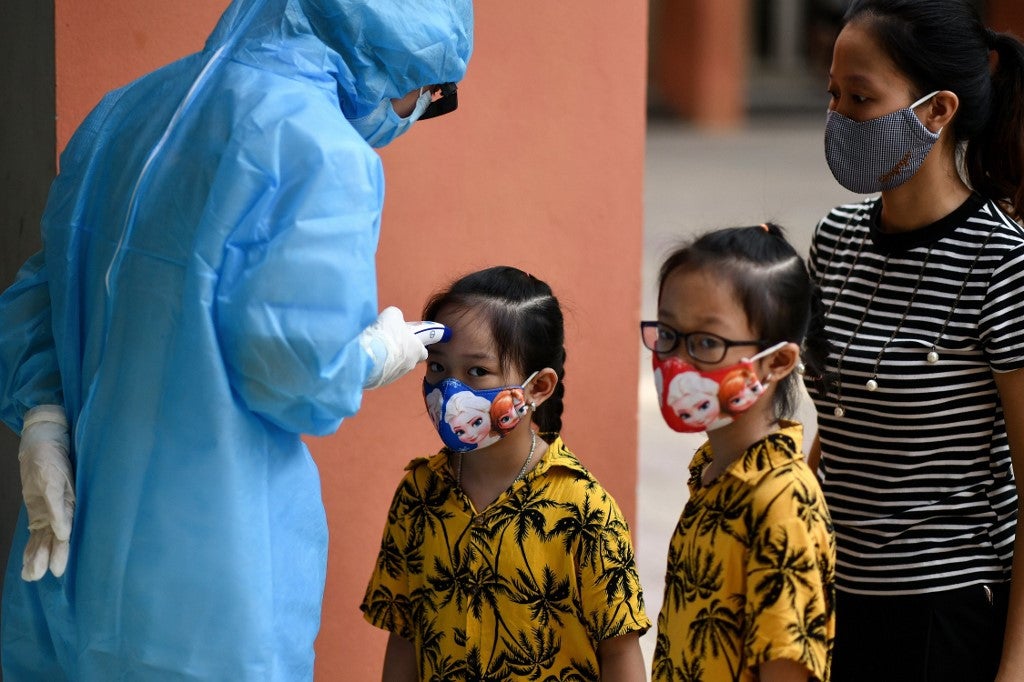 A health worker wearing protective gear checks the temperature of a young girl at a makeshift rapid testing center in Hanoi on July 31. Vietnam has recorded a rise in COVID-19 cases after previously appearing to have stopped local transmission of the virus. (AFP/Manan VATSYAYANA )

JAKARTA — Southeast Asia must step up its COVID-19 response to combat the imminent deepening of inequality, United Nations secretary general António Guterres said in a recent report highlighting weak health systems and connectivity in the region.

“The pandemic has highlighted deep inequalities, shortfalls in governance and the imperative for a sustainable development pathway. And it has revealed new challenges, including to peace and security,” Guterres said in a statement last week, suggesting that the region had much work to do.

The secretary general published a policy brief on Wednesday highlighting the disproportionate impact of the pandemic on vulnerable groups and the danger that many would be pushed back into poverty and unemployment.

Some countries remain unable to address COVID-19 sufficiently. More than half of the countries in Southeast Asia are vulnerable because of weak health systems, according to the report.

“The World Health Organization’s universal health coverage index of service coverage reported a median index of 61 out of 100, suggesting that much more progress is needed,” the report read.

However, the region has reported significantly fewer confirmed COVID-19 cases and related deaths than most other global regions with some variation among countries. The report noted that regional cooperation had been “robust”.

UN Economic and Social Commission for Asia and the Pacific (Unescap) executive secretary Armida Salsiah Alisjahbana told reporters in a teleconference that while four or five countries in the region were “quite okay” in their COVID-19 preparedness, health expenditures for some countries were “too low compared to the level that is required”.

Indonesia, Brunei, Malaysia, Thailand, Timor Leste and Laos had low health expenditure as a proportion of their GDPs in 2016, according to an assessment adapted from the Human Development Index (HDI) in the report.

The report showed that some countries had a lack of physicians, nurses and midwives, as well as hospital beds, among other indicators.

But Armida noted that almost all of the region’s countries had seen high levels of connectivity through mobile phone service subscriptions, although only a handful of countries had sufficient levels of fixed broadband.

“The usual indicators before this pandemic were human development-related measures and, of course, health. But with the pandemic, connectivity has come to the fore and is crucial,” Armida said.

Some 55 percent of Southeast Asia’s population remains without internet access, according to a Unescap statement late last month.

In Indonesia, the digital divide has impeded the government’s COVID-19 social assistance programs, which rely heavily on online platforms to deliver relief to those in need.

The report urges the region to address rising inequalities in its plans for recovery by employing short-term stimulus measures, long-term policy changes and by bridging the digital divide, among other measures.

But Griffith University epidemiologist Dicky Budiman argued that the countries with high health system rankings in the survey – with a high number of hospital beds and health workers – were not necessarily more successful in their responses to the pandemic.

He underscored leadership and quick and accurate responses to the pandemic as indicators of success, citing Angela Merkel of Germany and Jacinda Ardern of New Zealand as examples.

He also noted that there were gaps in testing capacity between countries like Singapore, Thailand, Vietnam and Malaysia and other Southeast Asian countries. Despite such limitations, countries had to work mostly alone to tackle the pandemic, he said.

“Now is the time not only to end this pandemic on a local scale but also on a regional one,” he said. “Don’t let any country choose the wrong strategy.”

Amid calls for more regional cooperation, Foreign Ministry director-general of ASEAN affairs Jose Tavares told The Jakarta Post that Asean was exploring a number of initiatives to curb COVID-19 regionally.

He noted that Indonesia had formulated the Asean Standard Operating Procedures for public health emergencies, had coordinated cross-border public health responses, had established a COVID-19 Asean response fund and had aided with regional reserves of medical supplies, among others initiatives.

In a press briefing on Thursday, Foreign Minister Retno Marsudi hinted at the passage of another Asean COVID-19 initiative.

“In regard to the Asean travel corridor proposed by Indonesia, as of now it is still being finalized and discussed among Asean countries,” she said.

Indonesia proposed the plan during an Asean summit in June, seeking to increase the region’s connectivity and facilitate the economic recovery from the COVID-19 pandemic.