PAG-ASA ISLAND, West Philippine Sea—Chinese ships in their line of vision have become part of the daily life of Filipinos who call this speck of land smack in the middle of the South China Sea home.

The island’s name means “hope” in the native tongue, and it shelters some 100 Filipinos on the front line of a potentially dangerous international maritime dispute. 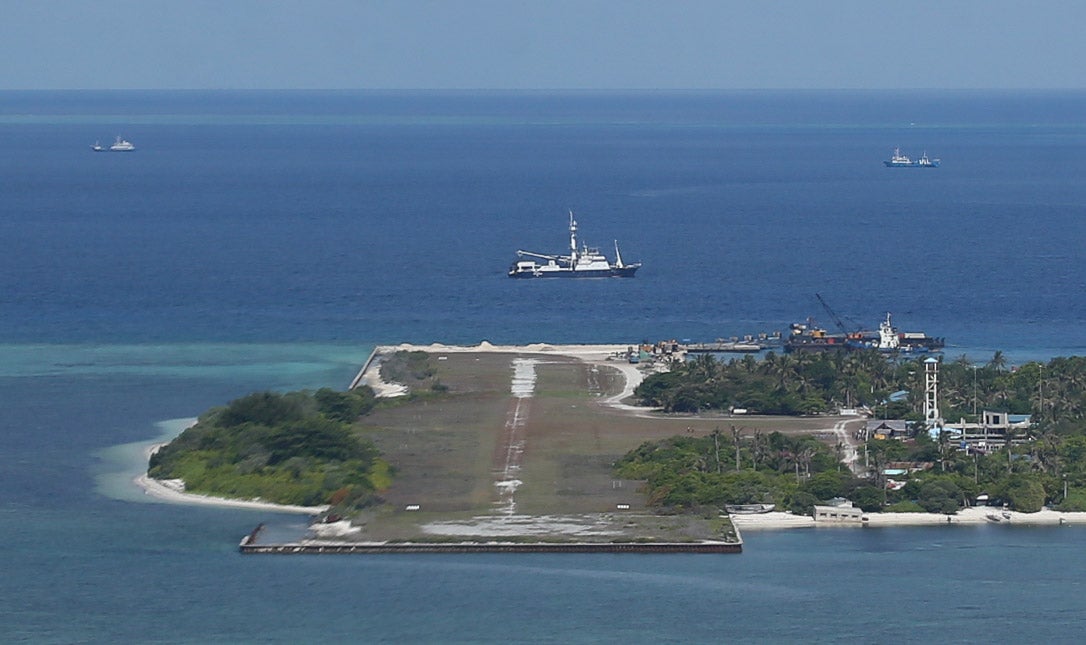 The Philippine government has just concluded two important rehabilitation projects on Pag-asa: a beaching ramp (overseen by the Department of National Defense) that was inaugurated on June 9, and a sheltered port (supervised by the Department of Transportation) that is to be turned over to the local government today, Independence Day.

On May 28, the Inquirer joined government officials in a Philippine Air Force C-130 plane on a visit to Pag-asa. After the plane landed, at least five Chinese vessels believed to be part of a maritime militia and a China Coast Guard ship moved from its position at the edge of the western portion of the runway but still stayed relatively close. The Inquirer was told that the nearest Chinese vessel was 7.4 kilometers (4 nautical miles) away. 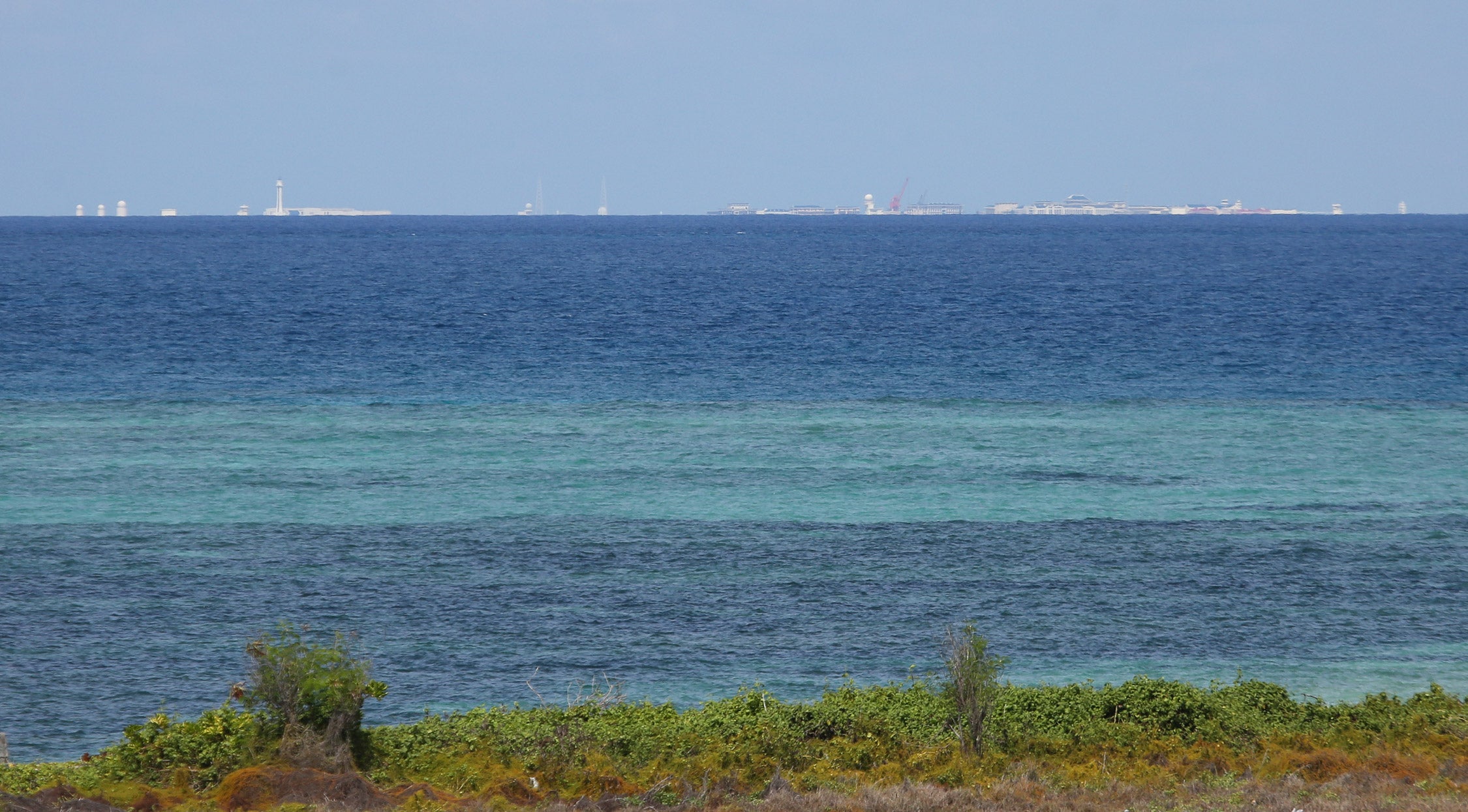 Beyond the horizon 22.5 kilometers (14 miles) southwest of the island lies a mini city with tall buildings quite visible even from afar. Zamora Reef, internationally known as Subi Reef, is now a massive military outpost that China built at a remarkable speed a few years back.

Pag-asa’s mighty neighbor claims almost the entire resource-rich South China Sea as its territory, and is accused of fueling tensions and escalating aggression amid the new coronavirus disease (Covid-19) pandemic.

But the island’s residents try to live as normally as they can, banishing worries that conflict may break out one day.

Forty-seven families and a small military contingent live on this island internationally known as Thitu, not only because it is now home to them but also to assert Philippine sovereignty over it. 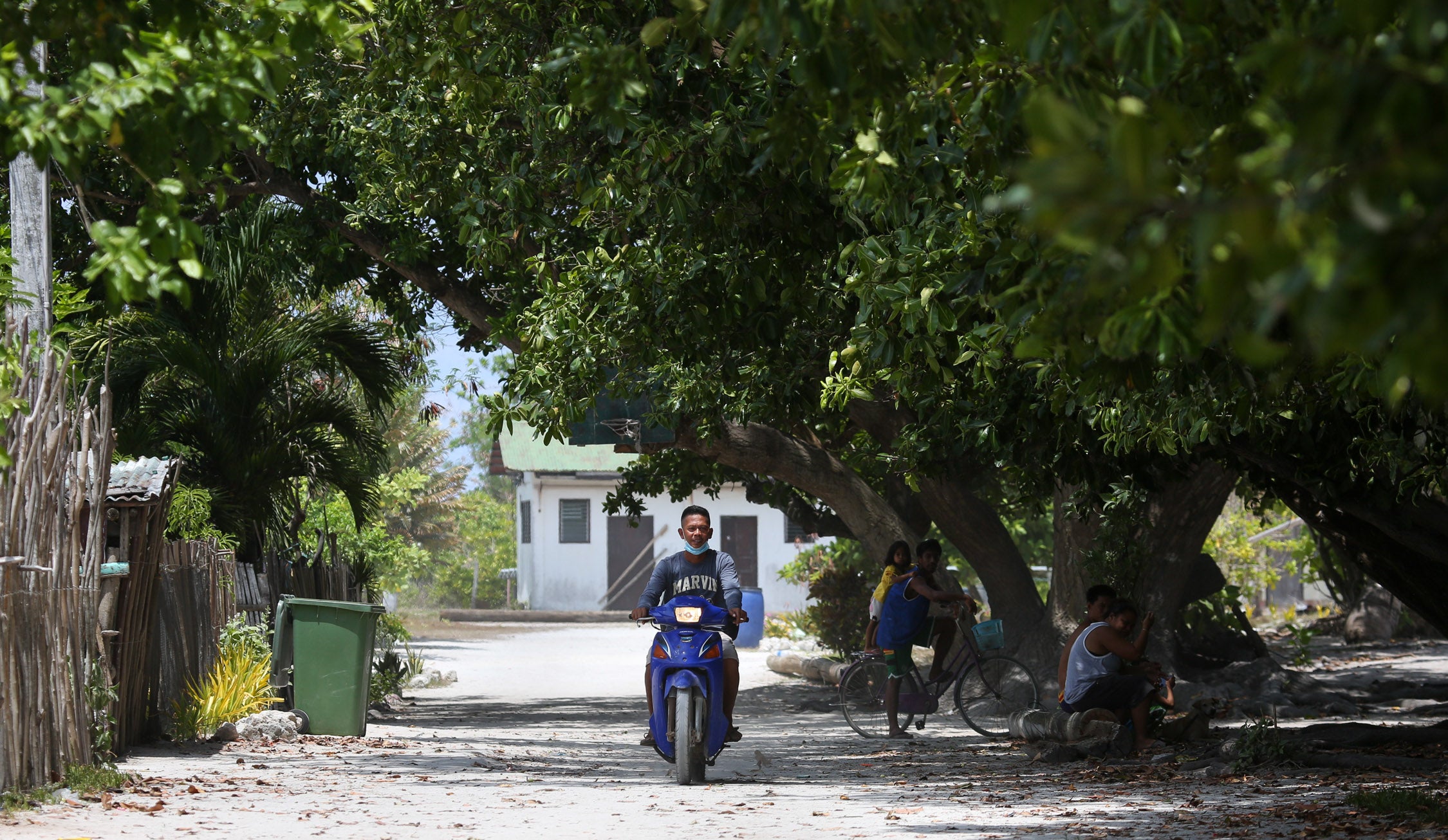 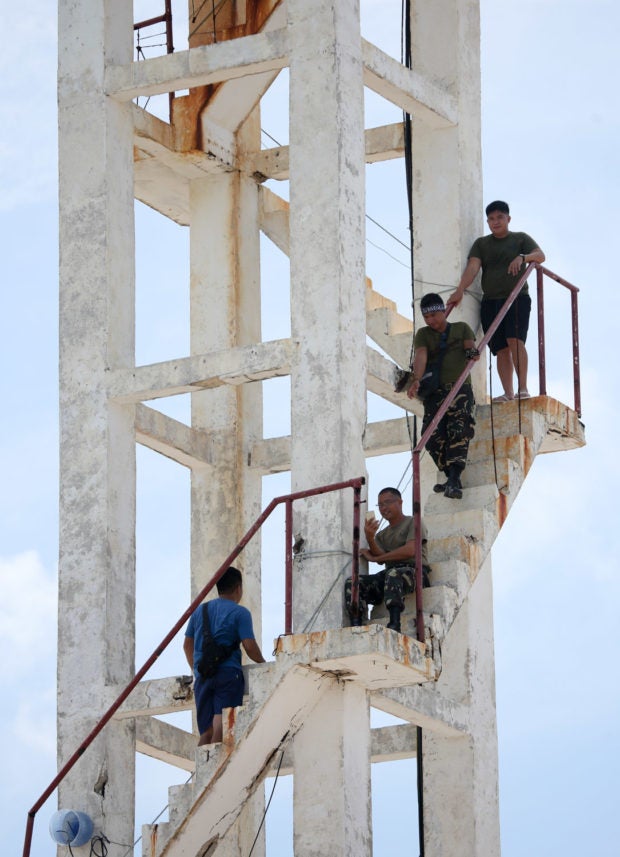 Pag-asa is the seat of power of Palawan province’s municipality of Kalayaan that was established in the late 1970s to assert the Philippines’ claim to the Spratlys, an archipelago of more than 700 reefs, islets and atolls in the South China Sea.

“Sometimes we think we would be attacked,” said Arzel Deliban, a resident and municipal government employee of 11 years, speaking in Filipino. “But there are many soldiers here. It’s impossible that it won’t reach the higher-ups.”

A small number of soldiers from the Philippine Navy and Air Force are deployed here on rotation every three to six months. 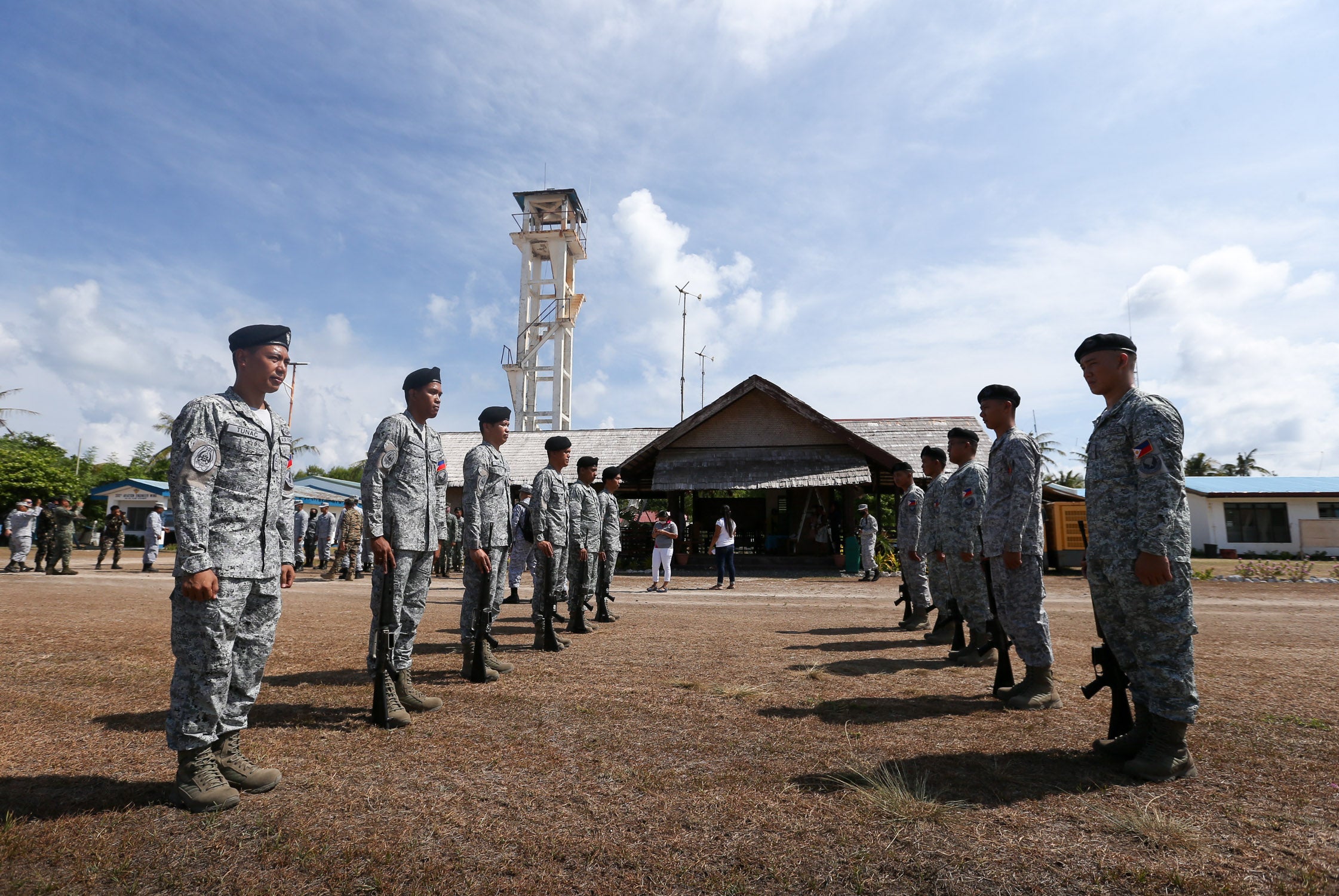 The constant presence of Chinese trawlers in the area was the subject of diplomatic protests by the Philippine government in the past year. But they never went away completely.

The civilian nature of the vessels, said to be controlled by the Chinese government, makes it difficult for any South China Sea claimant to take China to task directly. Analysts say Beijing uses these supposed militia vessels to pursue its objectives short of conventional war.

When the Chinese vessels get too close, the Philippine military or Coast Guard wards them off, the residents said. 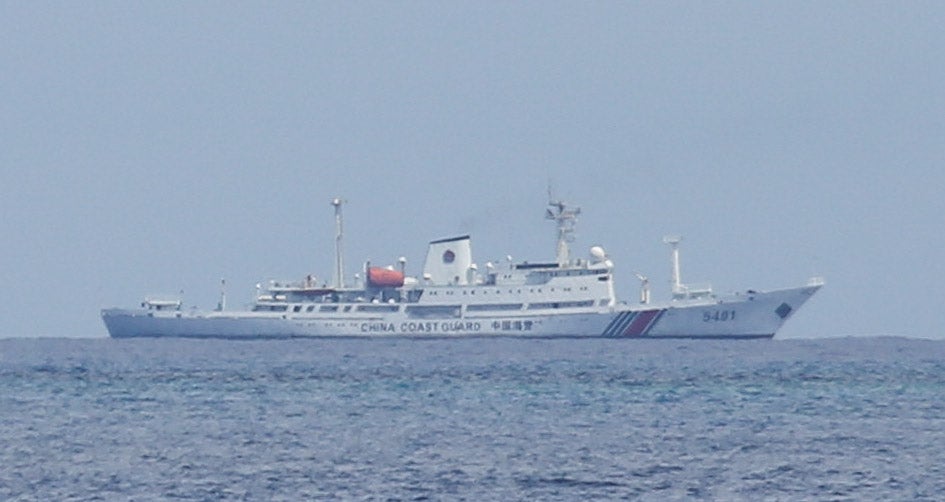 Deliban, who goes fishing when he is not doing office work, said the Chinese vessels used to sound their horns whenever Filipino fishermen approached the sandbars near Pag-asa. But things have changed.

Last year, Filipinos fishing at a sandbar called Secret Island were constantly honked at. “Now there’s no honking. Even if we fish here, they don’t honk anymore,” he said.

At night, the Chinese vessels are brightly lit, Deliban said. “In the afternoon, they begin to disperse and circle the island. We’ve gotten used to that already.”According to Eugenio Bito-onon Jr., a former mayor of Kalayaan who now lives in Puerto Princesa City in Palawan, sightings of Chinese vessels off the island have become “normal.”

“I doubt that China’s militia would disappear,” he said in Filipino. “The man-made island Subi Reef is too big. That means it’s normal every day to see many Chinese fishing boats, including their militia and coast guard, anchoring near Pag-asa.”

Bito-onon said there were no such ship sightings before the “reclamation.”

The number of vessels varies daily, but they have rarely disappeared since 2018, when the Philippine government began rehabilitation work on Pag-asa. Early this year, as many as 76 vessels were spotted near Pag-asa on a single day.

READ: Chinese maritime militia: What can the Philippines do? 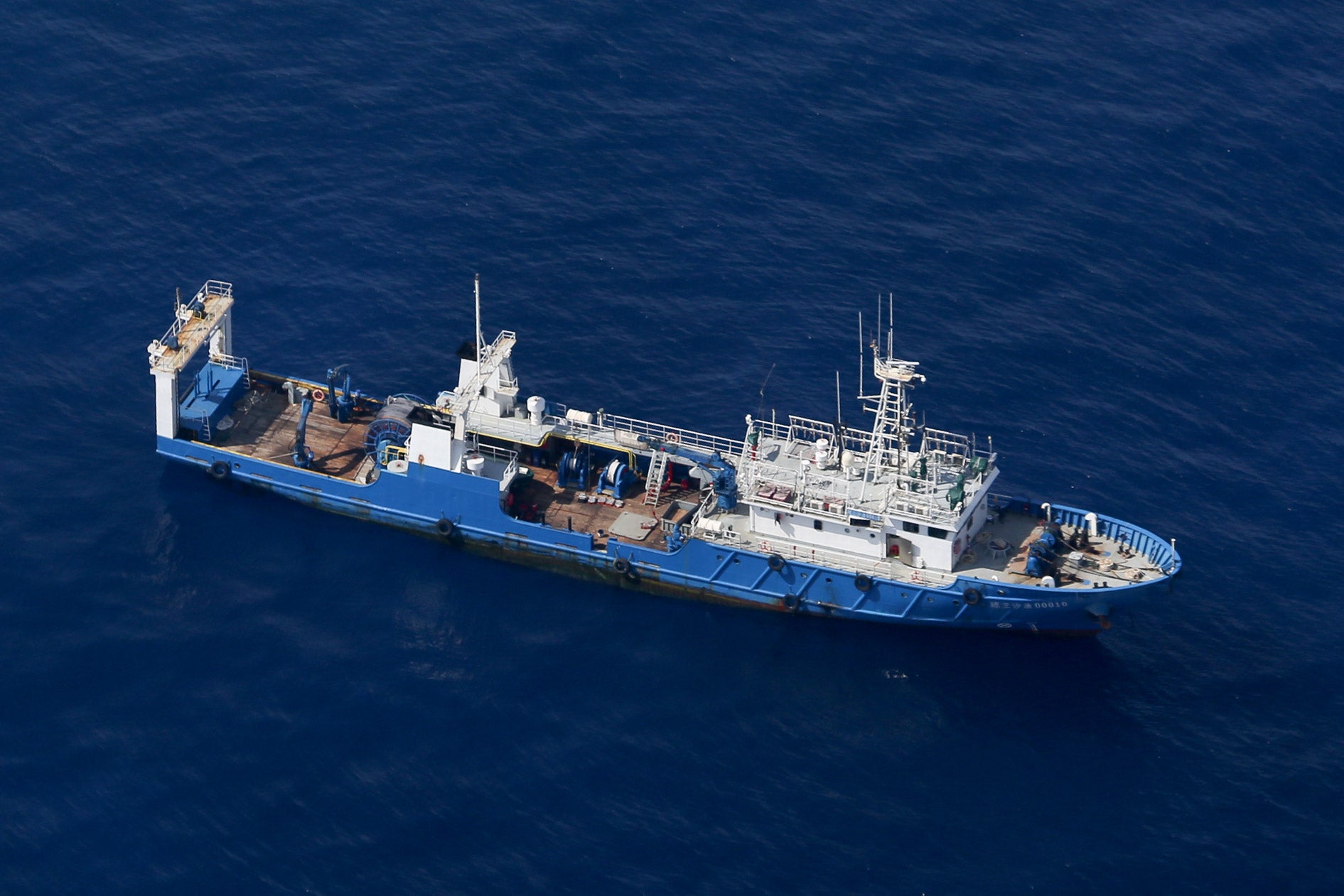 A Chinese vessel suspected to be part of maritime militia as seen from PAF C-130T aircraft 5040 on May 28, 2020. INQUIRER PHOTO/LYN RILLON

On the other hand, said Lt. Cmdr. Manuel Zapanta, Pag-asa Island commander, the number of Chinese vessels near the island has dwindled in recent weeks. But he was unsure if it would be for the good.

Maritime expert Jay Batongbacal of the University of the Philippines’ Institute for Maritime Affairs and the Law of the Sea warned against the residents’ apparent acceptance of the presence of Chinese vessels as part of a new reality.

“That’s complacency setting in—accepting the situation as normal and letting their guard down. Worst-case scenario is they (Chinese) will suddenly land and take over the place without a shot. It’s possible. It’s like counterinsurgency warfare,” Batongbacal said.

Defense Secretary Delfin Lorenzana said that while the locals had come to regard the Chinese vessels as a permanent fixture, he himself believed that action should still be taken, at least through diplomatic channels.

“If they come near our islands, we protest. But remember that Subi Reef, the Chinese-built island from reefs, is just 14 miles (22.5 km) away. Midway is 7 miles (11 km). Anything closer and we protest,” Lorenzana said.

The 37-hectare Pag-asa is more than 400 km from the mainland and is the only one of the nine islands and reefs occupied by the Philippines in the Spratlys that has civilian dwellers. The rest are manned by the military. 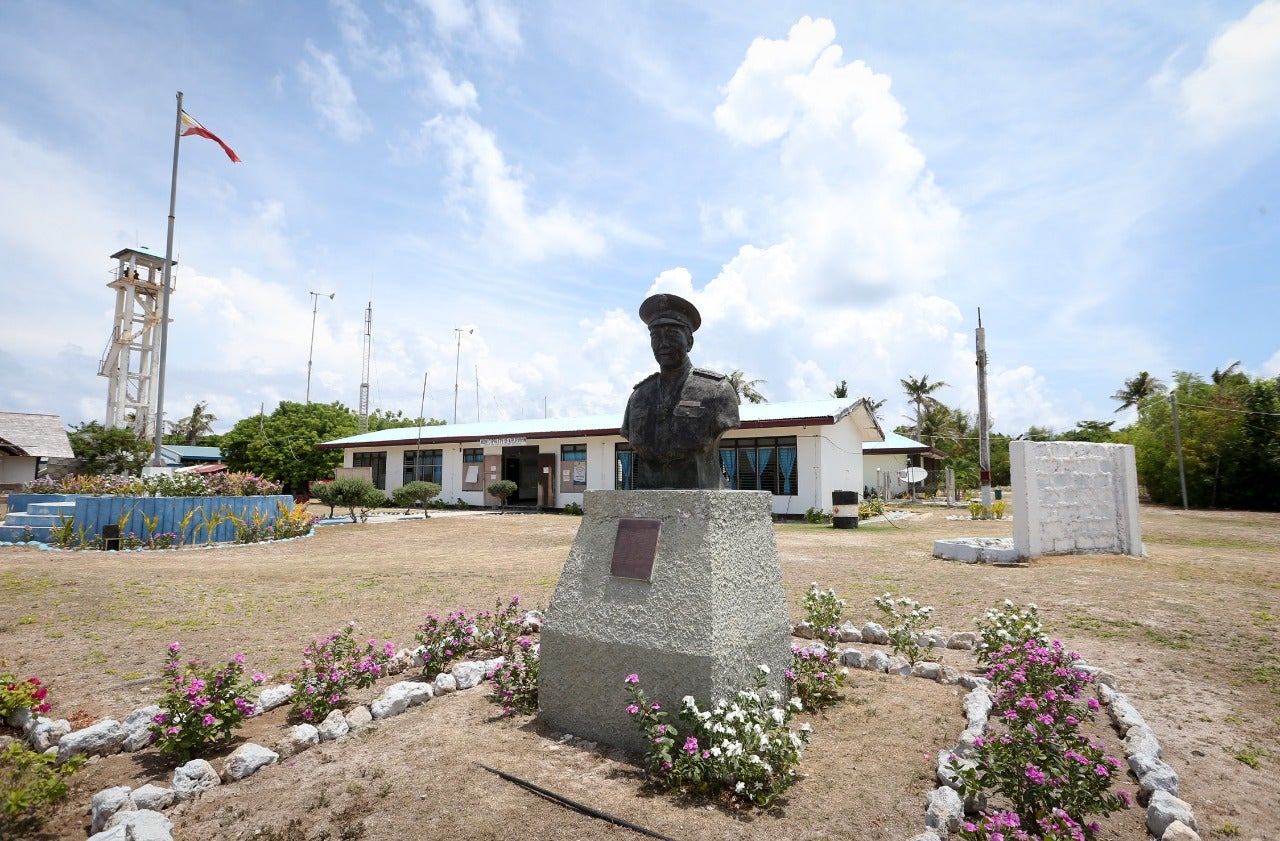 For the government, the presence of civilians is an exercise of sovereignty. But for the settlers, it is a matter of their own survival.

Marilou Asiado, a mother of two, moved to Pag-asa five years ago with her family. “My husband’s elder brother said we should try coming here,” she said. “There’s no job shortage, even in construction.” 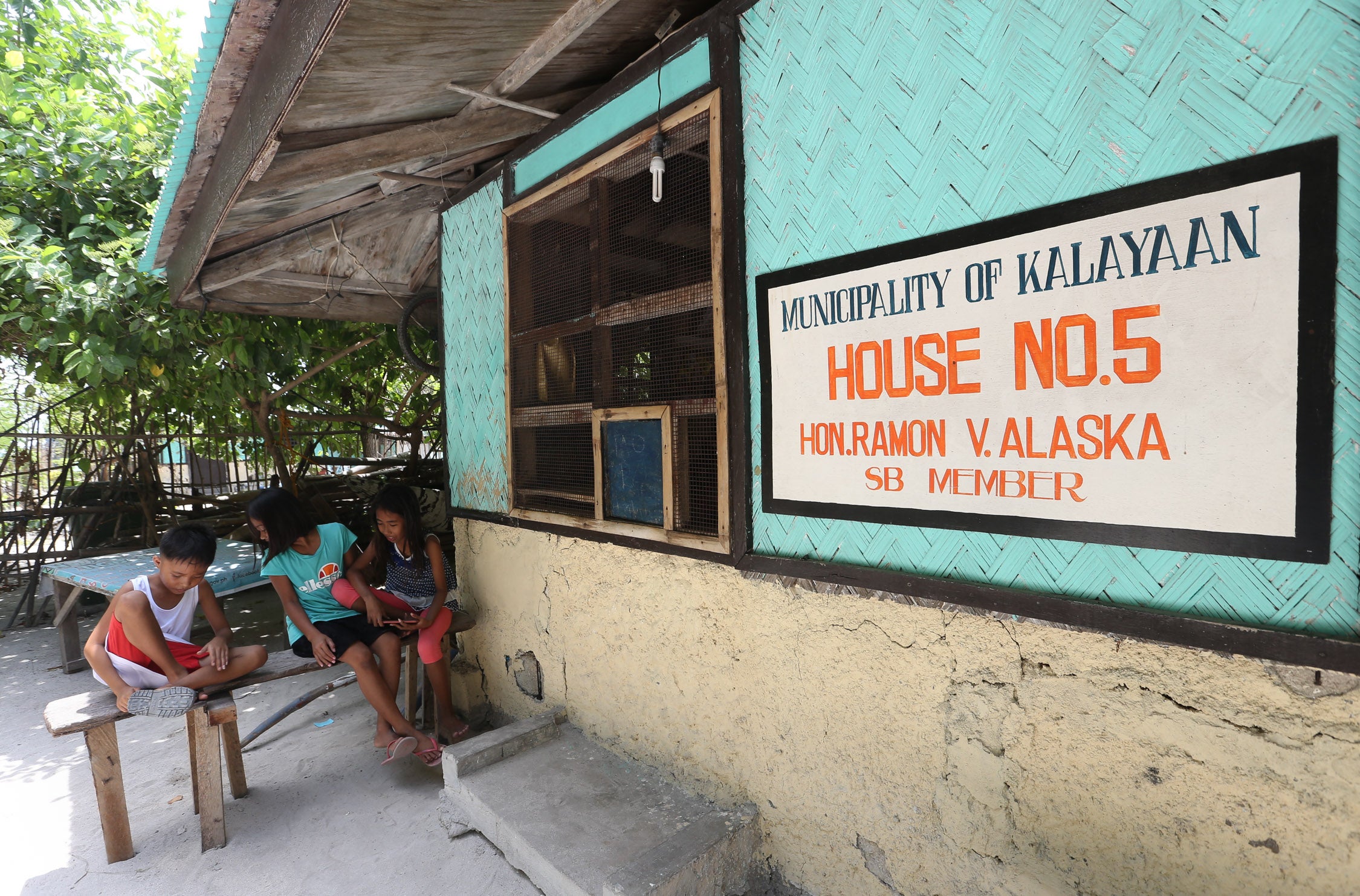 All the residents, like Asiado, get free food and housing from the government. They live in small bungalows built from light materials or concrete. Some families have their own private dwellings; some (up to three households) share a house.Couples have three children on the average.

The free supplies shipped from the mainland every quarter comprise nearly 30 kilograms of rice, condiments and canned goods. These are complemented by a municipal store that offers basic necessities, the costs of which the residents can cover or get deducted from their pay.

The residents are encouraged to do backyard vegetable gardening using garden soil from the mainland. They may also go fishing for their own consumption or livelihood.

They use wood or charcoal from the mainland for cooking.

Unlike its neighbors, Pag-asa has trees and fresh water that can support human life. There is a filtration facility that provides clean drinking water for its residents.The island has a longtime zero crime rate, although two cops are stationed on the island to keep the peace.

Asiado said she did not regret her decision to move to Pag-asa because it eased a financial burden that made life on the mainland difficult. In fact, she has not left Pag-asa since 2018, even if ships owned by the municipality regularly come by to transport residents to and from the island. During summer, ships sometimes come every two weeks, with the frequency dropping when the rains come.

Hugo, meanwhile, recently spent three months on the mainland before heading back to Pag-asa. She said residents like herself could choose how long they wanted to be away.

Life is simple and quiet on Pag-asa and options for communication and recreation are limited.

Without free wireless internet, communication with the outside world is difficult and costly. At the time of the Inquirer’s visit, there was no local mobile signal available on the island. 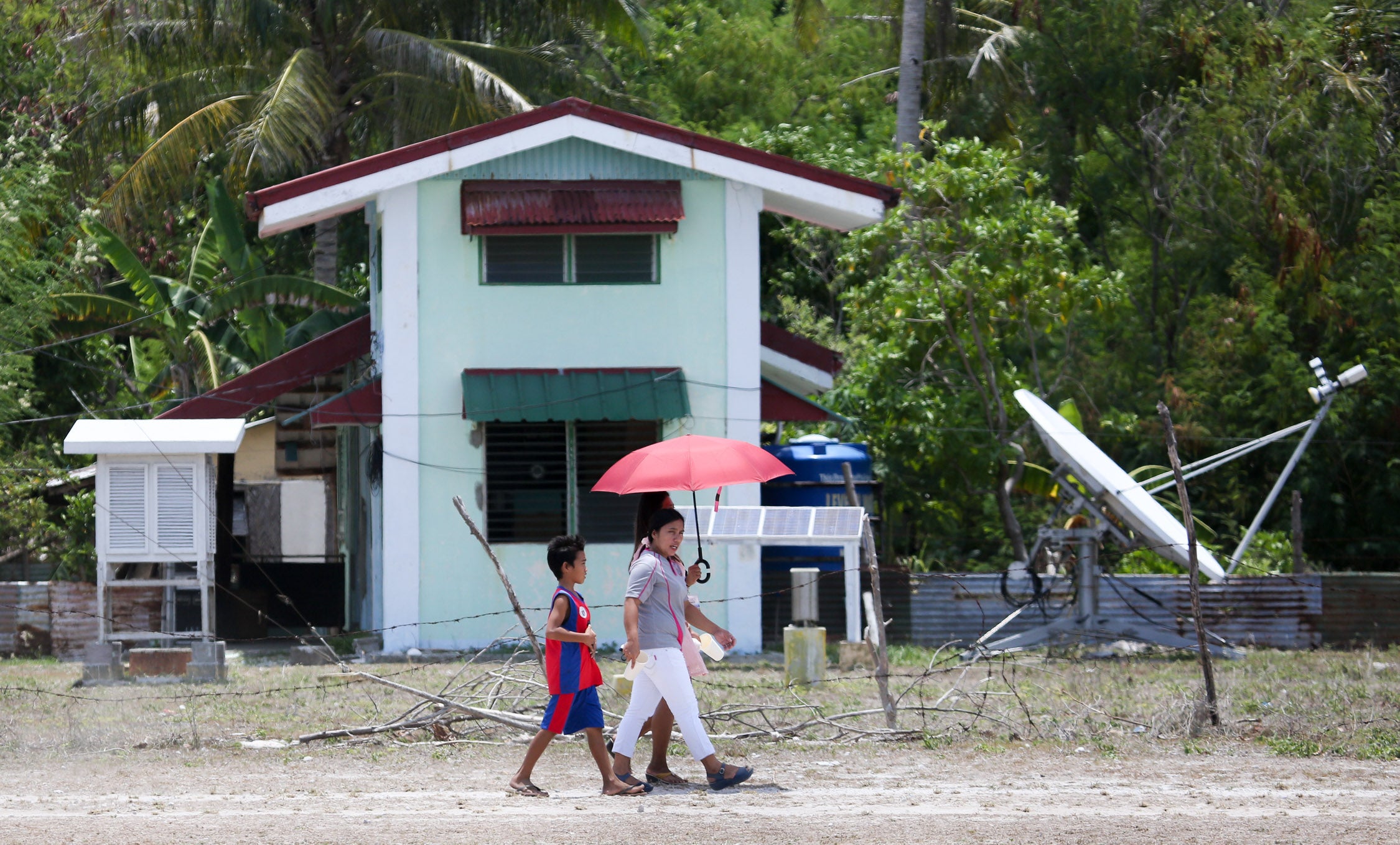 The residents said they sometimes relied on satellite signal, which was considered a luxury; other times, they depended on their foreign neighbors’ mobile networks.

Shortly before the C-130 plane touched down on Pag-asa, the Inquirer received two generic welcome text messages for mobile and data roaming—a seeming subtle reminder of the overlapping territorial claims among neighboring countries. Part of the first message read: “Welcome to China!” The next message said: “Welcome to Vietnam!” 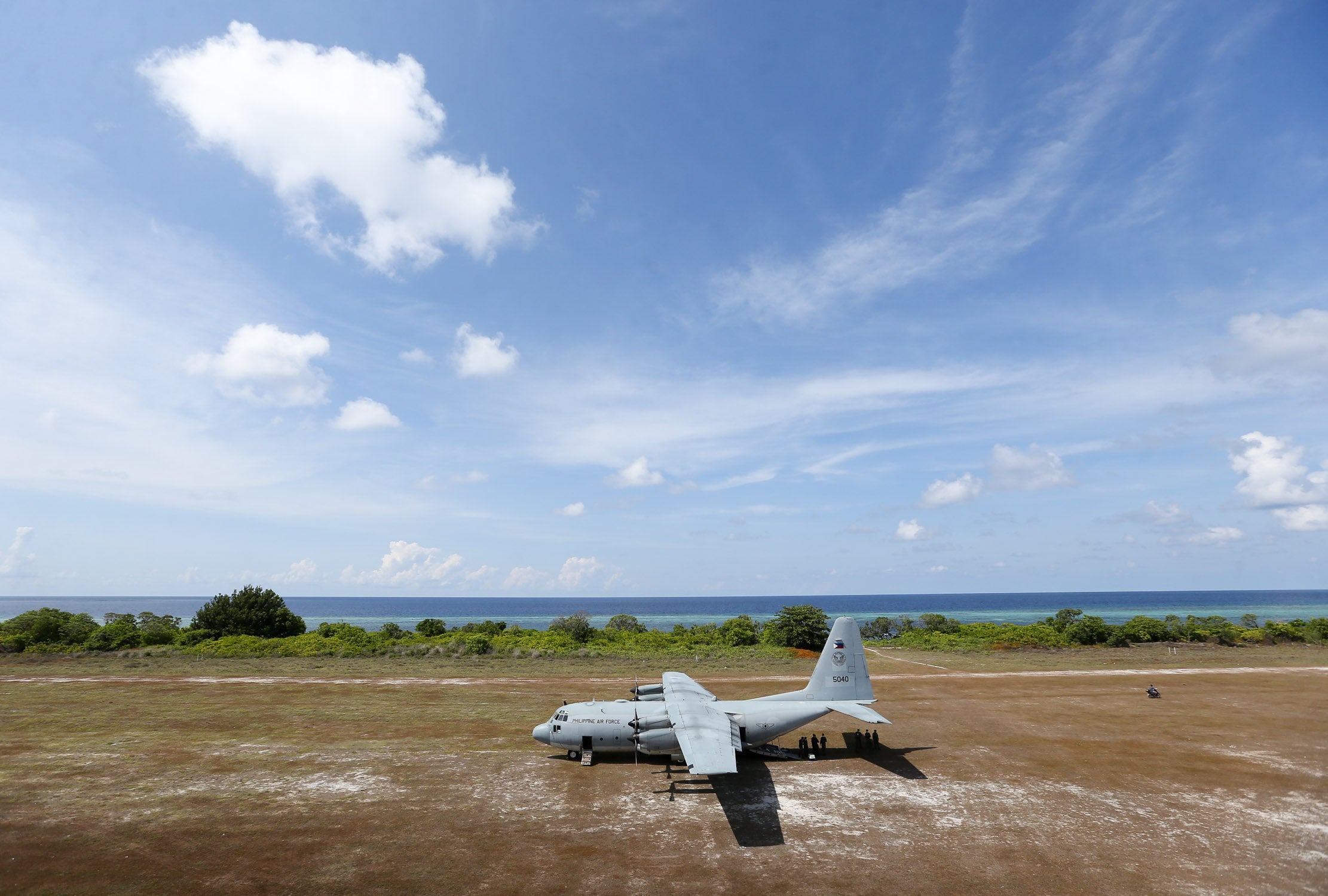 A Philippine Air Force C-130 lands on Pag-asa on ay 28, bringing Navy and defense officials along with Inquirer journalists for an inspection of major infrastructure projects on the island. INQUIRER PHOTO/ LYN RILLON

Free Wi-Fi was only made available on the island starting August 2019. Residents can avail themselves of cable TV if they can afford it. Electricity runs for only four hours a day.

The men mostly turn to sports, like basketball, or go fishing to keep themselves busy when they are not at work. 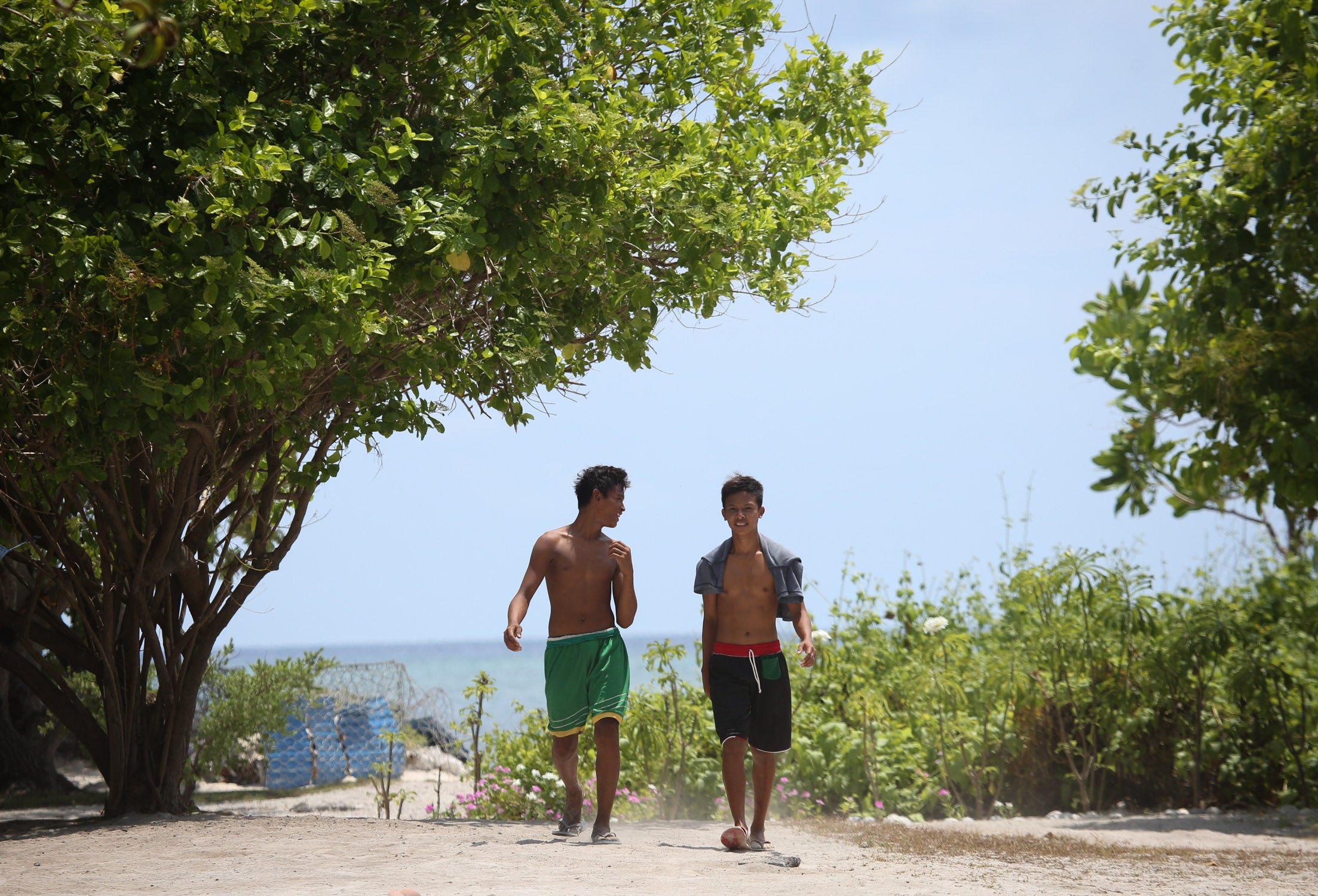 A small school for children was built in 2012—a move that China protested for being a supposed affront to its territorial claims. The school is for students from kindergarten to sixth grade. To continue their studies, graduates have to go to the mainland.

There are no more than 30 students being tended to by two multigrade teachers. As in the rest of the nation, classes have been on hold because of the new coronavirus—even if there is no recorded case of Covid-19 here.

The settlers spend their idle time hanging out with their neighbors, playing music, or attending each other’s small birthday celebrations. Swimming is also an option.

Boredom and isolation pose a huge challenge, but for Hugo, “if your entire family is here, it’s not difficult at all.”

“But if you’re single, maybe you’ll get bored. It’s normal,” she said.

Most days are monotonous and calm, and the future is uncertain on this tropical island that is hardly paradise. But its residents appear undaunted: Hope is what keeps them going.

The beaching ramp and the sheltered port, the first major infrastructure on Pag-asa in decades, are seen to drastically change the way of life of both the residents and the troops. 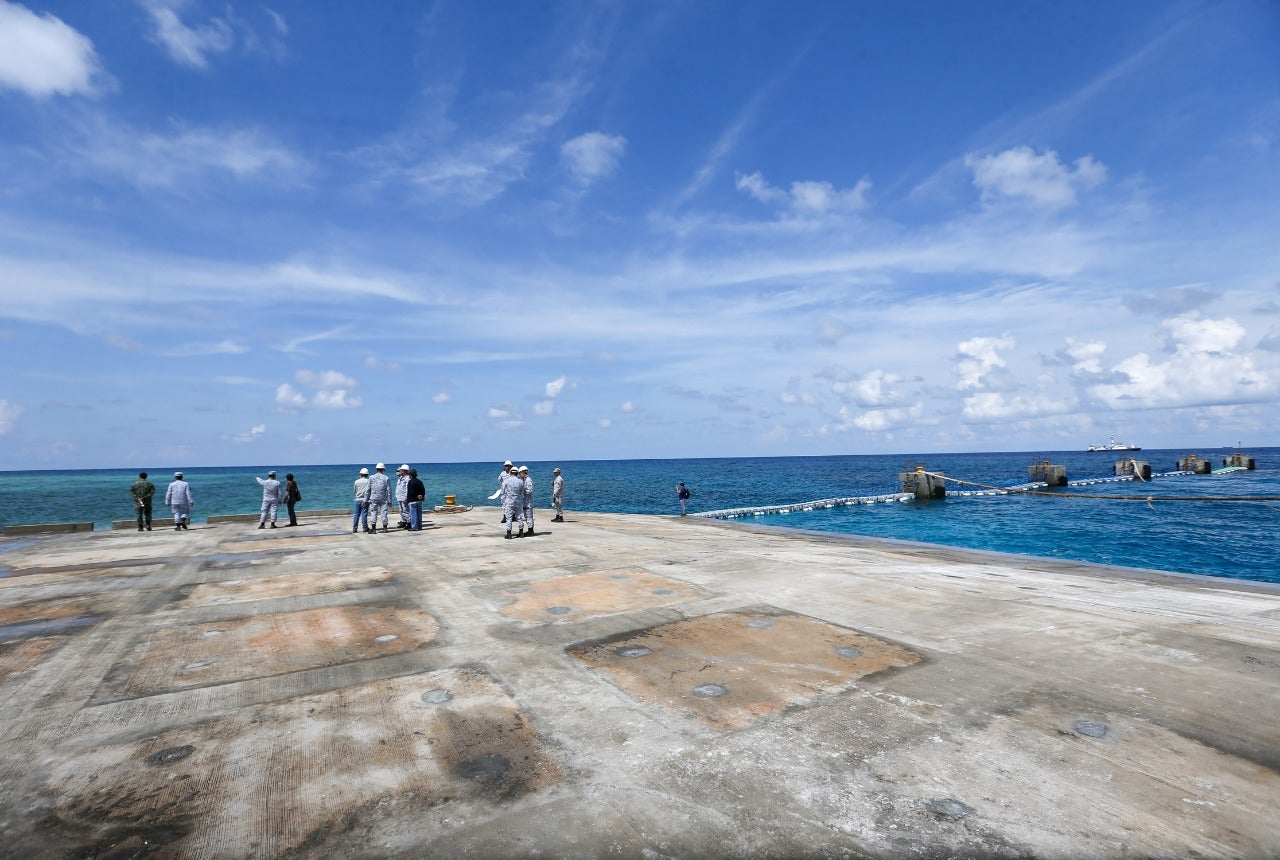 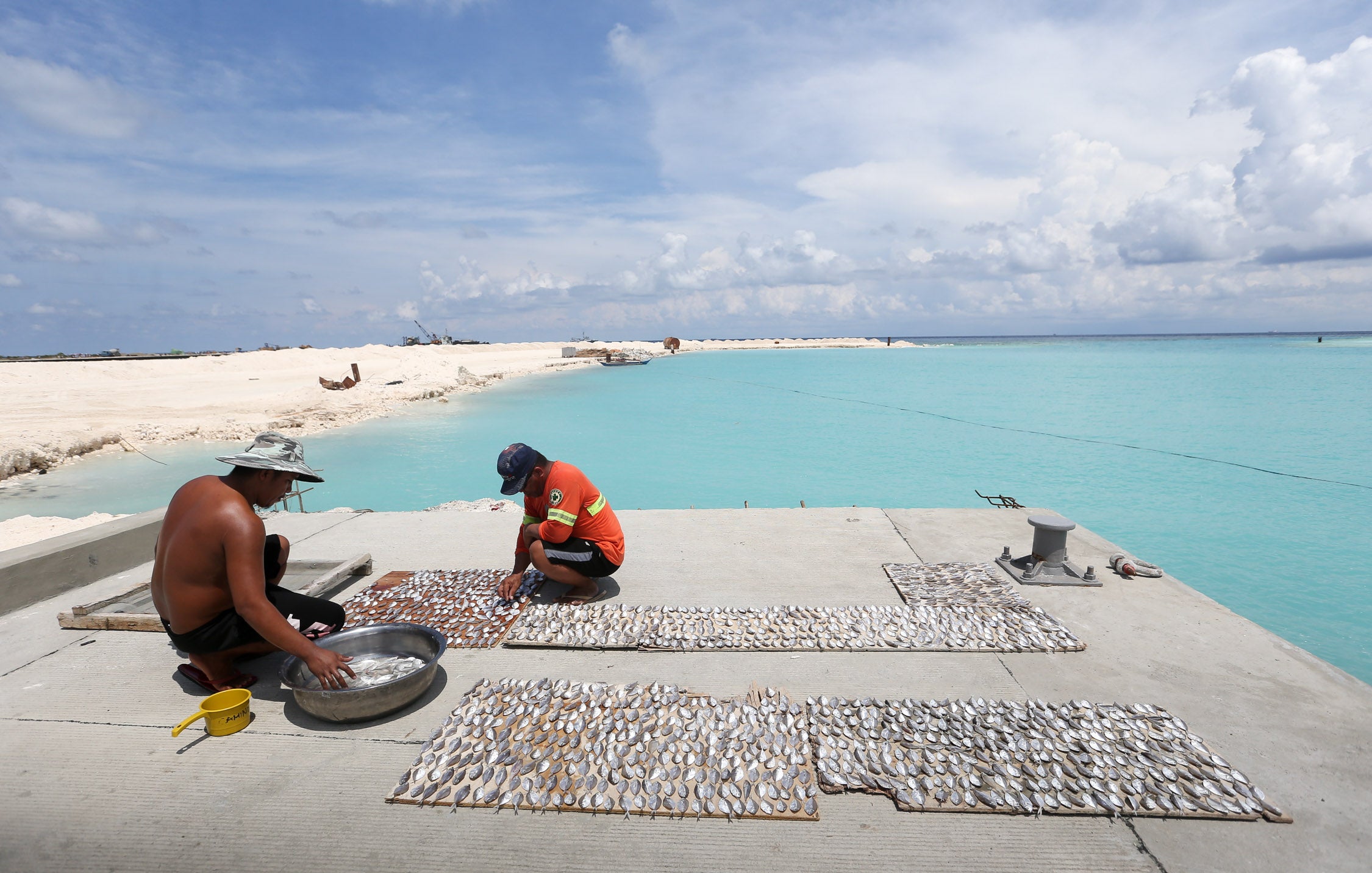 Kalayaan Mayor Roberto del Mundo said China or other claimants had so far not interfered with the municipality’s development plans. “We don’t think about the danger anymore.

Our projects just continue,” said Del Mundo, who holds office in Puerto Princesa but travels to the island when necessary.

With the rehabilitation projects, the municipality can now proceed with tourism and development plans that should have been carried out long ago but were difficult to implement because of the absence of a harbor, the mayor said.

This week, construction materials to be used for paving the roads are expected to be transported to Pag-asa.