Pag-asa gets upgrade amid China objection

PAG-ASA ISLAND, West Philippine Sea—Beijing had tried to stop it, but a long-imagined development plan in the biggest and most strategically important Philippine-held island in the disputed Spratlys is finally taking shape.

As the Philippine Air Force C-130 plane approached Pag-asa Island, it flew past the western tip of the crumbling runway to allow its passengers—defense and military officials as well as journalists—an aerial view of the ongoing major development projects. 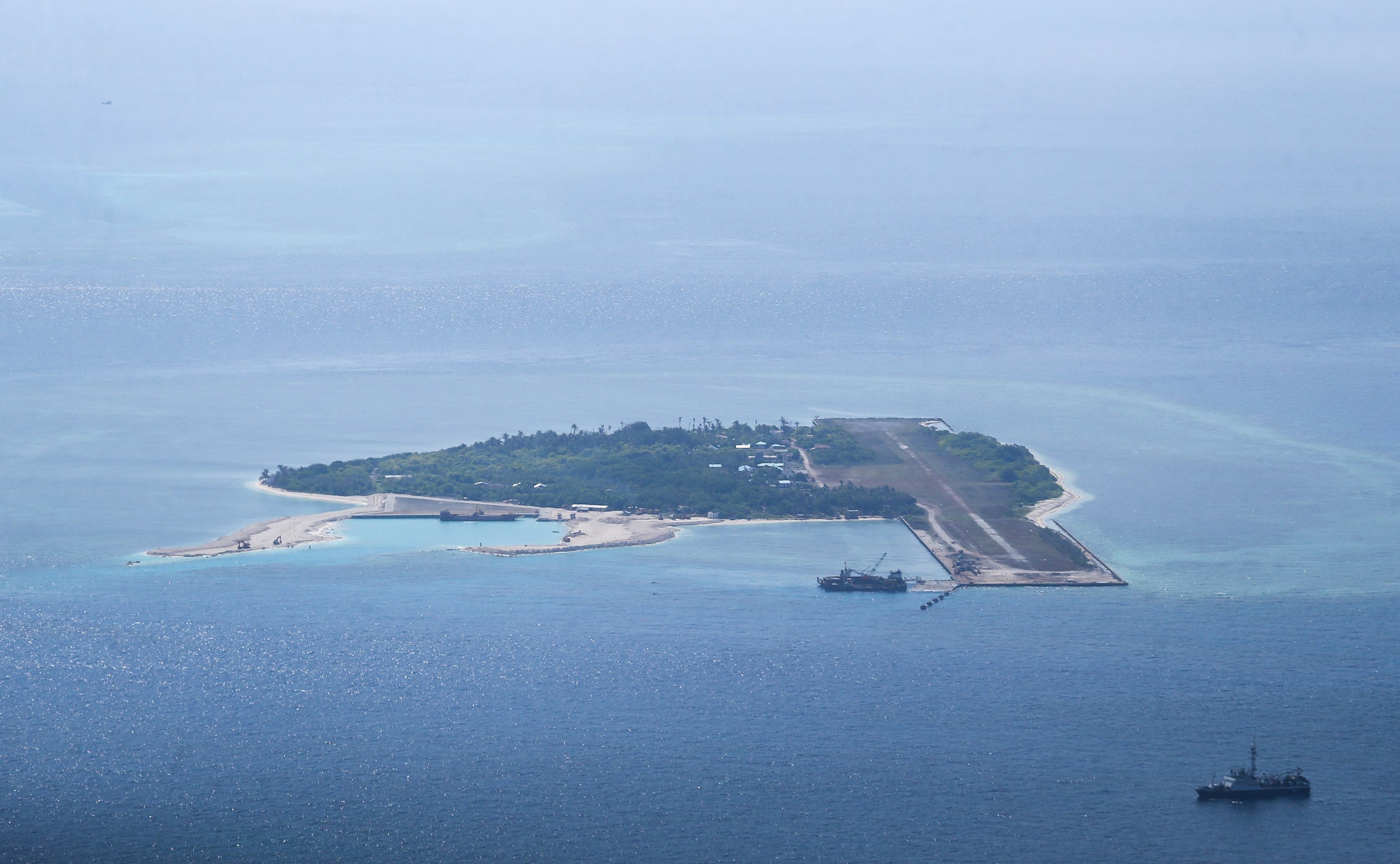 It was May 28 on Pag-asa (“hope” in Filipino). The government officials were visiting the island to inspect a new beaching ramp ahead of its inauguration on June 9. They carefully surveyed the ramp, a project overseen by the Department of National Defense, in the scorching summer heat, and appeared to be proud and satisfied with the results. 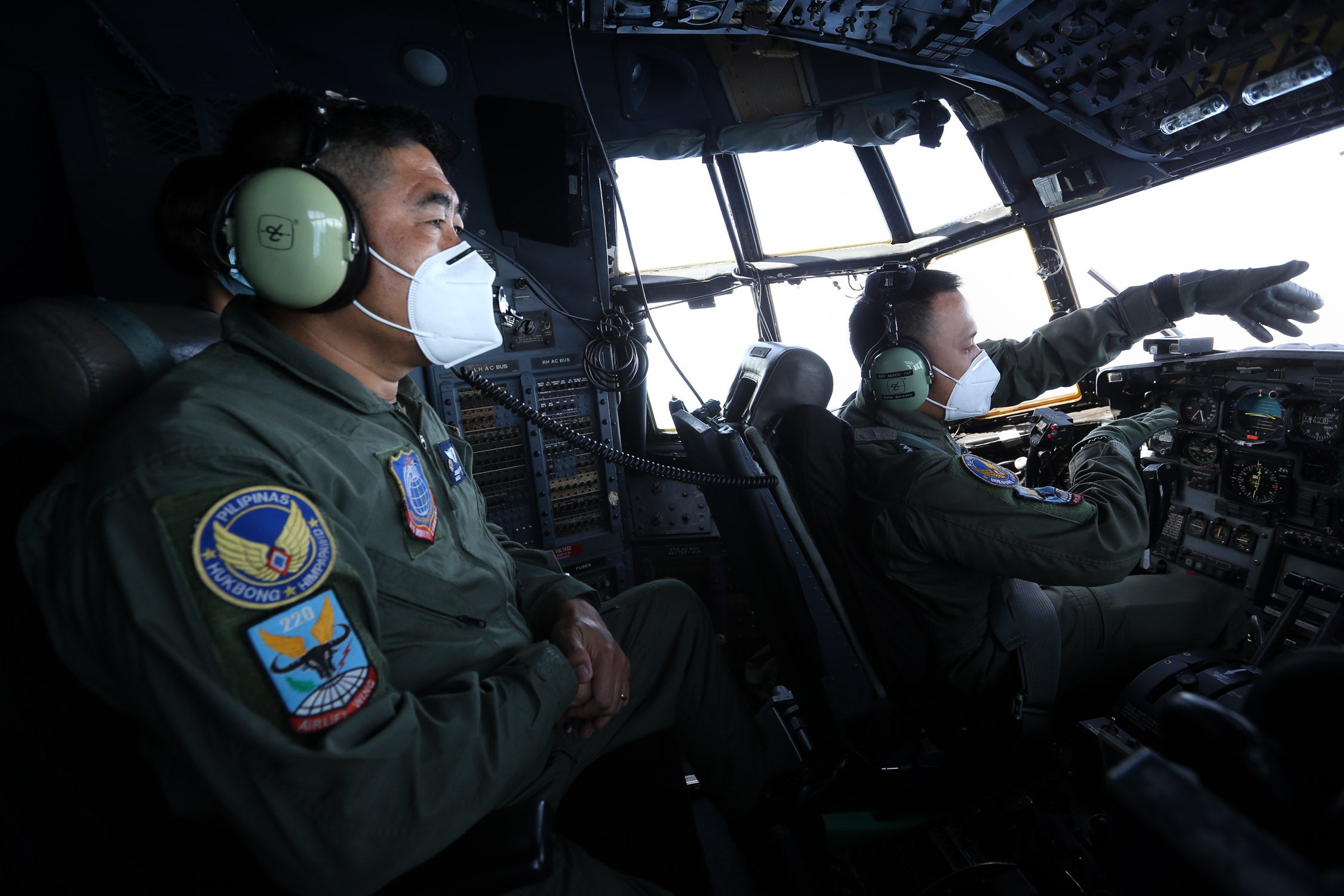 Philippine Air Force takes defense and military officials on a trip to Pag-asa Island on May 28 for the technical inspection of the beaching ramp. (LYN RILLON)

Yesterday, Independence Day, was equally momentous: A sheltered port, a separate project of the Department of Transportation, was turned over to the municipality of Kalayaan, which includes Pag-asa.

The significance of the handover was not lost on Kalayaan officials, occurring as it did on the day that celebrates Philippine sovereignty. The new structures were also seen to provide hope to the settlers and troops who have had to endure difficult living conditions on the island. SHELTERED PORT. Another major project recently completed on Pag-asa, aside from the beaching ramp. (LYN RILLON)

For decades, those traveling to and from Pag-asa by ship had to take a small boat because of the absence of a pier. Not anymore.

The beaching ramp will also allow the smooth transport of heavy construction materials to repair the island’s runway and rehabilitate other facilities. The sheltered port will serve as a safe harbor for visiting civilian and government vessels, especially during bad weather.

Pag-asa, internationally known as Thitu, is the only Philippine-controlled outpost in the Spratlys that has civilian inhabitants. The other eight islands and reefs are guarded by the military.

The Philippines did not undertake any major upgrade on Pag-asa for many years to avoid upsetting its neighbors, each with claims to portions of the South China Sea. The repair of the runway was put on hold during the term of President Benigno Aquino III pending the outcome of the Philippines’ case against China at the Permanent Court of Arbitration in the Netherlands. 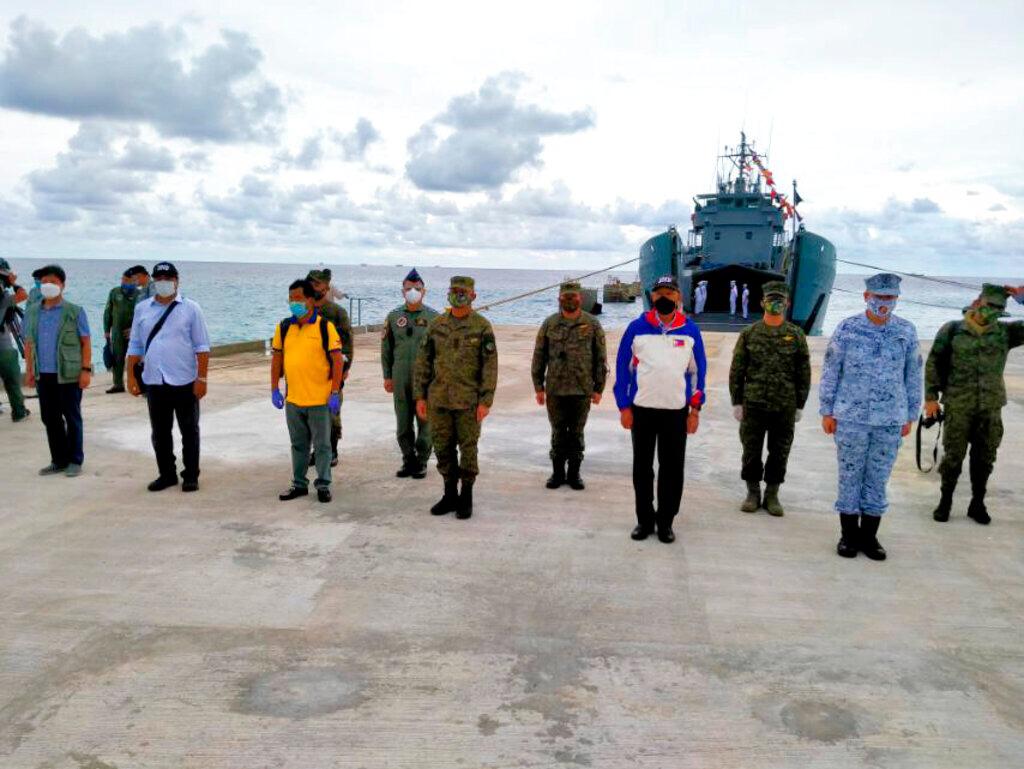 Defense Secretary Delfin Lorenzana, 4th from right, stands with other military and local officials during a short ceremony at the newly built beach rampway at the Philippine-claimed island of Pag-asa, also known as Thitu, in the disputed South China Sea on Tuesday June 9, 2020.(Department of National Defense PAS via AP)

The Philippines lodged the case in 2013 questioning China’s excessive claim over the South China Sea. In 2016, the United Nations-backed arbitral tribunal ruled that China’s claim on the strength of its “nine-dash line” had no basis.

China has yet to acknowledge the ruling and President Duterte, Aquino’s successor, maintains a friendly relationship with Beijing in exchange for economic assistance and investments.

But less than a year after the ruling was issued, the Philippine government decided to proceed with longtime plans to develop Pag-asa. It allocated a budget of P1.6 billion for the island’s rehabilitation and other upgrades.

“We’re being left behind. We are the last claimants here who are doing nothing to the islands we are occupying,” Defense Secretary Delfin Lorenzana said in April 2017 when he visited Pag-asa to inspect the facilities that needed improvement. 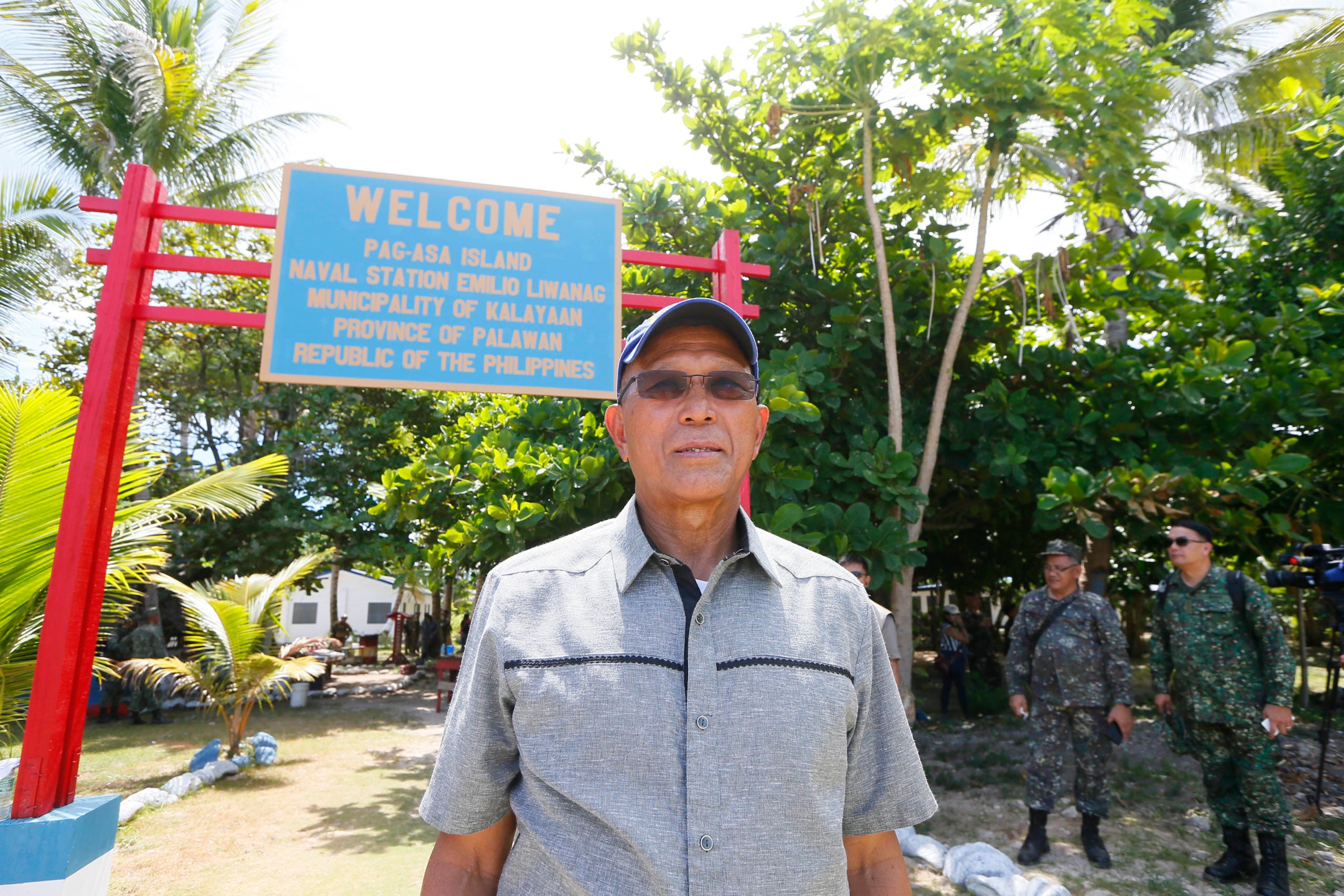 Philippine Defense Secretary Delfin Lorenzana tours the Philippine-claimed Pag-asa (Thitu) Island during his visit to the Spratlys Group of islands off the disputed South China Sea in western Philippines Friday, April 21, 2017. The visit Friday was aimed to assert the country’s claim to the heartland of a disputed area where China is believed to have added missiles on man-made islands.(Photo by BULLIT MARQUEZ / AP)

He said he also expected the Chinese government to protest the construction activities but that he did not see it as a reason to hold off on the government’s plans.

At a forum in November 2018, Lorenzana said China, the most aggressive claimant in the South China Sea, had tried to stop his visit and the Philippines’ planned upgrades on Pag-asa.

“When he learned that we are going to repair our runway on Pag-asa, he came to me and said, ‘No,’” the defense chief said, recalling his meeting with then Chinese Ambassador to Manila Zhao Jianhua.

“When he learned that I was going to Pag-asa, he came to me and tried to dissuade me from going there. He gave a lot of reasons. [He said] some countries might follow me to go to the islands. No defense secretary has gone there before, I would be the first to go, and we went there,” Lorenzana said.

As it happened, the Philippine government went ahead with the planned construction despite the attempts of the Chinese government to stop it. But what seemed a simple task of building a beaching ramp to jump-start the repair of the runway dragged on for about two years.

International security analysts believe that the presence of Chinese vessels around Pag-asa, suspected to be part of Beijing’s maritime militia, hampered the construction of the beaching ramp and sheltered port.

Lorenzana has denied this several times, saying that the vessels’ presence did not interfere with the rehabilitation of the island. Construction work did not begin until mid-2018, reportedly due to harsh weather conditions.

Sea waves are especially strong around the island during the southwest monsoon season, making it difficult to undertake construction or deliver heavy equipment.

Rey Sagum of Luzviminda Engineering Construction, the contractor of the P268-million beaching ramp, explained that the completion of the project was pushed back a few times due to bad weather.

The transport of construction materials, manpower, food and other supplies to the 37-hectare island located 480 kilometers west of Puerto Princesa City, Palawan, was a challenge, too. A few setbacks in building the ramp also forced a return to the drawing board for a revision of plans. 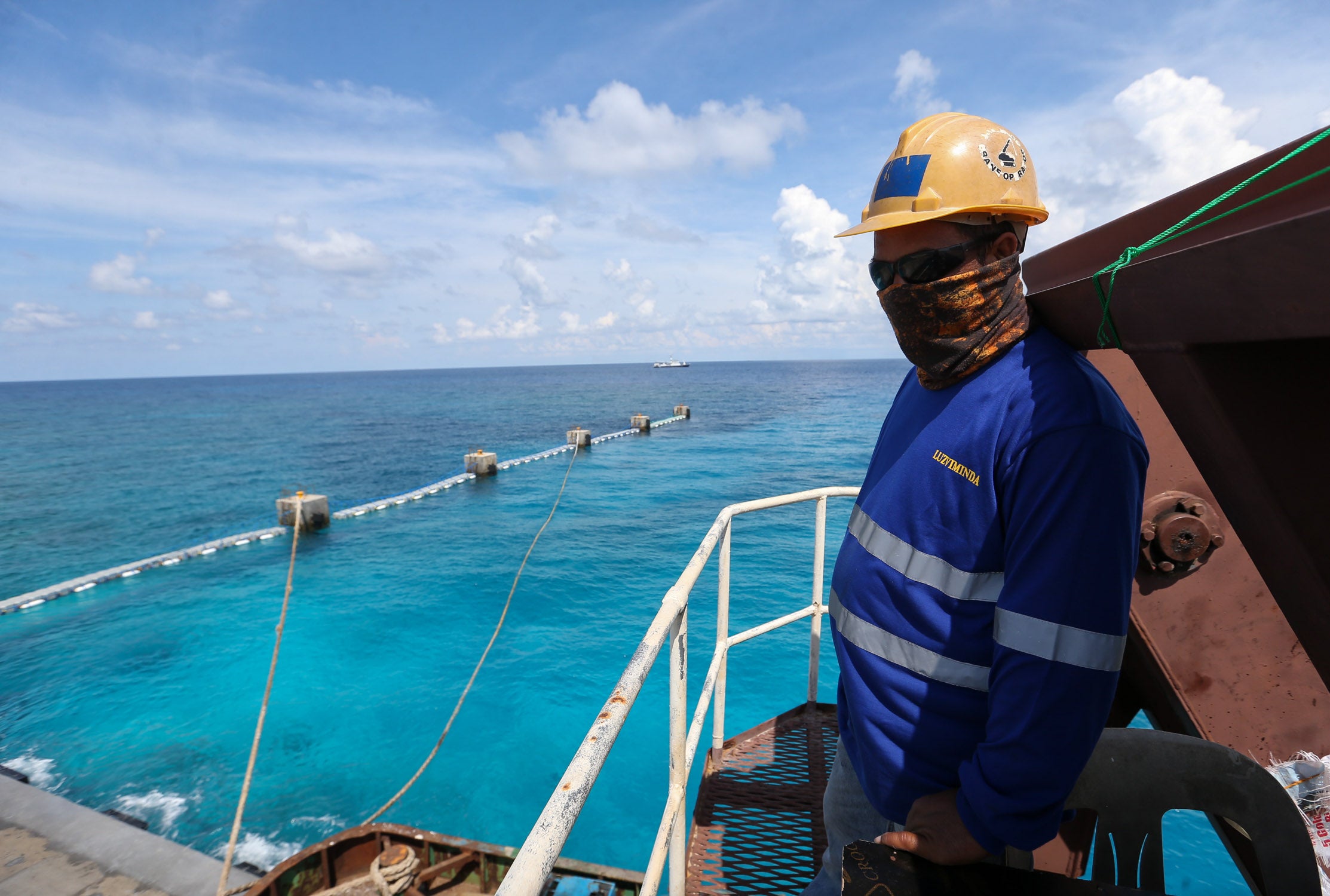 The beaching ramp is already operational and was used way ahead of its official launch.

On May 13, the heavy landing craft BRP Ivatan made a historic docking at the new port when it ferried provisions and a new batch of troops deployed to Pag-asa.

Construction of the P450-million sheltered port by Mamsar Construction began in late 2018 and also faced setbacks due to erratic weather conditions, although on a lesser scale.

The new seaport is a realization of a long-held dream of former two-term Kalayaan Mayor Eugenio Bito-onon Jr., who had been vocal in the past about his wish for a harbor and had painstakingly searched for funds for it.

“The sheltered harbor, that’s really my dream for Pag-asa,” Bito-onon said, speaking in Filipino. “This will be a big deal once it’s finished. It will greatly improve the transport of goods, people and services in and out of Pag-asa. It will also boost investments in fisheries and seasonal tourism.”

Coincidentally, the launch of the seaport was held a day after the 42nd anniversary of the creation of the municipality of Kalayaan.

But while the new infrastructures will remarkably change the way of life on Pag-asa, it would also help if the government boosted its military defenses in the area, said maritime expert Jay Batongbacal of the University of the Philippines’ Institute for Maritime Affairs and the Law of the Sea.

“The islands are small and could easily be taken by force or coercion. For the Philippines, it would simply mean catching up with China and other claimants, which have over the years invested far more in the security of the individual islands/installations than the Philippines,” he said. 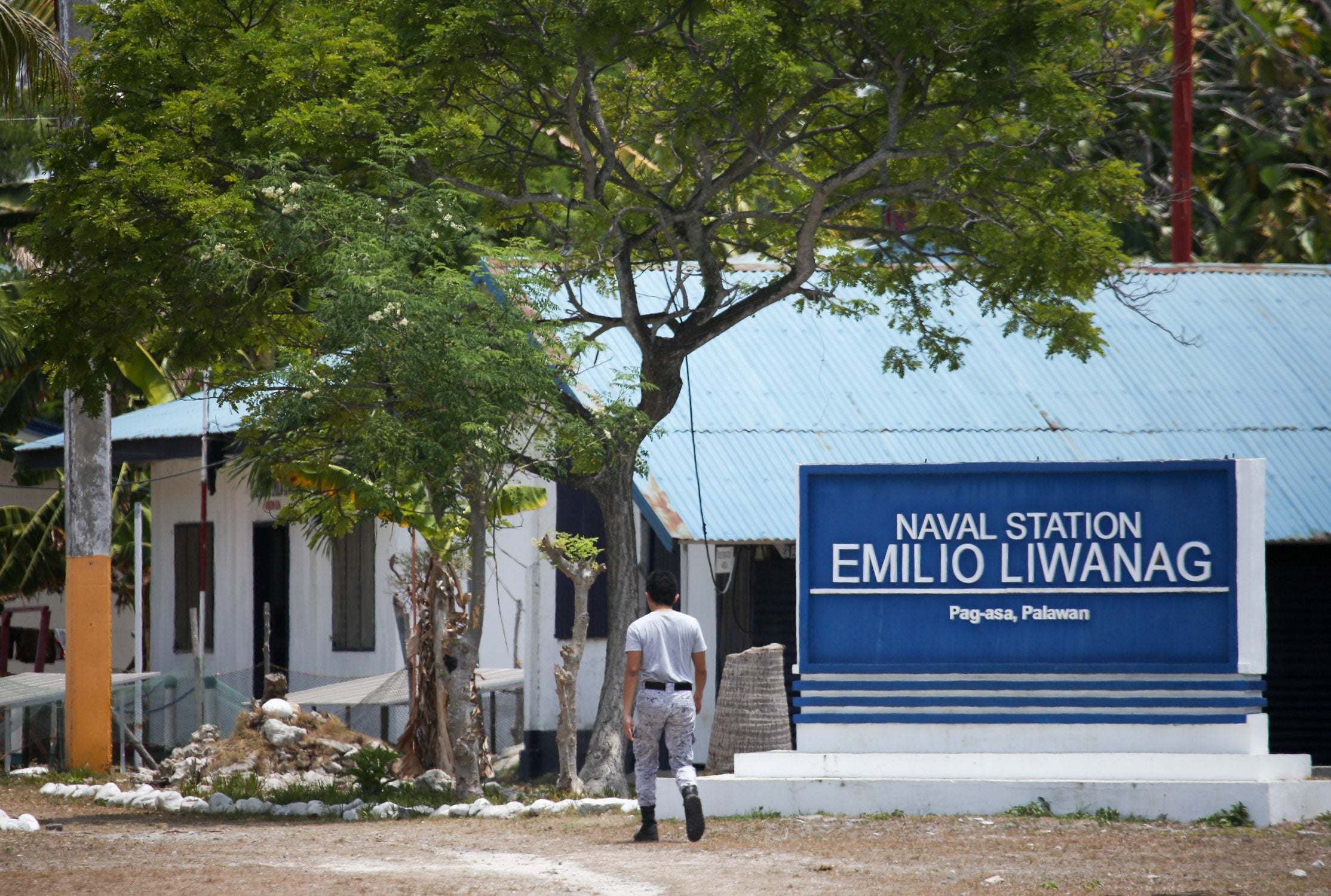 DEFENSIVE PRESENCE. The military installation on the island is named in honor of a Philippine Navy captain who served during World War II and Korean War. (LYN RILLON)

With the completion of the beaching ramp and the sheltered port on Pag-asa, the government is now setting its sights on the repair of the decrepit runway, which mirrors the neglected state of the Philippine-held islands and reefs in the West Philippine Sea.

“We can now improve further our facilities on Pag-asa, such as [making] the dirt runway into a concrete one and making the island a jumping board to the other eight islands that we possess,” Lorenzana said.

Pag-asa’s 1.3-kilometer airstrip, called Rancudo Air Field, is grassy and unpaved, with eroded tips. Only 850 meters of it is currently usable, posing a challenge to pilots to land big military planes. 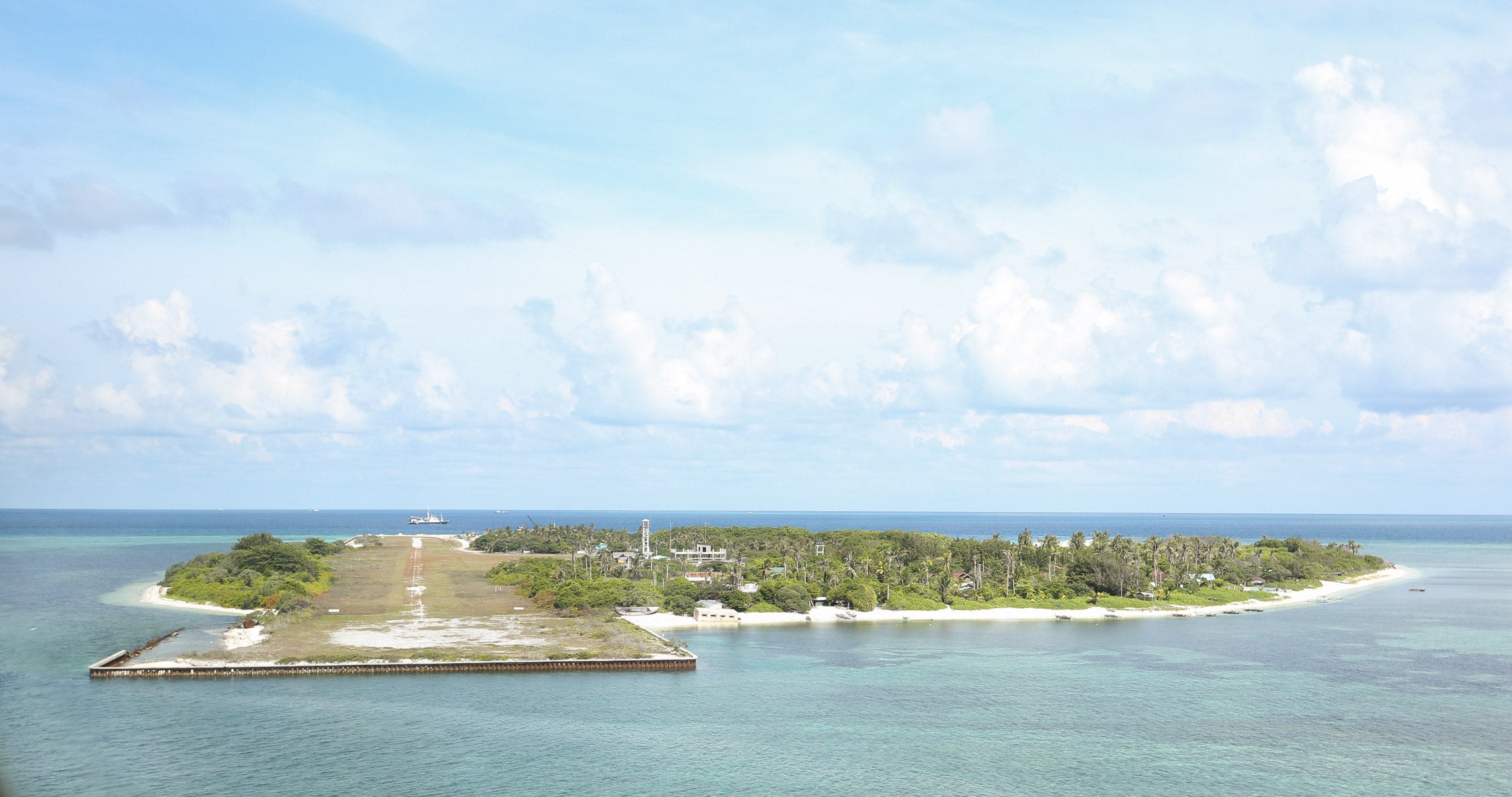 The next phase of Pag-asa Island rehabilitation project is the repair of the unpaved runway. (LYN RILLON)

At least three days straight of sunny weather and zero rainfall are needed to be able to land planes on the island. Rain turns the runway to mud, making it too soft for planes to land on.

Ironically, the Philippines was the first of the claimant-countries in the South China Sea to build an airstrip in the Spratlys in the 1970s. It has since lagged behind in development.

Fourteen miles away from Pag-asa is Zamora (Subi) Reef, which China has transformed into a sprawling military outpost with a 3-km runway, hangars, radars, missile shelters and weapons systems. It’s just one of the seven massive Chinese man-made islands in the Spratlys. 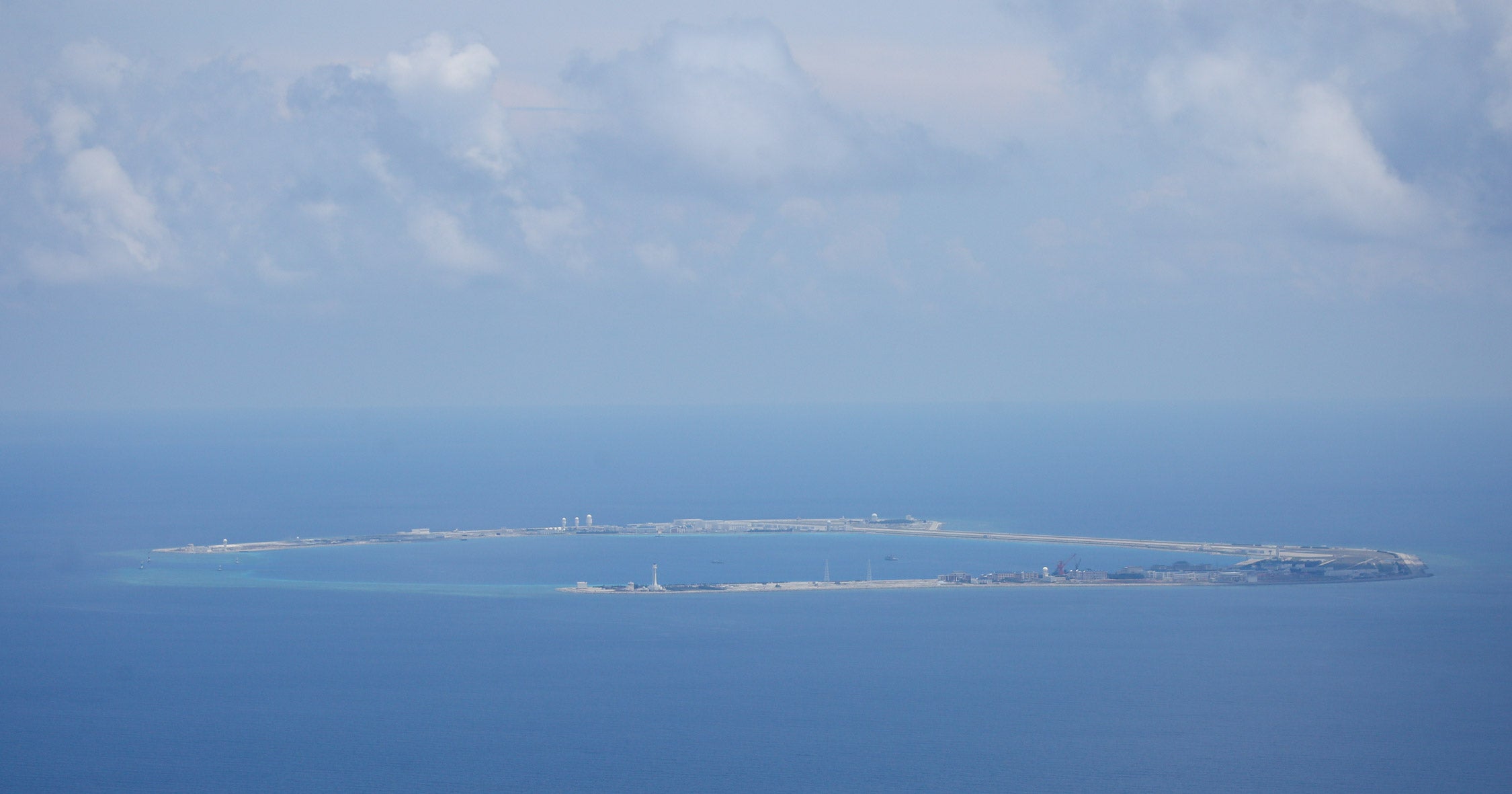 Philippine defense officials familiar with the planned rehabilitation of the runway said the project may be awarded in the next few months.

The project—to be overseen by the Philippine Air Force—will cover the paving and restoration of the runway to its original length and the construction of a parking apron.

With the construction of the beaching ramp completed, the repair of the airstrip is next. pic.twitter.com/HRwUeJgroj

Lorenzana estimated project completion within a year after the singing of the contract.

These planned upgrades on Pag-asa bolster the Philippines’ posture in the face of China’s aggression in the West Philippine Sea, according to the defense chief.

“It helps solidify our claims,” he said.