Chinese maritime militia: What can the Philippines do? |

Chinese maritime militia: What can the Philippines do? 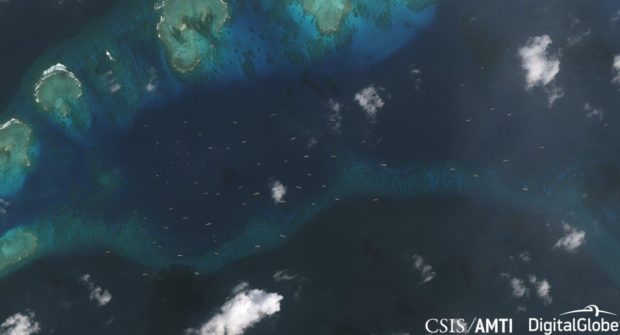 MANILA, Philippines — The Philippines has several options to challenge the presence of China’s maritime militia around Pag-asa Island (Thitu) in the West Philippine Sea, experts have said.

Dozens of Chinese vessels have been maintaining their presence on a daily basis around the Philippine-occupied island in the last three months. The military said over 600 vessels have come and gone for the first quarter of 2019 alone.

Washington-based think tank Asia Maritime Transparency Initiative (AMTI) had also reported extensively on these Chinese fishing fleets with accompanying satellite photos. It said these vessels, which are usually stationary, are not actually fishing but are merely intimidating other claimants.

The military said the vessels are likely monitoring the development work currently underway at Pag-asa Island. But despite their presence, soldiers are undeterred continuing with their patrols as construction in the area remains unhampered.

“It’s still possible, since they are vessels and they are mobile. They go where China wants them to,” he told INQUIRER.net.

He added the Philippines should keep protesting China’s actions and they should be transparent with the records of maritime militia present around the island.

“The protest is the first step. They should also be continuously monitored, and government should always make public the number and activities of militia vessels, especially if they engage in illegitimate activities within Philippine waters,” he said.

Negotiations could then follow to lay out the rules of behavior at sea. “This can include clear agreements on what they should be allowed to do or not do, communication protocols, and proper notifications.”

INQUIRER.net also sought for the insights of a few security experts for possible options that the Philippines may take amid the current situation on Pag-asa island:

“We should strengthen our civilian government on Pag-asa. (We need) a strong mayor who will represent civilian authority. Because the military doesn’t want to fight, the mayor could do it instead… Sen. Panfilo Lacson is correct. We should not advertise that we are weak. They would only bully us more.”

“The most important thing is for the Philippines not to be intimidated by this bullying and continue its plans for Pag-asa, which it is. It’s also important that all of us talk about this. China can’t be allowed to engage in this paramilitary coercion free of cost, and the only way to raise costs is with international attention. This also highlights why it is so important that the US and Philippines work to strengthen the coordination of the alliance to deter any outright aggression from Beijing.”

Maintain visible presence. “…It’s important to at least ensure visible presence – i.e. there must be a constant presence of Philippine forces to demonstrate that the Chinese boat swarms are being monitored, and just to keep them honest. This means Philippine surface and aerial assets constantly and regularly seen around the area would be the most basic to have, and which can back up diplomatic protests against Beijing.”

Beef up maritime forces. “And if there’s a situation where Philippine fishermen operating in the area are obstructed or harassed by the Chinese boats, the Philippine forces have to be able to respond in time. This of course can be coordinated with the existing bilateral coastguard mechanism between China and the Philippines in order to manage any such contingencies and prevent untoward incidents. Without timely intervention in such a scenario, it means ceding those rights to the Chinese. In order to do so… the Philippine Government needs to beef up its maritime forces presence in the area. It might be a stretch on the limited resources and capacities of the Navy, Coast Guard and BFAR, but it’s necessary not to allow a fait accompli to be dealt to Manila in the long run if Beijing believes that its strategy is left unanswered.”

Closer coordination with US. “There should also be tightened coordination with the U.S. forces for information-sharing and maritime situational awareness of the area, given that the Americans would have much better capabilities in this respect, which can thus enable timelier response by Philippine forces. The information, I believe, will also be useful as evidences that can be presented at any formal inquiry or investigative processes if incidents do happen in the area. This is also one way to call out the Chinese “grey zone” approach in the long run, by presenting credible evidences to shatter any claims they made to the contrary.”

Openly call out China. “It might be necessary, besides the ‘quiet diplomacy’ carried out, to openly call upon China to desist from such actions. This so-called ‘shamefare’ will carry the consequence of a downturn in relations (the Chinese care a lot about ‘face’ especially in the international stage). But such actions could entail open statements in public international forums (such as the UN General Assembly approach suggested earlier) that needs to be accompanied by credible evidences to prove Chinese aggression or actions that undermine peace and stability in the SCS. The ramification of such action, of course, can cut both ways – it can sway international opinion, build pressure and generate reputational costs upon Beijing sufficient to compel it to pull back the boat swarm. The other scenario is that Beijing could be embarrassed sufficiently to the point of hardening its resolve instead. So such a move needs further soul-searching.”