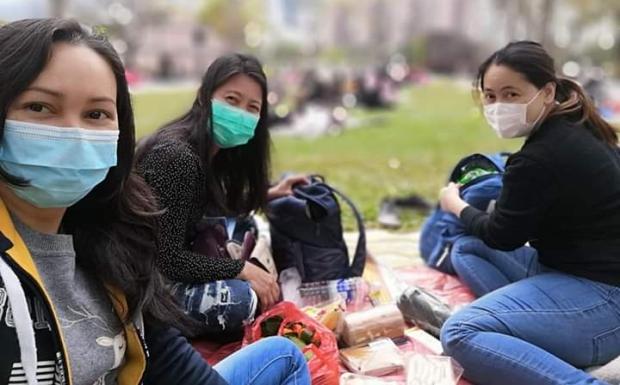 Picnic at Shatin Park for a group of Filipino workers taking their Sunday off is not the same after an nCoV case was confirmed in a residential building near them. (Contributed photo)

MANILA, Philippines — Just as the community of Filipino household workers in The New Territories in Hong Kong was preparing for a tougher life being drilled into their daily regimen by fear of the deadly novel coronavirus (nCoV), a notice posted in one of the residential buildings in the area announced what they had long feared was coming.

A resident tested positive for nCoV and her Filipino household worker was being tested for the virus as well.

“I was shocked,” said Lisa, a Filipino household worker in the area, who asked that her full name be withheld. She lives and works in the same building.

She said that, while the Filipino community in the area had been getting a barrage of news and reports about nCoV now being a reality in Hong Kong, many Filipinos had hoped the virus wouldn’t get anywhere near them.

It’s like the period of denial of someone who has just been informed he has a terminal disease.

The shock came even if the community of Filipinos, made up mostly of household employees, had anticipated and had been preparing for the worst but was praying the nightmare wouldn’t come to life.

“We were informed on 7 February 2020 that a resident was infected with Wuhan pneumonia,” read the notice posted in the building where Lisa worked, referring to another term being used by authorities there for nCoV.

“After communicating with the Centre for Health protection (CHP) of the Department of Health, the case has been confirmed,” read the notice, referring to Hong Kong’s health department.

Photos of health workers in hazmat suits wiping nearly every surface in the building in the Tai Po District with disinfectant were also posted in the building as if just a notice in text was insufficient to drive home the urgent message.

The immediate impact of the notice, according to Lisa, was tighter enforcement of an advisory for Filipino household workers to stay indoors, which meant getting stuck in their employers’ cramped units where the Filipinos normally had no rooms of their own.

While the advisory had been announced by the Hong Kong government days before, when the first nCoV case in the Chinese territory was confirmed, its enforcement was spotty at best and Filipinos who sneak out of their employers’ units are tolerated, according to Lisa.

A few groups of Filipino household employees continued to meet to exchange stories and share food in areas near their places of work in defiance of the advisory, trying to keep alive the now-famous practice of Filipino workers gathering every Sunday, their day off.

Such gatherings are important to Filipinos because it was through these where they stay connected to their home country, to each other and to their religious faith.

Lisa said when the Filipino gatherings became among the first targets of Hong Kong authorities’ measures to fight the spread of nCoV, there was among many Filipinos in her area a mix of sadness, defiance and effort to comprehend fully how serious the medical emergency was.

The impact on the ban on such gatherings issued by the Hong Kong government, however, was highly visible, according to Lisa.

Photos sent by her showed trains that used to burst at the seams with Filipinos on Sundays now nearly empty. 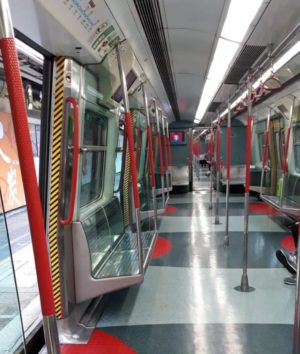 This train which normally would be bursting at the seams with Filipino workers in Hong Kong’s New Territories is nearly empty on a Sunday, Feb. 9, 2020. Sunday is when Filipino household employees usually gather. (Contributed photo)

“You can roll over inside,” said Lisa of the empty trains, which Filipinos take to go to church or the Shatin Park where Filipino gatherings are common during the Filipino workers’ day off.

A parking lot in Tai Po, which had also become known as a venue of assemblies by Filipino workers on Sundays, stood empty, too, as shown in a short video clip sent by Lisa.

Many of the dwindling number of Filipinos who take their chance to defy the advisory against gatherings do so to go to a Catholic church, which has now become a more essential refuge for Filipino household workers and their source of strength in a difficult life made increasingly tougher by the virus’ scourge.

Many employers, aware of their Filipino workers’ faith, simply turn their backs when their employees sneak out of their apartments in defiance of the advisory telling Filipino household workers to stay indoors on their day off.

As panic-buying continued in most of The New Territories and elsewhere in Hong Kong, Lisa said residents scooped up and emptied shelves not only of medical supplies, like surgical masks and alcohol wipes, but also food.

The result, she said, was an artificial shortage of meat, vegetables, seafood, cereals and other food items. It was a shortage that was mirrored by the so far still plentiful meal that Filipino workers are forced to take for breakfast, lunch and dinner — cup noodles.

Filipino household employees had been made aware that when it comes to food, their employers were the priority. So the meals of some Filipino workers, according to Lisa, became contingent on whether their employers would have leftovers. 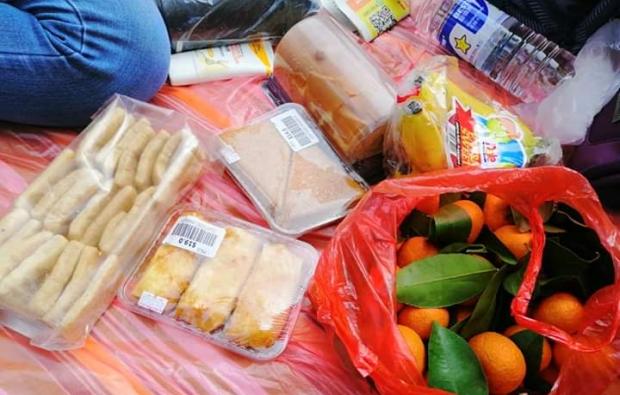 This serves as a banquet at a picnic in a time of food shortage for Filipino workers in The New Territories in Hong Kong consists of bread, water and oranges. (Contributed photo)

As fear of nCoV traveled like spark on a dynamite wick across Hong Kong, Lisa shared stories, some humorous, about how routines changed for many Filipino household workers and their bosses.

One household worker, Marvie, wrote in a Facebook message exchange with Lisa that since the nCoV scare struck, her employers had become sticklers for disinfectants.

“You go out of the house even for just one hour, when you return they would spray you with Zonrox from head to foot,” said Marvie in Filipino, referring to her employers and a brand of bleaching liquid.

“It’s good that when they sprayed that on me, I wasn’t wearing my favorite sweatshirt. Otherwise, it would turn all white,” said Marvie, punctuating her message with Hahahahaha.

Another worker recalled nearly an identical experience with her employers. She said one time she went out, and upon her return, her employers sprayed like three types of anti-bacterial liquid and water with bleach all over her, including her face.

“I now have an allergy in the face,” said the worker.

One other worker, taking part in the message exchange, said she hasn’t heard of employers asking their workers to spray disinfectant on them when they return to their apartments.

“You should also spray them so you can retaliate,” said the worker, Jen, referring to employers in her message with a laughter emoji.

The messages also became a forum for Filipino household employees to share information, like where to buy surgical masks, or what to do when an employer constantly calls you “bitch, lazy, stupid, dumb” among many other insults.

“My fellow OFWs, just want to ask where can I find and buy surgical face masks? Can’t find any,” said one message in Filipino by a household worker, Lovely.

“Sisters, my boss has stocks 90 HK dollars 50 pieces in one box,” came one reply, from Rizza, referring to masks her employer was selling for an equivalent of more than P600 per box.

One worker narrated the angry reaction she received from her employers when she went out and called up her bosses to inform them she had left the apartment.

“They were angrily shouting at me,” said the worker. “They said they would check the stock room and if anything is missing, they’ll have the police pick me up,” the worker said.

In the middle of alarm and worry over nCoV, Lisa said some Filipino workers in her area continued to meet each other during their Sunday off. The gatherings, she said, are a form of stress relievers which the workers needed more these days than at any other time. 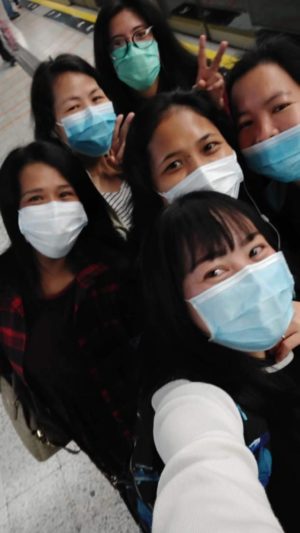 Peace is all these Filipino workers in The New Territories in Hong Kong could wish for in a time of alarm as the nCoV threat draws nearer to them. (Contributed photo).

At the Shatin Park which normally would be teeming with Filipinos on a Sunday, only up to five groups of Filipinos gathered on the day that the first confirmed case of nCoV was announced in one of the buildings where Filipinos worked.

Lisa said she and the other Filipinos brought whatever food they can to the park and set up a picnic, removing their masks only to put food in their mouths.

Arranged on what looked like a table mat on the grass at the park were plastic wrappers with bread and pastry. A plastic bag contained oranges beside a bottle of water.

Sitting around what Lisa described in jest as a “banquet,” Filipino workers wore masks but their eyes betrayed a variety of emotions. One squinted which could mean she was smiling. Two others simply stared blankly at the camera pointed at them.

In another photo, also taken in the park, the Filipino workers, including Lisa, flashed the peace sign as they wore masks in a groufie where they all appeared to be smiling.

Life goes on for them.