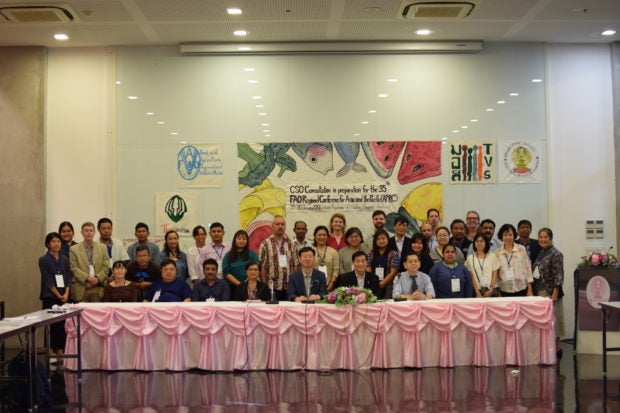 Civil society organizations (CSO) and FAO representatives with Mr. Jong-Jin-Kim, OIC and Deputy Regional Representative of FAO during the two-day CSO Consultation in preparation for the 35th FAO Regional Conference for Asia And Pacific

BANGKOK, Thailand — “Small farm families who only have 25% of the land feed 75% of the population. We feed the world not the Best Foods nor the giant food conglomerates. Yet, we are more vulnerable to exploitation, climate change, and rapid land loss due to government’s neglect,” Noland Penas laments.

Penas from Bukidnon and an ethnic Higaonon, is the national president of farmers’ group PAKISAMA (Pambansang Kilusan ng mga Samahang Magsasaka). He was one of the panelists who interacted with FAO-Regional Asia Pacific senior economist, David Dawe, and other FAO representatives during the biennial consultation in preparation for the 35th FAO Regional Conference for the Asia and the Pacific (APRC) between FAO (Food and Agricultural Organization of the United Nations) and the civil society organizations (CSO) on January 29-30, 2020 at Chulalongkorn University in Bangkok, Thailand.

According to FAO, recent years show a changing trend in the diet of the people. Data shows that there more people having diverse diets and not mainly subsisting on rice and grains and starchy foods. From the nutritional point of view, this is positive because of the reduction in obesity. On the contrary, stunting of growth among children is also widespread due to not enough calorie intake which is sourced from rice, root crops, and grains.

FAO also emphasizes the aging population in the farm communities due to the migration of the young people in the urban centers. However, it is also beneficial since the can generate non-agriculture income which may help in poverty alleviation.

However, Penas counters that migration happens due to lack of prospects and opportunities in the
countryside.

Penas also calls on the strengthening of the farmers’ group and the indigenous peoples.

“We the indigenous peoples who rely on agriculture are always victims. We are forced to abandon our indigenous knowledge of farming. Many resorted to mono-cropping which is environmentally unsustainable. Small farmers must organize to strengthen their sector.”

“The sustainability of food program depends on policy of the government. Our priority is research and development,” he says.

The proposed digitalization of agriculture and technology innovation also poses a serious challenge to
the small farm families.

Digital innovations applied to agriculture which starts in the production of the management cycle, value chain and market access from the crop, forestry, fishery, and livestock production. Known as the blockchain technology for e-commerce in agriculture, food can be traced from farm to various
markets. FAO argues that digital innovations in agriculture are touted as ‘tools and approaches to empower rural households and inspire youth entrepreneurship in food and agriculture’.

Further, it is argued that digital technology in agriculture reduced the small farm families as passive consumers of technology. Although there are potential benefits it could outweigh the negative impacts. Moreover, the CSO insists that it is not the FAO or the government that decide on the use of technology alone but most importantly it must include the participation of the people in evaluating the use of technology and how it will impact their livelihood. In addition, small marginalized farm families need tool kits and capacity building to equip themselves with the necessary skills to compete in the digital market.

Innovation is more than the issue of technology in agriculture but it is also used in the exchange of information which compromises copyrights, land rights, and human rights.

FAO Asia-Pacific Regional Conference is held every two years. Since 2010, civil society organizations have been participating in the APRC producing inputs and interventions for their own countries as well as the regions’ concerns in food production. In line with FAO’ Strategic Objectives,
the CSOs’ analysis provided governments data, issues and challenges which could help in the decision-making towards a sustainable development goals. But it was only in 2014 that more FAO representatives participating and interacting with the CSO.

“The FAO adapted some of our recommendations. Among these are the Decade of the Family Farmers, and agro-ecology and the recommendations of the Pacific Farmers on sustainable fisheries,” Penunia says.

In 2014, the 1st International Symposium on Agroecology for Food Security and Nutrition in Rome, Italy, addressed the topic of Agroecology.

According to FAO, it applies ecological concepts &amp; principles to optimize interactions between plants, animals, humans and the environment while taking into consideration social aspects needed for a sustainable and fair food system.

In 2019, the UN launched the UN Decade of Family Farming 2019-2028 in recognition to the contributions of family farmers in safeguarding biodiversity, environment, and culture. Therefore, governments are encouraged to create policies that should protect smallholder farmers and provide
access to social protection.

On their part, FAO recognizes the importance of partnership with the civil society groups.

The two-day consultation was hosted by the CSOs and in part by UN FAO (Food and Agriculture Organization). It was attended by more than 50 representatives of the different organizations which include farmers, fisherfolks and fish workers, forest dwellers, ethnic minorities and indigenous peoples, urban poor, non-government organizations, women and youth from countries in Asia and the Pacific.

The 35th FAO Regional Conference for the Asia and the Pacific (APRC) will be held in Bhutan on 17- 20 February 2020 where innovation and digital technologies that are helping to improve food security and nutrition across the region as well as the updates on African swine fever, anti-microbial resistance, plant protection and report on animal production.