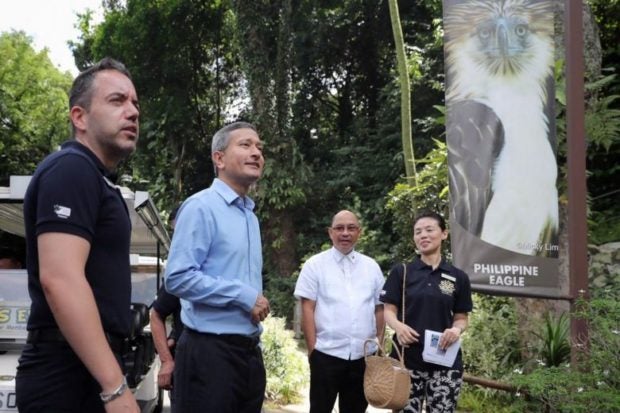 He was speaking at the launch of the Philippine eagles exhibit at Jurong Bird Park, which marks the 50th anniversary of diplomatic relations between Singapore and the Philippines.

“We have a thriving Filipino community that has contributed so much to Singapore’s development, and to our social and cultural diversity,” said Dr Balakrishnan.

Taking stock of the past 50 years, he said the two states have been cooperating in wide-ranging areas, such as the “robust and growing” economic cooperation.

He noted that Singapore was the Philippines’ top Asean trading partner and the second-largest foreign investor last year after China.

“We are glad to see that our businesses are keen to do even more in the Philippines and explore new areas of cooperation, including agri-food trade and smart city initiatives,” said Dr Balakrishnan, who is also Minister-in-Charge of the Smart Nation Initiative.

He added that the strong people-to-people ties are another symbol of the Singapore-Philippines friendship.

He shared how the artwork by late Filipina artist Pacita Abad on Alkaff Bridge was refurbished with the support of the Philippine Embassy and citizens from both countries.

Mr Ricardo L. Calderon, Assistant Secretary for the Philippines’ Department of Environment and Natural Resources, said in his speech that, over the last 50 years, Singapore and the Philippines have made great strides cooperating in areas such as education, cultural exchanges, health, labour, trade and science and technology, along with their Asean neighbours.

He added that President Halimah Yacob’s state visit to the Philippines in September had “reaffirmed the ties that bind” the two countries.

“We are also grateful to our partners and look forward to the next 50 years of bilateral relations between our two countries. With the help of our Asean neighbours, the long-term benefits of conservation actions and sustainable management of our natural resources are not far away,” said Mr Calderon.

At Wednesday’s launch of The King’s Fiesta, the Philippine eagles exhibit, Dr Balakrishnan said Singapore had signed an agreement with the Philippines for the pair of eagles in May.

The Philippine eagle, nicknamed King Bird or Haring Ibon in Tagalog due to its massive 2m wingspan, is the national bird of the Philippines. It is considered critically endangered, with only about 400 pairs left in the wild.

The two eagles here – Geothermica, 15, and Sambisig, 17 – are the first breeding pair to be established outside of their native country, said Wildlife Reserves Singapore (WRS), which manages Jurong Bird Park. Any future offspring will be returned to the Philippines.

The birds are on loan to Singapore as part of a 10-year renewable conservation breeding plan. The pair have been here since June.

“This is another wonderful opportunity to promote environmental conservation and biodiversity. It will raise awareness of the threats that these endangered birds face in the wild,” said Dr Balakrishnan.

Mr Mike Barclay, group chief executive officer of Mandai Park Holdings, which owns WRS, said the eagles are being closely monitored by their keepers and the avian care team, to increase their chances of breeding successfully.