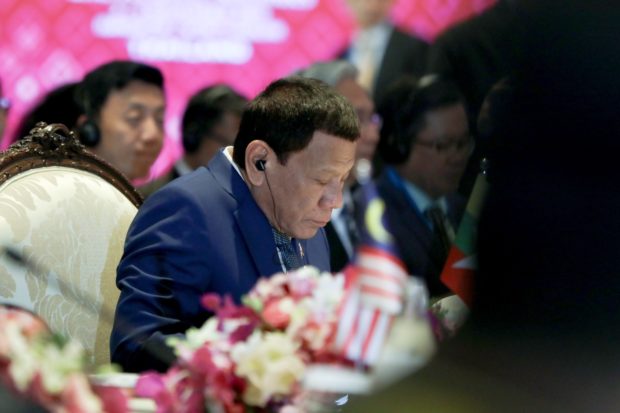 The President vowed the Philippines’ cooperation as Asean-China country coordinator in fast-tracking the long-delayed code of conduct (COC) over the disputed waters.

“As Asean-China Country Coordinator, the Philippines will do its utmost part to conclude negotiations on a Code of Conduct as soon as possible,” he said during the 35th Asean Plenary here.

“Notwithstanding the lack of enthusiasm by some external partners, I believe that we in ASEAN are one in the view that an effective and substantive COC will be good for the region.”

“ASEAN must, therefore, remain united. We must lead the way in building trust and confidence among all stakeholders. And we must use all the influence that we have, individually and collectively, to persuade parties to exercise self-restraint and avoid actions that may further complicate the situation,” the President added.

According to presidential spokesperson Salvador Panelo, the President pointed out that this issue should be resolved in accordance to the international law including the United Nations Convention on the Law of the Sea (UNCLOS).

“The Chief Executive, in elaborating geopolitical transformation, mentioned the issue of the South China Sea, which he considers as one that is of strategic importance to ASEAN,” Panelo said in a statement.

“President Duterte articulated the firm stance of the Philippines on the issue, that is, the same must be resolved peacefully in accordance with international law, including the United Nations Convention on the Law of the Sea (UNCLOS),” the Palace official added.

President Duterte and Chinese President Xi Jinping had earlier agreed to fast track the negotiations in finalizing the COC in the South China Sea.