Duterte to Asean: Don’t choose sides between China and US 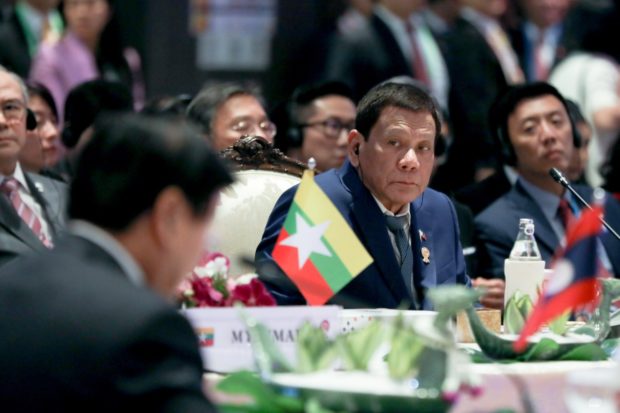 NONTHABURI, Thailand — President Rodrigo Duterte has called on leaders of the Association of Southeast Asian Nations (Asean) not to choose between China and the United States (US) which would be a “strategic mistake.”

In a statement Saturday, presidential spokesperson Salvador Panelo said the President discussed the changing regional landscape involving China and the US during the 35th Asean Plenary.

“We note that President Duterte likewise discussed the changing regional landscape which recognizes the rise of the dragon (China) in a world still dominated by a soaring eagle (United States),” Panelo said.

“He called on ASEAN leaders not to choose — or be forced to choose — sides by pointing out what he calls a ‘strategic mistake’ committed by the past leaderships of the Philippines, which he his now rectifying through his independent foreign policy,” he added.

The President also earlier urged Asean leaders to “exercise self-restraint” amid the still-ongoing dispute over the South China Sea.

He also vowed the Philippines’ commitment to fast track the crafting of the code of conduct (COC) over the disputed waters.

The President arrived here Friday night to participate in the 35th Asean Summit where leaders are expected to tackle the South China Sea issue and the mega trade deal Regional Comprehensive Economic Partnership (RCEP), among others.